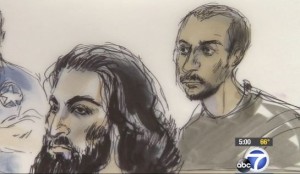 Two Anaheim muslims were arrested by the Joint Terrorism Task Force for planning to join ISIS.

Muhanad Badawi, 24, and Nader Elhuzayel, 24, both Muslim of Anaheim, were arrested late Thursday night on a charge of conspiring to provide material support to the terrorist group.

According to an affidavit in support of the criminal complaint filed Friday in court, Badawi and Elhuzayel used social media to discuss ISIS and terrorist attacks, expressed a desire to die as martyrs and made arrangements for Elhuzayel to leave the U.S. to join ISIS.

In federal court on Friday, both men rarely looked up in court.

On May 3, Elhuzayel saw a tweet from Elton Simpson, one of the two gunmen who were killed trying to attack a conference exhibiting cartoon depictions of Prophet Muhammad in Garland, Texas. In the tweet, Simpson stated that he and his “bro” had pledged allegiance to the leader of ISIS. In response, Elhuzayel tweeted his support for the attempted attack and praised Simpson as a “martyr,” according to the affidavit.

The affidavit also outlined recorded conversations between Badawi and Elhuzayel in which the two men “discussed how it would be a blessing to fight for the cause of Allah, and to die in the battlefield.”

Badawi let Elhuzayel use his credit card to buy a one-way ticket from Los Angeles to Israel via Turkey on a Turkish Airlines flight.

Badawi was arrested at a gas station in Anaheim near his residence, the Vintage Crossings apartment complex on South Street. A woman there did not comment on the arrest or identify herself, but sobbed about what happened. She did not speak much English, but she told Eyewitness News that federal agents took laptops and other items from the home.

Elhuzayel was arrested at Los Angeles International Airport as he tried to board that Turkish Airlines flight to Turkey. Elhuzayel’s parents told Eyewitness News that their son was traveling to spend the summer with relatives. However, Elhuzayel admitted after his arrest that he planned to disembark in Turkey to join ISIS and did not intend to travel on to Israel, according to the affidavit.

Elhuzayel lives with his family at the Crystal Inn in the 700 block of South Street. Federal investigators served a search warrant in room 118 after his arrest at LAX. Damage to the door could be seen from when agents apparently kicked it in during the raid.

“They stole my computers from the car. They took my check books, my credit cards. Everything was gone,” said Falak Elhuzayel.

Elhuzayel’s mother told Eyewitness News that he and Badawi were classmates at Cypress College. Elhuzayel’s parents say their son may be gullible, but he is not a terrorist.

After the court proceedings, Badawi’s public defender said he plans to plead not guilty.

“They’re like a needle in a haystack, and they appear to be American citizens that are going about their regular business, but then they decide to flip the switch and go operational,” Gomez said.

There is no known threat to the Los Angeles region based on this case, officials said.

Assistant US Secretary of State for International Security and Nonproliferation, Thomas Countryman, recently visited Israel and held talks with senior...