The demographic trends are clear: Europe is committing suicide. The fertility rate to maintain a country’s population, known as the replacement rate, is generally considered to be 2.1 births per woman. The average fertility rate in Europe is 1.6. In Germany and Italy, it is 1.4. To increase its population, Europe has let in immigrants, to the point that they comprise some 10 percent of the population in Spain, the U.K., the Netherlands and Germany. In Austria, their proportion is 15 percent.

A significant number of those immigrants are Muslim. They hail from the lower rungs of society in their countries of origin and decided to leave in search of a life of comfort in the West.

But the influx of millions of immigrants from Asia and Africa is more than just about their socio-economic plight. Islamic thinkers have tried to capitalize on this wave. Although these thinkers are still lying in wait, they hope they can eventually use the immigrants as a means of conquering Europe. This strategy has been propagated by Islamic theologian Yusuf al-Qaradawi for the past 30 years. Qaradawi has tremendous clout in the Sunni Arab world, to the point that his rulings are considered authoritative by the Muslim Brotherhood. The strategy is terribly simple: Tap into the local Muslim community and lure its teens to the “real” Islam, then go up the rungs of power in the major parties and seize the reins of government through the democratic process.

The late Libyan dictator Moammar Gadhafi talked about this phenomenon in 2006. He essentially partnered with the West by preventing a mass exodus of migrants from his country. But the West threw him under the bus, and it is still reeling from that costly decision: Europe has since grappled with the massive flow of immigrants from Africa. On April 23, the EU’s 28 member states held emergency talks on immigration (after the tragic capsizing of several boats), only to emerge with general statements that all but ignored the heart of the matter. One decision, for example, centered on Italy’s proposal to hit Libyan boats before they could set sail for Europe (the proposal was rejected). 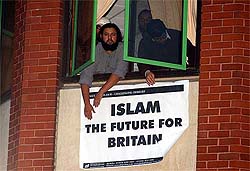 The “Muslim Brotherhood Strategy” has borne fruit. The fourth generation of European Muslims are more religious than their parents and their grandparents. In the U.K., 40 percent of Muslims said Shariah law should be the law of the land in predominantly Muslim areas. In 1989, just 7 percent of Muslims aged 25 or younger attended mosques once a week. In 2011, the figure stood at 23 percent. Some 90 percent of France’s Muslims fast on Ramadan and observe Islamic dietary laws. French President Francois Hollande owes his job to Muslim voters — he won 85 percent of their votes, which essentially decided the election.

But there is another Muslim entity that considers immigration as a means to take down the West: the Islamic State group. It has two goals. The first is to upset the demographic equilibrium by inundating Europe with Muslims. The second is to send terrorists into the continent and spread fear across Western European nations. Having captured the city of Sirte on the Libyan coast, Islamic State can now go about implementing its plan: 500,000 Libyans will leave on boats toward Europe, which will inevitably result in a humanitarian crisis on the high seas. The West will be forced to intervene and grapple with the ethical dilemma of letting in potential terrorists disguised as immigrants. The second part of this plan was manifested recently, when several Islamic State supporters disseminated pictures of themselves at key Italian landmarks while holding signs that warned of an impending attack.

For Israel, the plan presents danger all around. First, the European Muslim community (especially younger Muslims) is vehemently anti-Zionist with clear anti-Semitic tendencies. As a result, European governments, which need the Muslim vote, may feel compelled to get tough on Israel and boycott Israeli products. Second, because the Muslim Brotherhood and Islamic State view the Jews as the number one enemy of Islam, Islamists are likely to have Jewish targets in the crosshairs (this has clearly the been the case over the past 12 months in Denmark, Belgium and France). Israel should ask its best and brightest to come up with creative solutions and find ways to increase the West’s public awareness of this lurking danger. They have to devise effective plans to scale back the immigration of Muslims to the West. It will help Europe and, by extension, Israel.

In Case You Missed It:  Get Ready for the Economic Collapse
Posted in Terrorism and tagged dhimmitude, Europe, Immigration, Jihad, Mosques, Muslims, Terrorism.

For more than three decades, they have sought out and killed Americans. In 1983, in one of the first major...