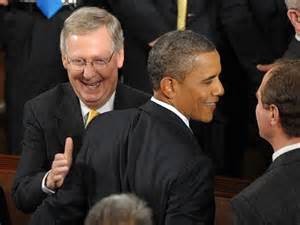 The much maligned “odd couple” tryst between Democrat Barack Obama and Republican Mitch McConnell became dramatically more intense Friday when Obama took the extraordinary step of announcing that he (the president) has established a new cabinet level position title and has appointed McConnell to the post on a permanent basis, effective immediately.

Obama’s full statement as released by the White House:

“I am very pleased to announce today that an important trade bill has advanced in the US Senate because of Herculean efforts involving unselfish, bipartisan concern for the best interests of America by the Majority Leader of the US Senate, my good friend and ally, Mitch McConnell.

Senator McConnell has proven that when people stand together in order to do the “right thing,” miracles can happen and American lives can be improved forever.

Because of the inspirational nature of Senator McConnell’s work, and the urgent need for that level of cooperation during the remainder of my term, I have established a new cabinet position, reporting directly to me, to promote bipartisan energy and fervor for work that transcends everyday political back and forth.

This new cabinet post has been established by issuance of my Executive Order of May 21, 2015. As such, the appointment does not require Advise and Consent of the Senate, nor any other action or confirmation by any congressional body.

Senator McConnell will assume the new position immediately and will remain in that position until my administration ends in January, 2017.”

And so it is that Mitch McConnell joins the Obama administration as the first official Token RINO in America’s history!

In Case You Missed It:  OBAMAGATE: Obama and Biden were up to their necks in the Flynn persecution
Posted in Freedoms.

Homosexual "marriage" is one of the fastest-moving social issues in U.S. history, having become legal in state after state. One thing is slightly off-kilter:...