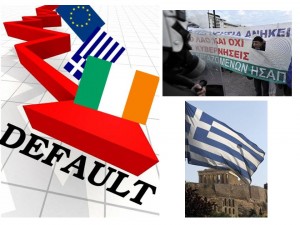 Athens (AFP) – Greece warned Sunday it has no money to repay the International Monetary Fund on time in June unless a deal is reached with its creditors, in a stark warning that the country could be just days away from defaulting.

Athens already had a close shave in May, when it was only able to scrape together the 750 million euros ($845 million) due to the IMF then by raiding its emergency reserves.

With the clock ticking down to four more debt instalments from June 5, Interior Minister Nikos Voutsis told Mega TV that the country has nothing left for the IMF in its coffers.

“The instalments for the IMF in June are 1.6 billion euros ($1.8 billion). This money will not be given. There isn’t any to be given. This is a known fact,” Voutsis said.

Nevertheless, the minister believes that negotiations between Athens and its creditors were taking place “on the basis of cautious optimism that there will be a strong agreement”.

Greece’s radical-left government has been locked in negotiations with its creditors — the IMF, the European Union and the European Central Bank — for the past four months in a bid to unlock some 7.2 billion euros in bailout cash.

The Syriza government, which was elected in January on its anti-austerity promises, has so far refused to agree to key economic reforms that the creditors want in exchange for the rescue funds.

But with a punishing debt repayment schedule in the next three months, the country now desperately needs the rescue funds.

In addition, the government has running costs to meet, including salaries to civil servants and pensions.

Last week, the parliamentary spokesman for Syriza said that the government would be unable to honour a repayment to the IMF on June 5 as its priority is to pay salaries, pensions and running costs.

“No country can repay its debts with only the money from its budget,” Nikos Filis told Ant1 television.

While ramping up its warnings of a looming default, Greece’s government has also refused to budge on its anti-austerity promises.

“We have done what we ought to do, now it’s Europe’s turn to do so,” Prime Minister Alexis Tsipras said in a speech to his radical-left Syriza party’s central committee on Saturday, where he claimed the country is “in the homestretch of a painful and difficult period”.

According to Mega TV, Tsipras had asked US Treasury Secretary Jack Lew to help persuade the IMF to agree to delaying all four June repayment installments to the end of the month.

In an interview with the BBC on Sunday, Greece’s Finance Minister Yanis Varoufakis also warned: “We have done remarkably well for an economy that doesn’t have access to the money markets to meet our obligations. At some point, we will not be able to do it.”

For some in Syriza, it was perhaps time to think about simply leaving the eurozone.

“Who says that if we exit the eurozone and we return to the national currency this will be a disaster?”, asked Energy Minister, Panagiotis Lafazanis during the Syriza’s Central Commission session on Sunday.

His group within Syriza, the Left Platform, circulated a letter on Sunday urging the government not to meet the IMF payments if the creditors insist on their “blackmailing attitude”.

Others in the ruling party are less radical, including MEP Dimitris Papadimoulis who called on Syriza to accept “difficult compromises” in order to reach an agreement and avoid a “disastrous” breakdown in the talks.

Local media have reported that the creditors are seeking a further 5 billion euro reduction in the government’s budget through measures including more pension cuts and lay-offs.