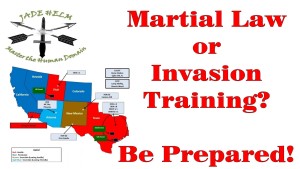 Most Americans obviously don’t know their history for if we did, we would be much more outraged and disturbed about the Jade Helm 15 military operation. Why? Because we’ve seen eerily similar situations play out in our nation before. In fact, this situation was a precursor to the first American Revolution.

Concurrent with the captive corporate media’s feeding frenzy vilifying patriots and other citizens concerned about Jade Helm 15 by calling them conspiracy fanatics, government officials in various cities, counties and municipalities are welcoming American troops to their towns with open arms, apparently having no clue of the event that precipitated the American Revolution. These local officials are intellectually hobbled and history-deficient, for if they cracked open a history book, they would understand that throwing down a welcome mat for troops in their towns is an invitation to eventual bloodshed.

Nobody, it seems, has raised any Constitutional objections about this operation against the backdrop of the Third Amendment of the Bill of Rights. I’ve yet to hear any politician, local, state or municipal governing body or political pundit discuss the implications of this “exercise” in the historical context of the American Revolution and the Bill of Rights.

To be clear, the Third Amendment to the U.S. Constitution reads as follows:

No soldier shall, in time of peace be quartered in any house without the consent of the owner, nor in time of war, but in a manner to be prescribed by law.

So what does this have to do with the upcoming Jade Helm operation and in a larger sense, the use of American troops on the streets of America? Or, even more broadly, the militarization of our police forces?

Heavily citing Radley Balko’s Rise of the Warrior Cop, the author notes that “the historical context behind the Third Amendment shows that the Framers [of the Constitution] were worried about something more profound than [quartering soldiers]. The amendment was a placeholder for the broader aversion to an internal standing army.”[1]

As Balko outlines in exquisite detail, our Founders had a much deeper concern than housing American soldiers, especially when our national defense is at stake from a foreign enemy. “At the time the Third Amendment was ratified, the images and memories of British Troops in Boston and other cities were still fresh, and the clashes with colonists that drew the country into war still evoked strong emotions. What we might call the “Symbolic Third Amendment” wasn’t just a prohibition on peace time quartering, but a more robust expression of the threat that standing armies pose to free societies. It represented a long-standing, deeply ingrained resistance to armies patrolling American streets and policing American communities.”[2] [Emphasis mine].

While it is beyond the scope of this article to delve deep into the backdrop for the Third Amendment, a robust understanding of the laws and actions leading up to its ratification is absolutely essential to understand the events taking place in present day America. It is critical to note that the principles behind Jade Helm 15, as well as the hybrid militarization of our police contain the very components that led to the first American Revolution.

That begs the question… is the American royalty itching for a second American Revolution?

Even the most ill-informed among us know that Colonial America evolved from England and was settled by men fighting against the tyrannical oppression of the English Commonwealth laws at the hands of British royalty. Despite this new settlement in a new land, American colonists were still subjects of the British Crown and its far-reaching laws, including the quartering of soldiers. But there was a much more sinister application than merely quartering soldiers for the ostensible purpose of national defense.

As American colonists began to vociferously object to the quartering of British soldiers in the homes and businesses of colonists on American soil, they were met with a push-back by the British Crown with yet another law, the Quartering Act of 1774. Stakes were raised when the British soldiers were permitted to enter private homes without warrant and seize whatever they found, from cash to other assets, including real property, citing the slimmest of criminal allegations. If this sounds familiar, one should consider this historical tyrannical overreach against today’s civil asset forfeiture laws, where the template of tyranny has merely been updated and refined.

As stated by Mr. Balko in Rise of the Warrior Cop, “The actual quartering of British troops in the private homes of the colonists was rare, at least up until the start of the American Revolution. It was the predictable fallout from positioning soldiers trained for warfare on city streets, among the civilian populace, and using them to enforce laws and maintain order that enraged colonists. Contemporary newspaper accounts documented frequent and increasingly bitter altercations between soldiers and citizens. Bostonians were British subjects, but were being treated like enemies of the state. They began to interpret the stationing of troops in their city as an act of war. [3] [Emphasis mine]

The rest, as it is said, is history.

History is being repeated

Whether orchestrated or unwittingly, history is being repeated, and not in a good way. It would be difficult to ascribe the actions of our government leaders who are militarizing our police forces and placing military troops among the civilian populace as mere incompetence or lacking a basic understanding of events that led to the American Revolution.

This is no small matter, for we are following the same pattern that existed in the immediate run-up to the War for Independence. This time, however, it is our own military that is being used against true American patriots who have been systematically and incrementally redefined as terrorists and enemies of the state. It is the militarization of the police forces throughout America that has served as the precursor and subtle integration needed to market this otherwise unpalatable, undesirable and un-Constitutional concept to modern America. Too many are finding this militarization process acceptable, while too few are seeing the process for exactly what it is intended to be.

Much like the events that precipitated the first American Revolution, we are bearing witness to an orchestrated tyrannical takedown of our civil liberties. Yet instead of understanding and discussing the potential and arguably intended subjugation of those who disagree with the politics of American royalty and their objectives for complete enslavement over we, the people, we are seeing nothing more than sophomoric discourse by those who are intellectually bankrupt, naïve, or complicit.

Accordingly, we are being rushed headlong into a second revolution which promises to be much bloodier and costlier than the first. Additionally, it opens the door wider for foreign takeover from which there will likely be no recovery.

Be warned, for if history tells us anything, war from within is at our doorstep.

In Case You Missed It:  FOUR TIMES more vaxxed people are dying than unvaxxed... depopulation effects are kicking in and the bodies are piling up
Posted in Freedoms and tagged martial, Revolution, United Socialist States of America.

Portions of the USA Patriot Act expired at midnight after the Senate failed to reach a deal. Supporters of the...