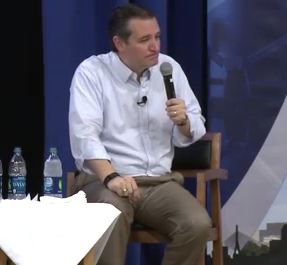 By RS: This clip of Ted Cruz talking about islamic terrorism, both here and abroad, is awesome. But it’s the ending on how he plans to deal with ISIS that got people to their feet in a standing ovation. Here’s what he said:

ISIS is the face of evil. We need a president who stands up and says we will defeat radical Islamic terrorism.

Right now we have a photo-op foreign policy. Drop a bomb here, a missile there. You know, the radicals say they reject modernity, GREAT! We need to send them back to the stone age.

BOOM! That’s exactly what we need in a president.

Watch the clip below and be sure to watch to the end:

Greece has moved closer to default and possible exit from the eurozone after telling the International Monetary Fund it would...