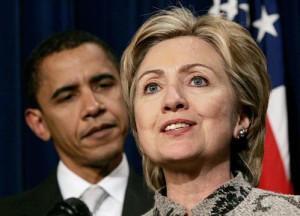 But wait. If the next CNN survey shows Clinton actually behind one or two or three of the GOP candidates, it won’t be just shocking. It will send Democrats into a near-panic over the possibility of losing the White House in 2016, even with their preferred candidate, Clinton, as nominee.

Such a poll result isn’t far-fetched as we watch Clinton’s campaign deteriorate. True, head-to-head matchups this early in the presidential cycle are almost never predictive. But in this case, it’s the psychological impact that matters.

That Clinton’s candidacy is in trouble is indisputable. She’s not threatened with losing the Democratic nomination—at least not yet. She has the well-financed Clinton machine and a national network of supporters on which she can rely. The campaigns of her Democratic opponents are small and weak in comparison.

But the rationale for her bid for the presidency, the strategy of her campaign, and the tactics she’s adopted—all have failed to stop her steady decline. The expectation of Clinton’s glide into the White House in 2016 is gone.

What is the rationale for her candidacy? President Obama had a big one in 2008. He would reform Washington, end polarization, promote bipartisanship, and bring about change. As a campaign message, it was appealing. As we now know, his real intentions were different. But Obama had a rationale for seeking the presidency. Clinton doesn’t.

In place of a rationale, there’s an assumption that her prominence, her résumé, and the likelihood of her becoming the first woman president would make her a uniquely appealing candidate. They haven’t. She’s a terrible candidate. She has not only failed to attract big crowds. She’s having trouble raising big money from those described by Politico as “rich liberals.”

The old adage that opposites attract may apply in her marriage. Bill Clinton is charming, has wonderful political instincts, is a compelling speaker, and has a common touch. She lacks all four. Also, Bill is dynamic. She is lifeless as a candidate.

In early May, she published a piece in the Des Moines Register. It was uninspired. “Because this campaign isn’t going to be about me, it’s going to be about Iowans and people across our country who are ready for a better future,” she wrote. Not about her? Please.

Despite three previous campaigns—two Senate, one presidential—Clinton seems ill at ease as a candidate. Presidential candidates are usually better the second time they run. She’s worse. Unexpected adversity may cause her to become a tougher and more sure-footed candidate. So far, it hasn’t.

Clinton’s troubles tend to be self-inflicted. It was her decision to operate her own email system while she was sec-
retary of state for four years. It was her and her husband’s decision to mingle her State Department decisions, his high-priced speeches, and the Clinton Foundation in a suspicious fashion.

When those deeds became public, Clinton responded as she and her husband have in the past. She’s adopted a full stonewall, refusing to answer the questions of reporters covering her campaign. The idea behind this tactic is that time will kill the media’s interest in subjects the Clintons don’t want to discuss. It hasn’t worked.

On the emails, the State Department sought to help its ex-secretary. It was slow-walking the review and subsequent release of the emails—those she hadn’t selectively deleted. But a federal judge ordered a batch of her emails to be made public each month. This won’t help her campaign.

Nor has the issue of the Clintons and their foundation dried up. On the contrary, fresh instances of dubious conduct—arguably unethical or greedy or both—by the Clintons continue to come to light. The latest involves $750,000 paid for a Bill Clinton speech by a Swedish company followed by Sweden’s absolution of the company for violating trade sanctions against Iran.

Stonewalls can work, but not forever and not in the midst of a presidential campaign. A minimal requirement of candidates is that they converse with the press. It looks bad when they don’t. It looks like they’re hiding something.

There’s one more problem of Clinton’s doing: her mad dash to embrace the left wing of the Democratic party. After being paid hundreds of millions for speeches to Wall Street firms, she now says the very wealthy in America must be “toppled.” She promises to legalize more illegal immigrants than the five million Obama has. And so on.

Given all this, two more problems have dropped in the lap of Clinton’s campaign. One is the increased attention her Democratic opponents are getting. Democratic voters are suddenly interested in hearing their pitches. And former New York City mayor Mike Bloomberg has popped up as a possible entrant in the Democratic race against Clinton.

That’s the least of her worries at the moment. Her bigger problem is trust. The CNN poll asked if Clinton is “honest and trustworthy,” and 57 percent said no. A Washington Post-ABC News poll asked the same question, and 52 percent said no.

Matchups against other presidential candidates are evanescent. Voters change their minds repeatedly at this stage. But a personal judgment of a candidate’s basic honesty is not a fleeting opinion. It cuts more deeply. And reversing a negative judgment doesn’t happen overnight. It can doom a candidate and sometimes does.

NASHUA, N.H.—Former Texas Gov. Rick Perry promised during a campaign stop today that he would reform the Department of Veterans...