Former Florida Governor Jeb Bush’s speech that launched his presidential campaign on Monday noted that Hillary Clinton’s “progressive agenda” includes the admonition that traditional religious beliefs “have to be changed.” Mrs. Clinton’s entire quote, in talking about opposition to her version of feminism and demands for abortion, was that “…deep-seated cultural codes, religious beliefs and structural biases have to be changed.”

Bush also said of the Democrats, “They have offered a progressive agenda that includes everything but progress.”

But it’s never been the case that the progressive agenda offers real progress, as ordinary people understand the term. Instead, the “progressives” offer what Professor Paul Kengor calls cultural Marxism. This is the planned disintegration of the traditional family structure that has been the basis of Western civilization. Kengor, author of the new book, Takedown: From Communists to Progressives, How the Left Has Sabotaged Family and Marriage, told me in an interview that the progressives are guided by the belief that “new rights are coming all the time and that everything is in a state of evolution.” He added, “There are no absolutes for them.” Hence, the gay rights movement has now morphed into rights for so-called transgenders, as we see in the relentless media propaganda that is designed to convince the public that men can, and perhaps should, become women. Kengor says the next step is for “progress” or “evolution” to a new level that includes such concepts and arrangements as multiple wives, group marriages, sibling marriages, fathers and stepfathers marrying daughters and stepdaughters, and uncles marrying nieces.

It’s no secret that Bill and Hillary Clinton’s family structure exists in name only. Bill, the disgraced former president impeached by the House, betrayed Hillary and had sex with a White House intern. He is a serial adulterer. But the Clintons have stayed together for political reasons, so that Hillary can pursue her political career. Together, along with daughter Chelsea, this arrangement has generated nearly $2 billion in donations to a family foundation that now finds itself embroiled in financial scandals over where the money went, and what it paid for.

Hell to Pay: The Unfolding Story of Hillary Rodham Clinton

Looking back on Mrs. Clinton’s career, I continue to be struck by the wisdom of Barbara Olson, the author of the 1999 book Hell to Pay: The Unfolding Story of Hillary Rodham Clinton.Olson was the lawyer and conservative commentator who was murdered by Islamic terrorists when the aircraft she was on, American Airlines Flight 77, was hijacked and flown into the Pentagon in the September 11, 2001, attacks. The crash killed 125 people on the ground and another 64 passengers and crew.

I interviewed Olson on December 8, 2000, when I hosted a radio show in the Washington, D.C. area. What follows is an edited transcript of that interview.

Q: Do you believe that Hillary Rodham Clinton is a Marxist?

A:  I believe she has a political ideology that has its roots in Marxism. In her formative years, Marxism was a very important part of her ideology…But when you look at her ideas on health and education, you see more government and less individual control. You see very little regard for families…

Q: Do you see Hillary as in favor of Socialist-style thinking at the global level?

A: We saw that with her activities as First Lady. She traveled more than any other First Lady. She had a global view. She spoke at the Beijing conference on women. She was very active in organizations and conferences that seem to be concerned about human rights but which are also directed toward a centralized governmental view. That is, one world. I looked at her travels and saw what she was doing. I always assumed Hillary was going to run for president. And I assumed that these international travels and her work with the Beijing women’s conference and the U.N. were going to be her way into the White House; that she was going to have a foreign policy platform that not many women have…

Q: So you do believe that she will run for president?

A: I do. She believes her ideology to the core. She’s worked for it behind Bill Clinton for years. I have thought that Hillary was going to run for the White House since 1993 when I started investigating the Clintons. She doesn’t compromise. She doesn’t come to the center. She believes in a true leftist, Socialist kind of government.

Q: She portrays her causes such as children’s rights and women’s rights in such an attractive manner. She has put conservatives on the defensive once again.

A: She has. That’s the central focus of her public relations campaign…But her ideas about health care and education have very little to do with women and children. They are the lever she uses to bring the government into the family.

A: Yes.  We all know about her book, It Takes a Village. She says the future is not family but the larger village of teachers, pediatricians and social workers. She talks about raising children as less of a parental task than a social one…You have the destruction of the family unit. That’s very basic when you study socialism and Marxism.

Mrs. Clinton’s speech to the Women in the World Summit, where she spoke on how religious beliefs have to be changed, was significant for several reasons. The event was sponsored by Tina Brown, who launched The Daily Beast and later became editor-in-chief of Newsweek. The event was conducted in association with The New York Times, and included actress Meryl Streep and comedian Jon Stewart. These were the elites of the progressive media and Hollywood. 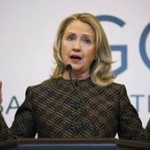 Marxists use family-friendly jargon to confuse and mislead

Typically, Mrs. Clinton talked about families at the event. “We know that when women are strong, families are strong,” she said. “When families are strong, countries are strong.” It’s important to understand this comment in light of her own failed marriage, which she has held together for political purposes, and how she has adopted the entire progressive agenda regarding how traditional families have to be changed to accommodate new sexual rights and new “family” structures. Olson’s book is still important in order to understand what Mrs. Clinton means by families, and how Marxists use family-friendly jargon to confuse and mislead. Kengor’s book is absolutely essential to understand how the progressive agenda would continue to transform the nation under a President Hillary Clinton.

Jeb Bush’s presidential campaign announcement demonstrated that he is aware of the political and semantic games that the modern-day progressives are playing on the American people. If he focuses on this Marxist strain in the Democratic Party in order to identify the forces that are rotting America to the core, he will find many conservatives receptive to his message. At the same time, if he pursues this course, the progressives in the media who gathered around Hillary Clinton during that April feminist summit will come down on the former Florida governor like a ton of bricks.

Will Bush follow up with a full frontal assault on the progressive forces destroying America? Or will he wilt under pressure and make nice with those prepared to destroy the country he wants to lead?

By Dr. Ileana Johnson Paugh It is a tune many failed socialist nations have heard before. When the mainstream media...