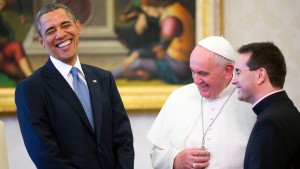 Forgive the impertinence, but is it not odd that Pope Francis is behaving more and more like a leftist politician than the vicar of a great, world wide church?

From his aggressive stance in the climate change debate, to his role in bringing Communist leader Raul Castro of Cuba together with US interests, to recent remarks about Capitalism, Pope Francis seems to be adopting a far more strident message.

As reported at reference 1:

Pope Francis has called the unfettered pursuit of money “the dung of the devil” in a strongly worded condemnation of the global treatment of poor people. Speaking on Thursday at the World Meeting of Popular Movements in Santa Cruz, Bolivia, Francis also told Christians it is their “commandment” to fight for the “just distribution of the fruits of the Earth.

“The Dung of the devil, your Holiness?

Were it not for references to Christianity and deity, the Pope’s message could be a sound bite from an Barack Obama speech in which the US president slams American capitalism and business, interests while demanding re-distribution of wealth.

And being like Hussein Obama is NEVER a good thing!

MANCHESTER, N.H. – During a meet and greet here Friday, Sen. Lindsey Graham said that it has “been a tough...