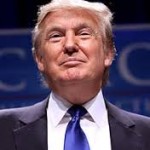 While the media and so many faces that pop-up on TV screens doubt that Donald Trump will win the nomination, fact is, Trump leads the GOP pack this week according to many polls and now YouGov latest poll also confirms it.

Here, take a look at the bars below. They speak for themselves: 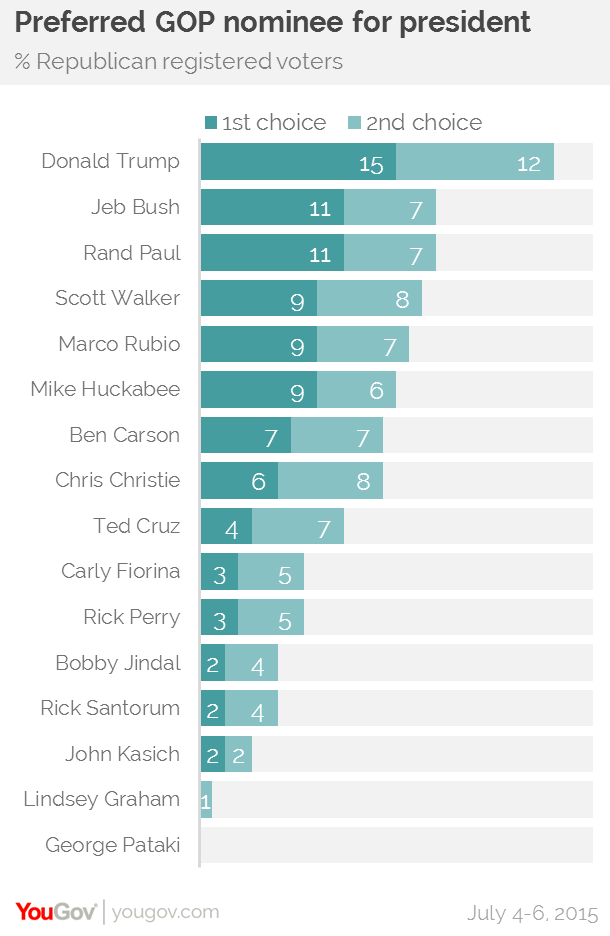 “Trump looks even better as a candidate this week when Republicans are asked for their second choice. When they are, Trump extends his lead. One in four Republicans who are registered to vote say he is their first or second choice.”

When it comes to all the media talk and talking-heads with conflicting opinions on who will win the nomination for the Republican or the Democrat parties, to me it does not take rocket-science. Let me be Trump honest and Trump blunt. While Trump’s hair flies in the wind, he looks more presidential than the rest of the republicans and democrat candidates combined. He has a general Patton charisma and his bluntness reflects the American way.

On the democrat side we have two old geezers, Bernie Sanders (who contributed a manifesto on sexual freedom) and Hillary ‘Rotton’ Clinton (Islam’s favorite hag). Both are hags and have little charisma and panache as they appeal mostly for the mentally ill and people with all sorts of social disorders. Sanders and Clinton are simply two old socialist fogies who belong more in Russia before the wall came down. While Americans complain about Putin, had Hillary and Bernie been Russian, who in Russia today will vote for Hillary or Bernie during Communism or after its collapse? Even from an American view where looks are said to be everything, they really look terrible and Hillary Clinton doesn’t only look like the tired, old, mean woman, she really is a tired mean old woman.

The more these talking heads criticize Trump, the more the people love him.

The reason is simple. When I lived in the Middle East it was the world of the top-dog. When I came to America, I witnessed how Americans went for the under-dog. By ‘top-dog’ or ‘under-dog’ I do not mean winners vs. losers, what I mean is bullies vs. victims. Trump, while he is becoming the victim of slander, ridicule and mockery, Americans don’t like it. Americans are a very unique bunch of people. While Americans go through all sorts of sexual revolutions and act crazy in all sorts of ways, they, in the end, (when push comes to shove), they put down all the sex and all the crazy parties and they fight.

What few consider is that Trump will not muster in Republicans only, but he will also gain many democrats who are tired of the status-quoe. From our simple analysis, we predicted that Trump will lead even before he announced his nomination. On April 14th, and while most were skeptic he would even run or even make it we stated:

“I suspect Trump will run, win and rid us from one wicked wretch: Hillary Clinton.”

In Case You Missed It:  Church Attacks Explode With ‘an Unbridled, Roaring Fury’

By John W. Lillpop It’s January 20, 2017 and America has been saved from the evils of tyranny, illegal invasions,...