Russia, in order to fight against the homosexual tyranny that is plaguing the entire Western world, has created its own flag in pride of the family and the natural order: 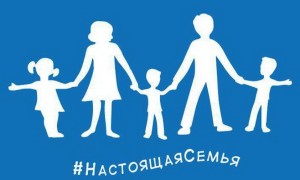 According to one Russian report:

Copies of the flag, which feature the outlines of a man and a woman holding hands with three children, were shown to Izvestia by Andrei Lisovenko, deputy head of the United Russia branch in Moscow. The flags also come printed with the Russian-language hashtag “A Real Family.”

According to Lisovenko, the flag will have its official unveiling at Moscow’s Sokolniki park later Wednesday, where hundreds of people will gather for a United Russia rally in honor of the Day of Family, Love and Fidelity, which the country celebrates annually on July 8.

United Russia’s decision to unveil a “heterosexual flag” comes after the U.S. Supreme Court ruled to legalize same-sex marriage in late June, when the White House was lit up in the colors of the rainbow flag traditionally associated with the LGBT community.

“This is our response to same-sex marriage, to this mockery of the concept of the family. We have to warn against gay-fever at home and support traditional values in our country,” Lisovenko was quoted as saying by Izvestia.

Homosexuality is not illegal in Russia, but a law passed in June 2013 bans the promotion of “nontraditional” sexual relations to minors. A survey by independent pollster the Levada Center in May found 37 percent of Russians think homosexuality is a disease that needs to be cured.

After news broke of the heterosexual flag’s design, it didn’t take long for microblogging site RIP Novosti — which describes itself as “an anonymous, humorous blog” — to cast doubt on the flag’s originality.

It posted a photo to its Twitter account of a similar flag bearing the symbol of La Manif Pour Tous, an anti-gay marriage movement based in France. The latter features two rather than three children, but is otherwise almost identical to United Russia’s.

The Day of Family, Love and Fidelity is a relatively new celebration in Russia, having only been introduced in 2008. In honor of the holiday, divorces have been banned for the day in four Russian regions — Tula, Amur, Kaluga and Kurban — the Lenta.ru news site reported.

The tyranny of Sodom is everywhere. Just look at what happened in Argentina in May. A sodomite named Mario Tolosa, who was the vice president for a sports club, raped a six year old boy in a soccer club. The judges, Horacio Piombo and Ramón Sal Llargués, sentenced him to only 38 months in jail, because, as Horacio said, the child “showed signs of a transvestite conduct”. In other words, it looked like the child was homosexual, therefore he must have enjoyed it and the pedophile should not really be punished for it. The aunt of the victim said:

This is the homosexual tyranny. It preys on children, it preys on parents, it preys on souls. Russia is a nation that is fighting against this new world order, this imperialistic tyranny that seeks to control the world through the despotism of confusion. All of this evil, all of these sinister people controlling the world, following their leader, “the prince of this world” (John 12:31), and in the midst of all this darkness, the only hope there is is the One by Whom all of humanity is united, the hope of mankind, Jesus Christ, to free our minds and souls from the shackles of tyrannical confusion. Through the Savior we rebel against the tyrant, we over throw his tyranny, we establish liberty.

We have to prepare our minds and intellect for this spiritual war that we are in.

In Case You Missed It:  Cases of vaccine-induced VAIDS on the rise due to mass covid vaccination
Posted in Freedoms and tagged Christians, Eastern Europe, Freedom, homosexuality, Russia.

By Theodore Shoebat From suing Christian businesses, now the sodomites are trying to sue the Bible itself! A homosexual deviant...