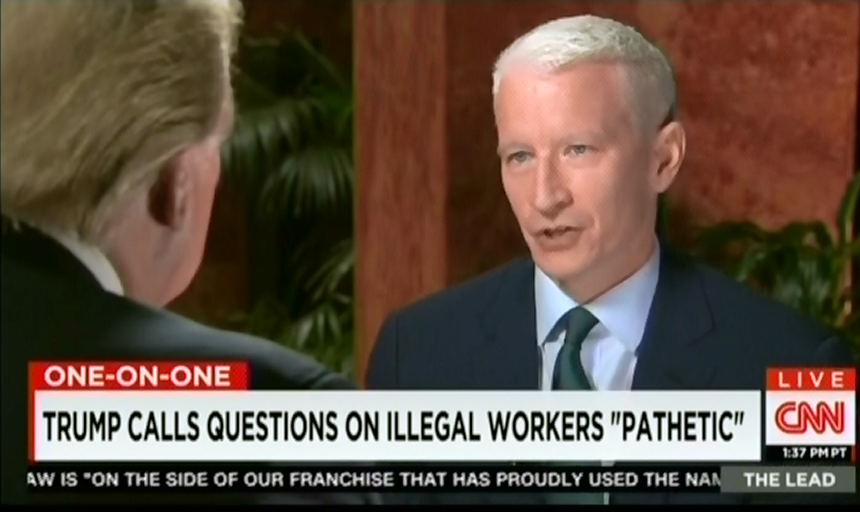 Cooper appears to have based his argument off of a recent Salon article published a day prior to the aforementioned interview. The Salon article, “This proves Donald Trump is lying: Here are the actual facts on immigrants and crime,” also engaged in the deceptive sleight of hand to their readers. Their first sentence asserted, “Donald Trump opened his 2016 presidential campaign with an epic rant against Mexican immigrants.” A few sentences later and Salon doubled down on their dishonest assertion: “He went on to tell CNN that the threat lies not just with Mexican immigrants, but with immigrants in general.”

Salon then tripled down:

Here is what you need to know: immigrants are less likely to commit crimes than people born in the United States. A 2013 Pew Research Center study found that across all people aged 12 to 24 (the teen and young adult years when almost all criminal activity first begins) immigrants were much less likely than the U.S.-born to have committed a crime in the last year.

By intentionally using the term “immigrant,” Trump’s detractors battle a strawman. They cite studies focused on all immigrants, not just illegal aliens who enter the U.S. secretly and illegally. They mix statistics from legal immigrants with the far-fewer number of illegal aliens in the United States, causing the crime numbers to look better for illegal aliens.

Perhaps the argument against Trump that used the most trickery appeared in the Washington Post. Their July 2 article, “Surprise! Donald Trump is wrong about immigrants and crime,” also referred to Trumps comments against illegal immigration as remarks against “immigration.”

Again: Trump specifically talked about illegal aliens, not all immigrants (the Post’s attempt at mathematical prowess and conjecture will be debunked throughout the remainder of this article). The Post insisted on focusing the discussion on all immigrants, even though Trump clearly spoke about illegal aliens from Mexico and clarified himself multiple times on this point. Still, the Post asserted:

On CNN on Wednesday night, he offered a defense to anchor Don Lemon.

Every part of that is incorrect. He did say his comments about Mexico — explicitly. And data show that new immigrants —  including illegal immigrants — are actually less likely to commit crime, not more.

Notice it didn’t matter what Trump said. They acknowledge his clarification and then insist on continuing to keep the conversation on all immigrants. They imply to their readers that they focus on data about all immigrants in the U.S. from Mexico, but then shift to using data that focuses on all immigrants in the U.S. from the entire world to attack Trump. In addition to these issues with the Post article, the paper failed to inform its readers that the actual study cited first appeared in 2012 and was based largely off of information gathered in previous decades.

Can data from previous decades accurately represent the current illegal immigrant population in the United States?

A lot has occurred with illegal immigration since 2012 and prior decades and it is quite possible that the types of individuals who would attempt an irregular migration effort into the U.S. have changed. A leaked law enforcement sensitive intelligence report obtained and published by Breitbart Texas indicated that the perceptions in populations south of the U.S.-Mexico border changed significantly after the elections and policy changes of President Barack Obama. The irregular migration attempts began to see a significantly higher success rate; simply put, a broader selection of illegal immigrants were being allowed to stay in the U.S. and the knowledge of this spread throughout Central American communities. Foreign-born individuals who perceived that they had no chance of staying in the U.S. due to a criminal past would now perceive that they might have a chance of succeeding in an irregular migration effort, especially if they arrived in the U.S. with a minor.

By shifting the conversation to include all “foreign born” people in the United States, the illegal immigration apologist crowd dilutes the numbers of crimes committed per capita in the U.S. illegal alien population by adding 300 percent more people to the mix. The 300 percent being added are legal immigrants. Legal immigrants often must have a clean record to be legal immigrants and they have already exhibited a tendency to follow rules and laws—even at great personal expense to themselves. Adding them with the illegal alien population dilutes the crime numbers and percentages to the point that they no longer represent the reality discussed and debated.

Even the most often cited study used to back up the illegal alien apologists, a 2012 study that was later published in a quarterly, Bianca E. Bersani (2014) An Examination of First and Second Immigrant Offending Trajectories, Justice Quarterly, acknowledges significant faults with their own study. In the conclusion, the author writes:

What would the crime rate be if only the illegal immigrants who are in the U.S. were considered?

Unfortunately, due to official record-keeping and crime data reporting practices that only record certain crimes, in addition to the fact that the academic groups who have resources to study the matter routinely insist on grouping all foreign born individuals together in their research, we simply do not know. The only options Americans are left with is to use anecdotal data to best try to develop an accurate picture of the crime rates in the U.S. illegal immigrant population.

We know that many illegal aliens come here to work, but what else do we know?

We know that in Texas alone, U.S. authorities deported approximately 2,000 previously convicted sex offenders per year for a three year period. We do not know the data for other states, nor do we know the current data because the federal government refuses to share it with the public.

We know that in January of 2014, U.S. Customs and Border Protection reported a 100 percent increase in the number of previously deported sex offenders crossing into Texas from Mexico in one border sector. There are nine border sectors on the U.S.-Mexico border. We do not know the numbers or percentages from the other eight sectors.

We know that some illegal aliens serve as human traffickers (not to be confused with helping smuggle people.)

We know that in a three-day span of 2014, 50 previously convicted felon illegal aliens were apprehended in Texas by U.S. immigration authorities. The crimes included rapes, sexual assaults, drug possession, robbery, and other assaults.

We know that some illegal aliens run stash houses in Texas and keep nearly 100 people against their will.

We know that many illegal aliens try to kill U.S. Border Patrol agents by smashing their faces and heads with large rocks.

We know that many illegal aliens are MS-13 gang members and go on murderous rampages in the United States.

We know that some illegal aliens come to the U.S. to rape women.

We know that some illegal aliens work for Mexican cartels and enter the U.S. to carry out assassination plots here.

We know that Mexican cartels are expanding meth operations in the U.S. and that theysend illegal aliens here to run their U.S. operations for them.

We know that illegal aliens sometimes come to the U.S. to attack and ruthlessly beat elderly women to the point of unconsciousness.

We know that many illegal aliens who come through Mexico into the U.S. are from terror nations in the Horn of Africa.

We know that some illegal aliens are connected to transnational criminal groups and get caught in the U.S. with $1.16 million in drug money.

We know that the deadly MS-13 gang has an estimated 6,000-10,000 members in the U.S. and that most of them are foreign nationals from El Salvador, Honduras, Guatemala, and Mexico, according to the FBI. The FBI National Threat Assessment addresses the gang and asserts:

They perpetrate violence—from assaults to homicides, using firearms, machetes, or blunt objects—to intimidate rival gangs, law enforcement, and the general public. They often target middle and high school students for recruitment. And they form tenuous alliances…and sometimes vicious rivalries…with other criminal groups, depending on their needs at the time.

In Case You Missed It:  CRYPTO CARNAGE and market mayhem foreshadowing the “mother of all collapses” to come
Posted in Freedoms and tagged CNN, Illegal Immigration, lie, media, President Donald J Trump.

As Senate Stalls, House Conservatives Push for Repeal of Obamacare Through Reconciliation

As Senate Republicans continue to discuss using reconciliation to roll back provisions of Obamacare, House Conservatives are encouraging their colleagues...