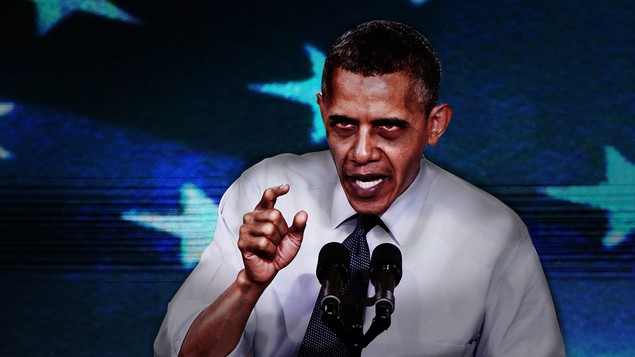 “Iran has the right to a peaceful Nuclear program”- John Kerry

We have seen this administration literally slam the only democratic country in the Middle East, and our ally, Israel. Officials in the White House have called Netanyahu a “chickenshit,” used taxpayer dollars to oust Netanyahu out of office, and even refused to meet with him while visiting the United States.  However, while Iran screams death to America and Israel, our fearless leader signs a nuclear deal with Iran that literally sets them up to have nuclear bombs within 5-15 years.  Nuclear bombs that could literally destroy Israel and the United States and end the very lives of our children and grandchildren.

Back on the home front, the Obama administration has refused to enforce our immigration laws and as a result, taxpayers are on the hook for homes, food, education, and healthcare for all illegals and their families residing in the United States. Our school system is overcrowded, communities have exceeded budget constraints and are going broke trying to educate and pay for the millions of dollars required to house and educate illegals within our communities.  Local governments were never consulted before planes, trains and automobiles rolled into their towns releasing illegals into their communities. All under the blanket of protection of President Obama.

This administration has also released hundreds of thousands of illegal criminals back into our communities with devastating results. Thousands of Americans have been killed because of the release of these criminals. The most recent being Kate Steinle, 31 and an expectant mother was gunned down by an illegal immigrant felon who had been deported 6 times for criminal behavior. A 13 year old girl was kidnapped and sexually assaulted by an illegal in Florida. Sabine Durden’s son Dominic was killed by a drunk driver, also an illegal alien. The families of Jamiel Shaw Jr., Don Rosenberg, Lupe Moreno, and Brenda Sparks, are just a few of the other families that have lost loved ones because of the actions of illegals in the United States.  Yet President Obama has remained silent about these deaths all while stepping up to the plate and attending funerals of criminals killed by police, hyped up by the press as white on black hate crimes.

Obama wasted no time holding a press conference claiming Treyvon Martin could have been his son before the trial had even begun in the Zimmerman case. He wasted no time in sending three White House officials to attend Michael Brown’s funeral, who was killed while trying to take a police officer’s gun after attempting to rob a convenient store. That was three more than were sent to attend former British Prime Minister Margaret Thatcher’s funeral last year and none were sent to the funeral for Maj. Gen. Harold Greene, the highest-ranking U.S. military officer killed in combat since the Vietnam War.  The Obama administration devoted considerable resources to the Michael Brown shooting and sent Attorney General Eric Holder to Ferguson, as well as dozens of investigators prior to any of the facts being revealed. However, the Obama administration refuses to comment or offer condolences to the family of Kathryn Steinle, whose death was a direct result of Obama’s refusal to enforce United States deportation laws.  Although the White House claims it does not have the time to comment on all victims of crimes, Obama found ample time to meet with four convicted drug felons in order to support his release of 45 prisoners. And let us not forget the phone call he made to Sandra Fluke to make sure she was okay after negative comments were made regarding her snit fit over a Catholic University refusing to pay for her birth control.

How can any of us forget President Obama’s condescending comments about Republicans who were demanding our border be secure? President Barack Obama noted the steps taken by his administration to strengthen border security, but said Republicans in Congress were never satisfied and mocked that they will want a “higher fence” and then “a moat,” and then “alligators in the moat.“They’ll never be satisfied. And I understand that. That’s politics.”

However, if our borders were, in fact, secure, as Obama claims, how did all these convicted felons return to the United States after being deported time after time after time? Now add insult to injury, Democrats are pushing to not only give driver’s licenses to illegals but the right to vote in our local and national elections. Are the lives of American citizens really expendable in order for Democrats to gain more votes?

By Sher Zieve Since Barack Hussein Obama and his criminal Syndicate took over the US White House in January 2009,...