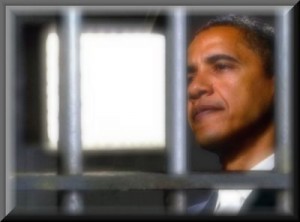 By most sane accounts, Barack Obama is regarded as the worse, or one of the worse, presidents in US history. Take away the “sane” qualifier however, and there are those think The One deserves even more time in which to “fundamentally destroy America” and her storied history and blessed culture.

Among those who actually believe that Obama deserves a third term, and possibly more, is The One himself, the indisputable Champion of Narcissism, self-adoration, and denial through self- deception.

If we are to take Obama at his word, never a prudent idea by the way! one is amazed at the misconceptions and untruths that have taken up residence in this man’s tyrannical mind.

For instance, as reported:

President Barack Obama said Tuesday that he could win a third term in office if he ran again but that he is barred by the Constitution.

“I actually think I’m a pretty good President. I think if I ran, I could win. But I can’t,” Obama ad-libbed during a speech in Ethiopia. “There’s a lot that I’d like to do to keep America moving. But the law is the law, and no person is above the law, not even the president.”

To the unwary, do NOT be lulled into a false sense of complacency by The One’s words about the Constitution, not being above the law, and all of that!

Remember, Obama said essentially the same thing about his ability to unilaterally revise standing immigration law against the will of the people and the Congress.

He proclaimed his helplessness, while at the same time executing the dastardly Executive Orders which would have all but outlawed deportation of invading criminals, regardless of how despicable, especially Hispanic invaders likely to vote straight Democratic for several generations of decadence and third-world transformation of civil American society.

Thankfully, Obama’s immigration Executive Orders were put in abeyance by a court of law, where they will be subjected to intelligent review by more than one hysterical tyrant looking to build a legacy on the back of uneducated, unskilled, non-English speaking parasites at the expense of American language, culture, and heritage.

Face it, patriots: Obama’s trashing of the Constitution to allow unfettered access to illegal alien criminals, and his foolish importation of Islamic terrorists from Syria and elsewhere are an integral part of The One’s evil, vain desire to hold on to power, no matter what the Constitution says.

In sum, Barack Obama does not respect the US Constitution, existing law, or the history and culture that yielded the same.

So angry and bitter is The One that he is determined to replace the Caucasian-originated Constitution and law with instruments that favor people of color—-even if such instruments are based on racist tyranny!

Woman in Israel Arrested for Speaking Negatively About Islam

by Daniel Pipes Israel Hayom July 28, 2015 As most non-Muslim visitors to the Temple Mount in Jerusalem can attest,...