(Conservativepapers.com)  If convicted, the police offers Tensing could go to prison for life, said Hamilton County Prosecutor Joe Deters in a press conference. Tensing was wearing a  body camera that recorded the footage of the entire incident.

The driver was stopped for breaking the law – no front tag displayed.

The driver was asked if the car was his and he said yes. Moments later he said it actually belonged to someone else – LIE #1.

The driver was asked if he had his driver’s license on him and he said yes. Moments later he said he didn’t have it – LIE #2.

At this point it’s a no brainer for the officer – arrest the driver.

The driver had no driver’s license and was evading the officer’s questions at every chance he got AND the driver kept moving his hands and body all over the front of the car (which tells an officer that he is most likely looking for something; something to harm the officer with or the driver is just acting extremely nervous, which is another clue there is something wrong).

PROBLEM to be solved before the arrest can be safely made; make sure the vehicle is in park, the ignition is turned to off and the keys are in the custody of the officer: BUT the driver WOULD NOT turn off the car. Watch the video as the car was running as the driver drove the car away after getting shot.

The officer was actually pretty relaxed, was chatting with the driver if he lived around there & figured the driver simply had no license or it was suspended and wanted him to exit the vehicle so he could put him into custody (in cuffs in his back seat) as is customary when one wants to follow up the investigation SAFELY (notice others were walking around the car), call for backup and make the arrest.

Remember this driver still resisted to even give his name up to now.

AT THIS POINT – the officer showed ZERO sign of racism, ZERO aggression, tried his absolute best to get the driver to answer simple questions like “what is your name” all the while figuring the driver is drunk, driving with a suspended license and other simple misdemeanors stemming from the traffic stop. NO BIG DEAL, but he has to arrest the driver and let the court figure the rest out!

IN OTHER WORDS – a pretty normal stop for the officer.

Here is where it turns for the worse…

The officer asked the driver to exit his vehicle –

The driver said no!

The officer then asked the driver to take off his seat belt (either the driver was going to exit the vehicle himself or the officer KNEW the seat belt would cause extraction problems).

The driver again, said no!

At this point, the officer KNOWS if he just stopped right there to call for backup, the driver would have driven away – possible causing life threatening actions to bystanders not to mention felony evading!

The officer DOES NOT WANT THIS TO HAPPEN!

The officer gave the driver EVERY POSSIBLE way to get out of this situation ALIVE, but the DRIVER REFUSED all help from the officer.

The officer, based on his training, put his hand in the car to turn off the ignition to AT LEAST KEEP the driver from driving away and possible killing someone. Remember the guy just handed the officer a bottle of gin, and is evading every question imaginable.

This is when the driver resisted and grabbed/pulled on the officer’s arm. This is called “assaulting an officer”, just ask any lawyer, judge, magistrate, etc.

Based on the proximity of the assault and in a split second, the officer has to determine whether this constitutes a threat to his life or those around him.

Based on training the cop pulled his weapon that would stop the person as quickly as possible.

Maybe the cop could have pulled him arm out safely and ran away, but he did what his training told him what to do – protect himself, protect others and gain a tactical advantage while doing so.

A second video  from the body camera of an arriving officer shows Tensing lying in the road before he gets up to run toward DuBose’s crashed car. He was obviously thrown down onto the pavement for some reason, either by the driver or from the moving car are the most likely probabilities.

Watching the video over & over, it almost seems like it could’ve been an accidental discharge. Like perhaps he was trying to grab the driver with his right hand and forgot his index finger was on the trigger.

The officer’s life was in danger:
1. When he stopped the vehicle and approached it.
2. Especially when the driver would’t turn off the ignition.
3. While bystanders are walking around the scene.
4. Interviewing a suspect that is intentionally evading every question.
5. Interviewing a suspect who is moving about the cabin of the vehicle without reason.
6. When he is about to make an arrest KNOWING it will be difficult.

No investigation! They fired the officer and charged him with murder.

NO TRIAL yet! Every black and liberal talking head has him guilty and convicted from the start. 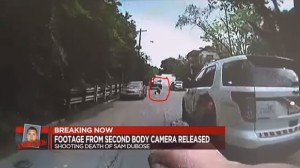 Second video from an arriving officer shows Officer Tensing lying in the road.

In Case You Missed It:  The Center for Public Integrity pays a "journalist" to harass and terrorize family members of vaccine skeptics, all while claiming to protect the "public trust"
Posted in Freedoms and tagged blacks, Crime.

How to Make the Case to Liberals That Conservatives Have Hearts, Too

Being conservative in a politically correct culture has never been easy. Whether you’re a politician trying to explain a controversial...