The 2016 primaries are in full momentum following months of build-up, officially kicking off on Thursday night in prime-time as the ten leading Republican candidates squared off for the first time. 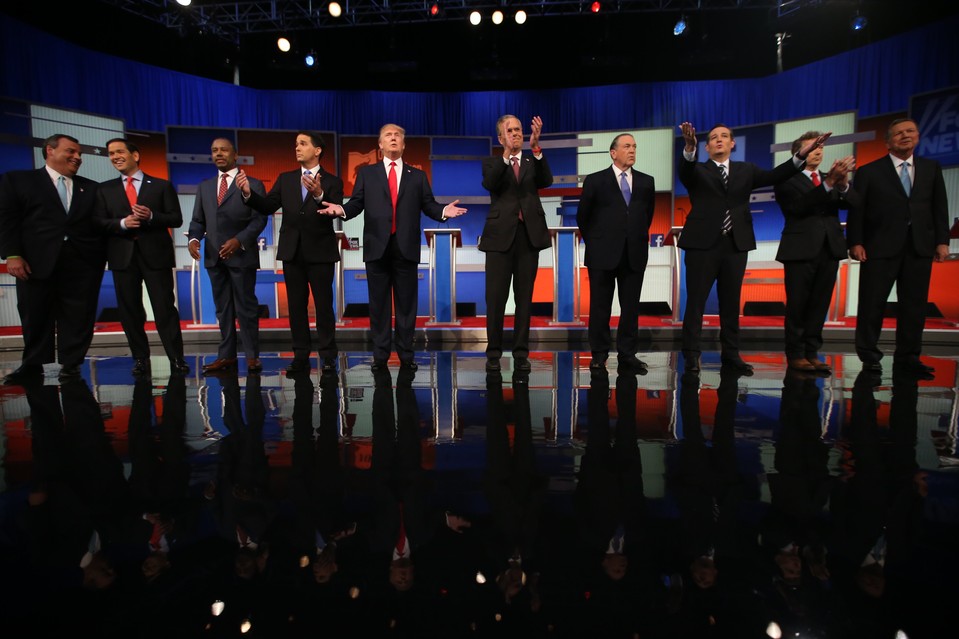 The 10 highest-polling candidates in the Republican 2016 presidential field took the stage tonight at the Quicken Loans Arena in Cleveland, Ohio, for the first debate of the election.

The candidates addressed a number of policy issues such as the Iran deal, illegal immigration and the economy, which remains one of the most important issues among American voters.

Here’s what the 10 GOP presidential candidates had to say on the issues:

Paul: “ISIS rides around in a billion dollars worth of U.S. Humvees … We didn’t create ISIS—ISIS created themselves, but we will stop them, and one of the ways we stop them is by not funding them, and not arming them.”

Kasich: “I had an opportunity to bring resources [from Medicaid] back to Ohio to do what? To treat the mentally ill. Ten thousand of them sit in our prisons. It costs $22,500 a year to keep them in prison. I’d rather get them their medication so they can lead a decent life. Secondly, we are rehabbing the drug addicted. Eighty percent of the people in our prisons have addictions or problems. We now treat them in the prisons, release them in the community and the recidivism rate is 10 percent and everybody across this country knows that the tsunami of drugs is threatening their very families.”

Bush: “I believe the people coming here illegally have no other option. They want to provide for their family, but we need to control our border. … There’s much to do, and I think rather than talking about this as a wedge issue … the next president will fix this once and for all so we can turn this into a driver for high-sustained economic growth. … There should be a path to earned legal status for those who are here, not amnesty.”

Trump: “We need to build a wall, and it has to be built quickly. And I don’t mind having a big, beautiful door in that wall so that people to come into this country legally.”

Rubio: “This is the most generous country in the world when it comes to immigration. There are a million people a year who legally immigrate to the United States, and people feel like we’re being taken advantage of. … Let me tell you who never gets talked about in these debates—the people that call my office who have been waiting for 15 years to come to the United States, and they’ve paid their fees, and they’ve hired a lawyer and they can’t get in. They’re wondering if they should come illegally.”

Trump: “[A single-payer system] works in Canada, it works incredibly well in Scotland. It could’ve worked in a different age… What I’d like to see is a private system without the artificial lines around every state.”

Rubio: “The Department of Education, like every agency, will never be satisfied. They will not stop with it being a suggestion. They will turn it into a mandate.”

Bush: “I don’t think the government should be involved in the creation of standards directly or indirectly, the creation of curriculum or content. … If we are going to compete in the world we’re in today, there’s no possible way we can do it with lowering expectations and dumbing down everything.”

Christie: “If we don’t deal with [entitlement reform], it will bankrupt our country or lead to massive tax increases—neither one that we want in this country.”

Huckabee: “If Congress wants to mess with the retirement program, why don’t we let them start by changing their retirement program and not have one, instead of talking about getting rid of Social Security and Medicare that was robbed $700 billion to pay for Obamacare.”

Bush: “I think we need to lift our spirits and have high, lofty expectations for this great country of ours. … The new normal of 2 percent that the left is saying you can’t do anything about is so dangerous for our country. There are 6 million people living in poverty today … We’ve created rules and taxes on top of every aspiration of people, and the net result is we’re not growing fast. Income is not growing.”

Walker: “This is not just bad with Iran, this is bad with ISIS. It is tied together, and once and for all, we need a leader who’s gonna stand up and do something about it.”

Paul: “I would’ve never released the sanctions before there was consistent evidence of compliance.”

Rubio: “Future generations will look back at this history of our country and call us barbarians for murdering millions of babies who we never gave the chance to live.”

Walker: “I’ve always been pro-life. I’ve got a position that’s consistent with many Americans out there, in that I believe that that is an unborn child that’s in need of protection out there, and I’ve said many times that that unborn child can be protected, and there are many other alternatives that would protect the life of the mother. That’s been consistently proven.”

Kasich: “If one of my daughters happened to be that [gay] then of course I would love them and accept them because you know what? That’s what we were taught when we have strong faith. … We need to give everybody a chance, treat everybody with respect, and let them share in this great American dream that we have.”

Paul: “I don’t want my marriage or my guns registered in Washington. If people have an opinion, it’s a religious opinion that is heartly felt, obviously they should be allowed to practice that, and no government should be allowed to interfere with that. … When the government tries to invade the church to enforce its own opinion on marriage, that’s when it’s time to resist.”

The Obama Administrations propaganda is not just false, but it is absurd, Obama's publicist Eric Zuesse remarks, adding that it obviously...