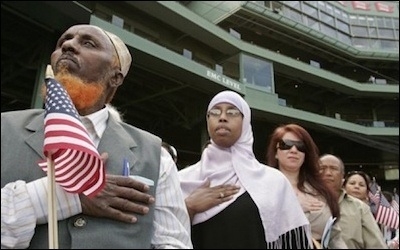 Immigrants recite the old Oath of Allegiance during a naturalization ceremony at Boston’s Fenway Park in 2008.

The Obama administration recently made changes to the Oath of Allegiance to the United States in a manner very conducive to Sharia, or Islamic law.

On July 21, the U.S. Citizenship and Immigration Services (USCIS)announced some “modifications” to the Oath of Allegiance that immigrants must take before becoming naturalized. The original oath required incoming citizens to declare that they will “bear arms on behalf of the United States” and “perform noncombatant service in the Armed Forces of the United States” when required by the law. Now the USCIS says that “a candidate [to U.S. citizenship] may be eligible to exclude these two clauses based on religious training and belief or a conscientious objection.”

The new changes further add that new candidates “may be eligible for [additional?] modifications based on religious training and belief, or conscientious objection arising from a deeply held moral or ethical code.”

These changes serve incoming Islamic supremacists especially well. For, while Islamic law allows Muslims to feign loyalty to non-Muslim “infidel” authorities, it bans Muslims from living up to the pretense by actually fighting or killing fellow Muslims on behalf of a non-Muslim entity, such as the United States.

The perfectly fitting story of Nidal Hasan—the U.S. Army major and observant Muslim who prayed daily but then turned murderer—comes to mind and is illustrative. A pious Muslim, Hasan seemed a “regular American,” even if he was leading a double life—American Army major and psychiatrist by day, financial supporter of jihadi groups and associate of terrorists by night.

However, when time came for this American soldier to “bear arms on behalf of the United States”—to quote the original Oath of Allegiance—against fellow Muslims, things got ugly: he went on a shooting spree in Fort Hood, killing thirteen Americans, including one pregnant woman in 2009.

Much of Hasan’s behavior is grounded in the Islamic doctrine of Loyalty and Enmity. According to this essential teaching, Muslims must always be loyal to Islam and fellow Muslims while having enmity for all non-Islamic things and persons. 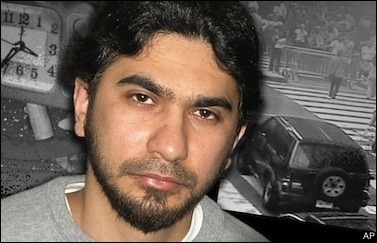 Asked by the judge about his oath upon being sentenced for the attempted May 2010 Times Square car bombing, naturalized U.S. citizen Faisal Shahzad replied, “I sweared [sic], but I didn’t mean it.”

However, whenever Muslims find themselves under the authority of non-Islamic institutions and persons, they are permitted to feign loyalty—even to the point of cursing Islam and pretending to have abandoned it—with one caveat: Muslims must never take up arms on behalf of “infidels” against fellow Muslims. In other words, their loyalty to non-Muslims must be skin deep.

Most germane is Koran 3:28: “Let believers not take for friends and allies infidels rather than believers: and whoever does this shall have no relationship left with Allah—unless you but guard yourselves against them, taking precautions.”

The words translated here as “guard” and “precaution” are derived from the Arabic word taqu, from the trilateral root w-q-y—the same root that gives us the word taqiyya, the Islamic doctrine that permits Muslims to deceive non-Muslims whenever under their authority.

Ibn Kathir (d. 1373), author of one of the most authoritative commentaries on the Koran, explains taqiyya in the context of verse 3:28 as follows: “Whoever at any time or place fears … evil [from non-Muslims] may protect himself through outward show.” As proof of this, he quotes Muhammad’s close companion Abu Darda, who said, “Let us grin in the face of some people while our hearts curse them.”[1]

If you [Muslims] are under their [non-Muslims’] authority, fearing for yourselves, behave loyally to them with your tongue while harboring inner animosity for them … [know that] God has forbidden believers from being friendly or on intimate terms with the infidels rather than other believers—except when infidels are above them [in authority]. Should that be the case, let them act friendly towards them while preserving their religion.[2]

And therein lies the limit of taqiyya: when the deceit, the charade begins to endanger the lives of fellow Muslims—who, as we have seen, deserve first loyalty—it is forbidden. As al-Qaeda leader Ayman al-Zawahiri puts it in his treatise on Loyalty and Enmity, Muslims may pretend to be friendly and loyal to non-Muslims, so long as they do “not undertake any initiative to support them [non-Muslims], commit sin, or enable [them] through any deed or killing or fighting against Muslims” (The Al Qaeda Reader, p. 75).

Thus the idea that Nidal Hasan might be deployed to a Muslim country (Iraq or Afghanistan) was his “worst nightmare.” When he realized that he was about to be deployed, he became “very upset and angry.” The thought that he might injure or kill Muslims “weighed heavily on him.” He also counseled a fellow Muslim not to join the U.S. Army, since “Muslims shouldn’t kill Muslims.”

Hasan is not the only Muslim to expose his disloyalty when pushed into fighting fellow Muslims on behalf of the United States.

In 2010, Naser Abdo, another Muslim soldier who joined the U.S. Army, demanded to be discharged on the claim that he was a “conscientious objector whose devotion to Islam has suffered since he took an oath to defend the United States against all enemies.” The Army agreed, but while processing him, officials found child pornography on his government-issued computer and recommended that he be court-martialed. Abdo went AWOL and later tried to carry out a terrorist attack on a restaurant with the use of weapons of mass destruction.

And in April 2005, Hasan Akbar, another Muslim serving in the U.S. Army, was convicted of murder for killing two American soldiers and wounding fourteen in a grenade attack: “He launched the attack because he was concerned U.S. troops would kill fellow Muslims in Iraq.”

In short, the first loyalty of any “American Muslim” who follows the Koran is to fellow Muslims, regardless of their nationality. It is not to American “infidels,” even if they be their longtime neighbors whom they daily smile to (see here for examples). Hence why American Muslim Tarik Shah, who was arrested for terrorist-related charges, once boasted: “I could be joking and smiling [with non-Muslims] and then cutting their throats in the next second”—reminiscent of the aforementioned quote by Muhammad’s companion.

Now, in direct compliance with Islamic law, the Obama administration has made it so that no Muslim immigrating to America need ever worry about having to defend her—including against fellow Muslims or jihadis.

The list of nations around the globe that have collapsing economies just continues to grow.  In recent weeks I have...