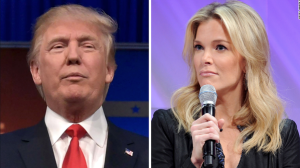 In my humble view, the Donald was spot on with his rants about criminals running the nation of Mexico and the parasites that that nation sends north as invading aliens for American taxpayers to care for!

The REAL moron when it comes to illegal aliens is the entire Democrat Party, and RINO Jeb Bush who poses as a Republican while harboring many of the inanities common to progressive “thinkers” like Barack Obama, Nancy Pelosi, Jerry Brown and other moon bats too goofy to mention.

When it comes to Trump’s tirade against Hispanic parasites and their Democrat enablers, The Donald could not be more correct! By focusing the nation’s attention on the illegal alien morass, Trump deserves a gold metal, a in likeness of himself on the front porch of the White House, and yes, perhaps a serious shot at the presidency for delving in truth, a rare adventure for any politician of any persuasion to pursue in the modern-day blood sport of presidential politics!

But as strongly as I support The Donald, his “bloody” dispute with the lovely, intelligent, and very conservative Megyn Kelly of Fox News goes beyond the pale. After all, it’s one thing to lambaste 140 million brain-dead Mexicans who richly deserve to be put in their proper places, but it’s quite another thing to take on the Queen and goddess of conservative television hosts, the unflappable, and incomparable, Megyn Kelly, and the one woman who may have the grit, guts, beauty, and brains to save America from the slippery slope that Barack Obama has pushed us down!

Although the media appears to have gone way overboard by interpreting Trump’s remarks as referring to Kelly’s menstrual cycle, the fact is that Trump erred in pouncing of Kelly so hard.

The best solution would be for Trump to take a deep breath, issue a quasi-apology, and move on!

But can he bring himself to do that?

Do You Believe in Climate Change?

By Dr. Klaus L.E. Kaiser That’s what a colleague from former times asked recently. You had to choose between YES...