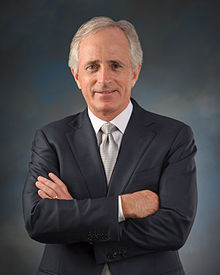 As the Framers knew, we are unlikely to outgrow human nature. So what happens when we decide we’ve outgrown a Constitution designed to protect us from human nature’s foibles?

The question arises, yet again, thanks to Senator Bob Corker. The Tennessee Republican, chairman of the Foreign Relations Committee, is author — along with Robert Menendez (D., N.J.) and Lindsey Graham (R., S.C.) — of a ballyhooed bipartisan bill that is being touted as the derailment of President Obama’s plan to trample congressional prerogatives en route to a calamitous “deal” that will facilitate jihadist Iran’s nuclear-weapons ambitions. (I use scare-quotes because the so-called deal is still a work in regress.)

So guess who now supports this stalwart congressional resistance to our imperial president? Why none other than . . . yes . . . Barack Obama!

You think maybe, just maybe, the Corker bill isn’t quite what it’s cracked up to be?

You’d be right. When you read the legislation, it becomes apparent that Senator Corker is simply channeling his inner Mitch McConnell.

Back in 2011, the Senate’s then-minority leader was flummoxed by the national debt. No, not by its enormous size. Afraid of being lambasted by the media for slowing the gravy train, he wanted to help Obama raise the debt by many additional trillions of dollars; but equally fearing the wrath of those who’d elected him precisely to slow the gravy train, he wanted to appear as a staunch opponent of such profligacy.

Senator McConnell’s problem was that meddlesome Constitution. On the theory that government borrowing and spending are best controlled by the elected officials most directly accountable to the taxpayers who foot the bill, the Constitution gives Congress, not the president, ultimate power over the debt.

This is inconsistent, of course, with a scheme to impose more crushing debt on the country without being held accountable for it. Consequently, the Constitution was thrown overboard.

McConnell and other GOP leaders hatched a plan under which Obama would appear to raise the debt unilaterally. Congress could then respond with a “resolution of disapproval.” As McConnell knew, either Democrats would defeat the resolution or Obama would veto it. That was $4 trillion ago. McConnell’s chicanery gave big-spending Republicans a windfall: They succeeded in extending our tapped-out country’s credit line but still managed to vote against the extension — i.e., they could tell the voters back home that they opposed something that actually could not have happened without their support.

American taxpayers did not fare quite as well. We are now on the hook for $18 trillion, soon to be several trillion more. If, as is inevitable, interest rates begin to approach modest historical norms, the government’s budget will be consumed by debt service. Our nation, having taken on lavish obligations of social welfare and global defense, will face a crisis that is at least transformative, if not existential.

A nuclear Iran would be a threat that is similarly transformative. To know that, we need only listen to the White House tut-tutting about how “unrealistic” it would be to expect the mullahs to renounce their support for terrorism in exchange for sanctions relief. In Washington, you see, insisting that Iran act like a normal country is nutter stuff, but trusting Iran to enrich uranium only for peaceful purposes is totally logical.

So Beltway Republicans are ready to put up a fight, right? About as much of a fight, it seems, as they were ready to make against mounting debt.

Cravenly elevating their own political interest over the national interest, many on the GOP side of the political class calculate that it is more important to avoid blame for frustrating Obama — this time, on his delusional Iran deal — than to succeed in actually frustrating Obama. But alas, that annoying Constitution is again an obstacle to shirking accountability. It does not empower the president to make binding agreements with foreign countries all on his own — on the theory that the American people should not take on enforceable international obligations or see their sovereignty compromised absent approval by the elected representatives most directly accountable to them.

Thus, the Constitution mandates that no international agreement can be binding unless it achieves either of two forms of congressional endorsement: a) super-majority approval by two-thirds of the Senate (i.e., 67 aye votes), or b) enactment through the normal legislative process, meaning passage by both chambers under their burdensome rules, then signature by the president.

The Corker bill is a ploy to circumvent this constitutional roadblock. That is why our post-sovereign, post-constitutional president has warmed to it.

Because it would require the president to submit any Iran deal to Congress, it is drawing plaudits for toughness. But like McConnell’s debt legerdemain, it’s a con job. Once the deal is submitted, Congress would have 60 days (or perhaps as few as 30 days) to act. If within that period both houses of Congress failed to enact a resolution of disapproval, the agreement would be deemed legally binding — meaning that the sanctions the Iranian regime is chafing under would be lifted.

As Corker, other Republican leaders, and the president well know, passage of a resolution of disapproval — even if assured in the House with its commanding Republican majority — could be blocked by the familiar, lockstep parliamentary maneuvering of just 40 Senate Democrats. More significantly, even if enacted in the Senate, the resolution would be vetoed by Obama. As with the resolutions of disapproval on debt increases, it is nearly inconceivable that Obama’s veto would be overridden.

To summarize, the Constitution puts the onus on the president to find 67 Senate votes to approve an international agreement, making it virtually impossible to ratify an ill-advised deal. The Corker bill puts the onus on Congress to muster 67 votes to block an agreement.

Under the Constitution, Obama’s Iran deal would not have a prayer. Under the Corker bill, it would sail through. And once again, it would be Republicans first ensuring that self-destruction is imposed on us, then striking the pose of dogged opponents by casting futile nay votes.

This is not how our system works. Congress is supposed to make the laws we live under. It is the first branch of government, not a rubber-stamping Supreme Soviet.

We seem to have forgotten that the point of the Constitution is not to accomplish great things; it is to prevent government from doing overbearing or destructive things. The achievement of great things was left to the genius and ambition of free people confronting challenges without stifling constraints.

The Constitution’s constraints can indeed be stifling. Quite intentionally so: They are there to prevent legacy-hunting ideologues and feckless fixers from rolling the dice with our lives.

That a lawless president would undertake to eviscerate these constraints is to be expected. But is he really much worse than an entrenched political class that anxiously forfeits its powers to stop him?

— Andrew C. McCarthy is a policy fellow at the National Review Institute. His latest book is Faithless Execution: Building the Political Case for Obama’s Impeachment.

From Bennet to Wyden: the Democrats Who’ll Decide the Iran Deal’s Fate

The Hill reports that support for the Iran nuclear agreement is building among Democrats, with 18 Democratic senators now publicly...