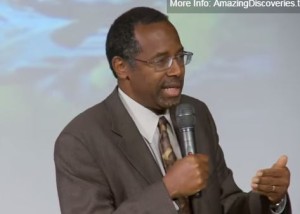 Well, maybe I’m not objective when it comes to Planned Parenthood. But you know, I know who Margaret Sanger is, and I know that she believed in eugenics, and that she was not particularly enamored with black people… And one of the reasons that you find most of their clinics in black neighborhoods is so that you can find way to control that population. And I think people should go back and read about Margaret Sanger, who founded this place — a woman who Hillary Clinton by the say says she admires. Look and see what many people in Nazi Germany thought about her.

Carson spoke the truth. Margaret Sanger was part of the American Eugenics Society, and this society was admired and praised by Adolf Hitler himself. As author Stefan Kuhlwrites:

In 1934 one of Hitler’s staff members wrote to Leon Whitney of the American Eugenics Society and asked in the name of the Fuhrer for a copy of Whitney’s recently published book, The Case for Sterilization. Whitney complied immediately, and shortly thereafter received a personal letter of thanks from Adolf Hitler. In his unpublished autobiography, Whitney reported a conversation he had with Madison Grant about the letter from the Fuhrer. Because he thought Grant might be interested in Hitler’s letter he showed it to him during their next meeting. Grant only smiled, reached for a folder on his desk, and gave Whitney a letter from Hitler to read. In this, Hitler thanked Grant for writing The Passing of the Great Race and said that “the book was his Bible.” Whitney concluded that, following Hitler’s actions, one could believe it. (unpublished autobiography of Leon F. Whitney, written in 1971, Whitney Papers, APS, 204-5)

Margaret Sanger appointed Lothrop Stoddard as a board member of the Birth Control League, and Stoddard loved the Nazis and all of the killings they were doing:

When the Nazis came to power, argued Stoddard, they started to increase “both the size and the quality of the population.” They coupled initiatives designed to encourage “sound” citizens to reproduce with a “drastic curb of the defective elements.” Stoddard personally witnessed how the Nazis were “weeding out the worst strains in the Germanic stock in a scientific and truly humanitarian way.”

Ben Carson also made the astute observation that if “black lives” really mattered, then we should be focusing on the huge murder rate amongst blacks themselves:

Of course black lives matter… But what I feel instead of people pointing fingers at each other and just creating strife, what we need to be talking about is how do we solve problems in the black community. Of murder, essentially.

Of course, you will have left wing black activists that will hate Mr. Carson for expressing these wise sentiments. We must ask ourselves: why do so many of the blacks hate those who desire to help them? Ben Carson lived in the slums, and he rose above it, not allowing it to shape or mold him, but instead pursuing success within his fullest capacity. He is a living evidence that blacks most definitely are given the freedom and are enabled to be successful in American society. But instead we do not hear of the success of Carson’s, and of other blacks, rather we continuously hear about blacks are are oppressed by whites; how prisons are built just for blacks; how slavery has never ended.

Yes, black slavery has never ended; its still here, in America. The difference is that many of the blacks have chosen willful slavery. The worst form of slavery is willful slavery. Instead of following the examples of men like Dr. Carson, they have chosen to praise blacks whose success was done solely from low class actions. Ben Carson is an accomplished brain surgeon. Most blacks would never want to follow his example. Instead they want to model themselves after pimps (pimp is now a compliment), hookers and criminals. Rappers make millions from creating heaps of feces called “rap music.”
These are the ones who are praised, while it is the righteous who are spat on.

Yet they still speak of slavery as though we are still in the past. A new slavery has arisen, and it has enslaved most of us. It is the slavery of the mind. Look around you and you will see everyone in the chains of trends; the fetters of industrially made popularities. Being a slut is now esteemed as being “free,” and as “women’s liberation,” while modesty, fidelity and chastity, are seen as “caveman” ideas. Those who esteem the pure roles of womanhood, are accused of not being of the American ideal, and told to leave America and go to Pakistan, or are suspected of being a Muslims (this has happened to me quite too many times). Those who are sons of God, and strive to be free from the flesh, are deemed as slaves; but those who are slaves to evil, who sell their bodies just for the stroke of the evil, are said to be free. Today the slave is esteemed as free, and the free enslaved. We cannot help but say with the prophet:

The wicked prowl on every side,
When vileness is exalted among the sons of men. (Psalm 12:8)

Those who live the life of the harlot, are truly slaves; slaves to the industrial system, slaves to fads and popular opinion. It is through God that we are free, it is through God that our minds are liberated. Freedom is a state of mind. You could live in a concentration camp and be more free than anyone living in America, if your mind is free. As the Scripture says, “He who is slow to anger is better than the mighty, and he who rules his spirit than he who takes a city.” (Proverbs 16:32)

This is the stillness of the mind that the holy fathers wrote of. One could be in a war, and if he has stillness, his faith will be unshakable. “Even the most gruesome wars can rage,” wrote St. Paulinus of Nola, “but the peace of freedom must attend our minds.” Awareness of God is the very essence of the Christian life. When we look at Christian icons, paintings, architecture, or when we listen to the ancient chants of the saints, we are in awareness of God — this is the purpose of such beautiful things.

If one could maintain awareness of God for his entire life, then he would never fear anything. This is stillness. It is the stillness of faith, stillness of the heart, of the mind, and it never wavers because it is like a house on the rock. “Be still, and know that I am God; I will be exalted among the nations, I will be exalted in the earth!” (Psalm 46:10) Awareness can be disturbed by the simple distractions of daily life, or the most tragic of events (this is part of the human struggle), but if we can fight that urge to turn away from knowing that God is amongst us, if we can uproot it, kill it, burn it in the fires of zeal, then we will continue awareness on God and present ourselves as living sacrifices before Heaven. One of the most beautiful lines that I have read is from St. Romuald:

Sit in your cell as in paradise. Put the whole world behind you and forget it. Watch your thoughts like a good fisherman watching for fish. The path you must follow is in the Psalms—never leave it. … And if your mind wanders as you read, do not give up; hurry back and apply your mind to the words once more.

Realize above all that you are in God’s presence, and stand there with the attitude of one who stands before the emperor. Empty yourself completely and sit waiting, content with the grace of God, like the chick who tastes nothing and eats nothing but what his mother brings him.

The wicked dictate to the society what is popular and what is acceptable, but all we must do is laugh at them. For by becoming in union with God, we are in union with Truth, “and the truth shall make you free.” (John 8:32)

We have to prepare our minds and intellect for this spiritual war that we are in. This is why I made a 2-disk DVD series on teaching the warring spirit of the Christian Faith.

For too long Christianity has been watered down in our modern day as a pacifist faith with no inclination of fighting evil. But is the Church here to be weak and useless? This shocking and riveting two disk DVD set lecture series, passionately shows how Christianity is not here to be feeble, but for warfare, to be militant against tyranny and the forces of darkness.

You will not be dissatisfied after watching this lecture, and Bible studies will forevermore never be the same again.

In Case You Missed It:  Putin places blame for Nordstream sabotage squarely on Biden after he threatened to shut it down over Ukraine invasion
Posted in Freedoms and tagged Abortion, blacks, Crime.

Hillary finally hands over her server—after it's been professionally wiped clean. After years of holding herself above the law, telling...