The  US Embassy in Havana opened in 1953 and designed by U.S. firm Harrison & Abramovitz.

But the U.S. Embassy didn’t close, exactly, and it didn’t lie vacant.

On Jan. 7, 1961, U.S. chargé d’affaires Daniel Braddock handed the keys over to the Swiss embassy in Havana, and the Swiss held on to the building and the ornate 35,000-square-foot U.S. ambassador’s residence until America returned in 1977.

In the 16 years that the Swiss were America’s sole diplomatic stand-in in Cuba, Castro threatened to nationalize and take over the embassy building at least twice. In 1977 Jimmy Carter negotiated a slight thawing of relations and opened the “U.S. Interests Section” in Havana (while Cuba opened a “Cuban Interests Section” in Washington) , although the U.S. had no diplomatic presence in Cuba.

The Cubans had originally approached the Swiss informally in late 1963 to feel them out on the possibility of nationalizing the former U.S. embassy or at least leasing it, The Swiss said no way,
“referring to the absolute character of Article 45 of the Vienna Convention on Diplomatic Relations of 1961, strictly prohibiting such a step by the host government. He even stated that this would potentially be considered by Swiss authorities the most unfriendly and severest act against Swiss foreign policy since the existence of the Confederation.”

But after the U.S. confiscated four Cuban fishing vessels off Key West on Feb. 2, 1964, Havana pressed the issue. Citing historian W.S. Smith, Fischer recounts that Cuban officials “appeared at the entrance of the former U.S. Embassy in Havana, determined to take possession of the building for the purposes of the Cuban Ministry of Fishing.”

The Swiss had about 50 people working in the U.S. Embassy, with much of their energies dedicated to processing the requests of Cubans who wanted to emigrate to the U.S. in a massive airlift.

A U.S.-based Cuban exile group called Alpha 66 had sunk two Cuban fishing boats and was holding their crews prisoner on a Caribbean island, prompting tens of thousands of Cubans to surround the U.S.

Embassy building, trapping the Swiss embassy workers inside for three tense days. That incident ended peacefully when Alpha 66 released its prisoners, but the episode “triggered a renewal of the discussion on the ownership structure of the former U.S. Embassy building,”.

Cuban authorities considered American claims on the premises as forfeited, and had only tacitly agreed to the use of the building by the Swiss protecting power in the past years. The most insistent démarches by the Swiss embassy referring to the rules of the Vienna Conventions on Diplomatic Relations were necessary to prevent the Cubans from another attempt to definitely occupy and [nationalize] the building in the circumstances.

Even when the U.S. flag is once again flying over the American Embassy in Havana on Friday, relations between Cuba and the U.S. won’t exactly be normal. Old wounds heal slowly, and the Republican-led Congress doesn’t may not confirm the ambassador to Havana or end the decades-old trade embargo. But amid all the muted festivities of the historic occasion, it’s worth taking a moment to thank the Swiss for making sure America still has an embassy to fly the Stars and Stripes above.

In the absence of diplomatic or consular relations of the United States of America with the Islamic Republic of Iran, the Swiss government also acts for US interests in Iran through its Embassy in Tehran, serves as the Protecting Power of the USA in Iran since 21 May 1980. 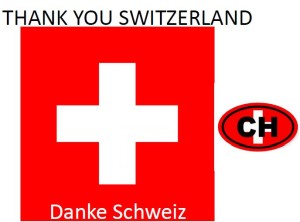 In Case You Missed It:  Thanksgiving: A Politically Incorrect Guide
Posted in Freedoms and tagged Cuba, Switzerland, United Socialist States of America.

Lawyers for a county clerk in Kentucky who refuses to issue marriage licenses to same-sex couples appealed a federal judge’s order...