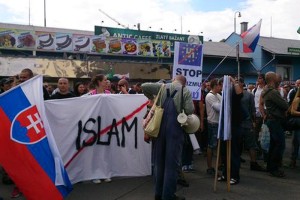 The Slovakian government will now be accepting Christians who are persecuted by Muslims. The UN is telling Slovakia that they must as well take in Muslims, but Slovakia is firmly responding: ‘We will only take Christians!’

Interior ministry spokesman Ivan Metik said that Muslims would not feel at home in Slovakia because there are no mosques in the nation. He said:

We could take 800 Muslims but we don’t have any mosques in Slovakia so how can Muslims be integrated if they are not going to like it here?

Resettlement is greatly needed for many refugees who are at extreme risk among the world’s most vulnerable groups. …We encourage governments to take an inclusive approach while considering refugees for resettlement and should not base their selection on discrimination.

But Slovakia is still sticking with what it wants and that is, persecuted Christians only.

In Case You Missed It:  Why globalists desperately need control of Arizona before they unleash the next staged pandemic
Posted in Freedoms and tagged Christian Genocide, Christians Middle East, Eastern Europe, Immigration, Muslims, Slovakia.

Joel Gilbert’s There’s No Place Like Utopia, a film that gets to the heart of the progressive/communist project for America...