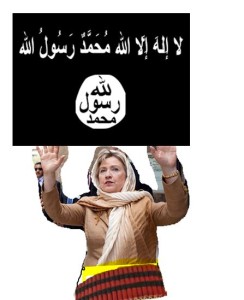 Like all other major candidates in the 2016 presidential race, Hillary Rodham Clinton promises to continue the “war on terrorism.” Despite her rhetoric, Rodham Clinton has undisputedly worked directly for the benefit of terrorism around the world. At least two groups that were legally designated as terrorist organizations by the US State Department have directly benefited from her support.

Mujahadeen E-Khalq (MEK), or the People’s Holy Warriors, is a strange sect of “Islamic Marxists” that was founded in Iran. The group murdered many Iranians during the 1970s as well as a few US citizens. When Iran had its Islamic revolution in 1979, the MEK was at first hopeful that it could become the new ruling party. However, as it began to lose out during the triumph of Khomeini, MEK responded with a campaign of violent terrorism against Iranian government officials. Over 70 members of the Iranian parliament were killed when MEK bombed a meeting of the Islamic Republican Party.

MEK eventually made friends with Iraqi dictator Saddam Hussein, who directed MEK members to go on a killing spree throughout the Iranian countryside during the Iraq-Iran war. Divisions of MEK fighters calling themselves the “Iranian National Liberation Army” destroyed the village of Eslamabad-e Gharb, slaughtering a large number of civilians in the process.

After the Iraq-Iran war, MEK relocated to Iraq where Saddam Hussein utilized the MEK fighters to exterminate Kurds. The total number of innocent people killed by MEK over the years probably numbers in the tens of thousands.

Internally, the organization of MEK terrorists functions as a bizarre cult. Massoud Rajavi, the group’s founder, is worshipped like some kind of prophet, and has been in hiding since 2004. His spouse, Maryam Rajavi, has declared herself to be the president of Iran, and gives many proclamations from exile in France. Human Rights Watch reports that within its various camps, MEK routinely tortures prisoners and subjects its followers to the death penalty if they violate its strict regulations.

In September of 2012, then-Secretary of State Hillary Rodham Clinton officially removed MEK from the list of designated terrorist organizations. Because of this designation by Rodham Clinton, it is now legal for anyone in the United States to provide material support to the MEK terrorists. MEK has continued its shady relationship with Rudy Giuliani, Tom Ridge, and a number of other politicians.

Clinton justified her decision to legalize a group of mass murderers by saying that MEK had “denounced violence.” Around the very time she said this, MEK leaders assassinated peaceful scientists in Iran in collaboration with Israel. MEK still calls for the violent overthrow of the Iranian government, and has even made statements supporting ISIS. MEK is known to have a number of agents, currently in Iran, who have attempted to assassinate government officials and done many other things to destabilize the country.

A Soft Spot for Boko Haram

Boko Haram was finally declared to be a terrorist organization in 2013 after the group had been killing people for over 11 years. The US media suddenly became concerned about Boko Haram after a bizarre social media campaign called “Bring Back Our Girls.” Since the “Bring Back Our Girls” media crusade, the US has escalated its military presence in Nigeria, and drones are flying over the country’s skies.

The People’s Republic of China has provided a huge amount of aid to Nigeria to fight against Boko Haram. China has provided a large amount of weapons and even donated an entire warship to the Nigerian military. Nigeria’s newly elected President, Muhammadu Buhari, has scored more victories against Boko Haram in the last few months than the US and Shell Oil-supported leader Goodluck Jonathan did in the last ten years.

Rodham Clinton’s supporters give many excuses for her apparent soft spot for Boko Haram. They say it is an “internal threat” in Nigeria, not an international threat, thus disqualifying it as a “foreign terrorist organization.” This is false, as the group is operating not only in Nigeria but also in Chad and Cameroon. Boko Haram’s source of funding is unknown, but is widely suspected to be coming from outside the country.

Rodham Clinton’s supporters also claim that her refusal to list Boko Haram was based on fears that it would justify “human rights violations” by Nigerian leaders. This is a very strange reason for not listing an organization as a “foreign terrorist organization.”

Rodham Clinton’s apparent infatuation with two organizations that were officially designated as foreign terrorists is really about oil. The MEK terrorists are seeking to violently overthrow the Islamic Republic of Iran. Iran is an oil-producing country with an anti-imperialist government. Iranian oil is nationalized, and utilized to fund an independent economy.

Boko Haram is working to destabilize Nigeria. Nigeria is getting closer to China, and has become the top oil-producing country in Africa, since the violent destruction of Libya by US/NATO bombs.

Nigeria and the Islamic Republic of Iran are both oil-exporting countries that function as competitors to the US-aligned Gulf states in the Middle East. Saudi Arabia, United Arab Emirates, Qatar, Oman, and Bahrain are all US-aligned Gulf states. Their resources are controlled by Wall Street and London-based oil corporations. The more that Iran and Nigeria can be destabilized and inhibited in their ability to export, the more profits Wall Street and its Arab vassals can make.

The Wall Street-controlled Gulf states are all absolute monarchies. Saudi Arabia beheads and tortures people routinely, as does Qatar and the United Arab Emirates. These countries are major purchasers of US weapons. Saudi Arabia now has the fourth-largest military budget of any country in the world, and its weapons are purchased exclusively from the United States.

This money was used so Rodham Clinton could go on luxury trips and enjoy other perks. The Washington Post wrote: “No presidential candidate can justify a conflict of interest of this magnitude; it is not merely the appearance of conflict but actualconflict of interest.”

Osama Bin Laden himself was very well connected within the influential circles of the Saudi regime. The 28 redacted pages of the 9/11 report contain information about the Saudi government. From federal prison, Zacarias Moussaoui, who was convicted for allegedly being a co-conspirator in the 9/11 attacks, has claimed that the Saudi royal family was involved.

In 2014, Iraqi President Nouri Al-Maliki declared to the world that ISIS was a Saudi-funded operation. He was deposed shortly afterward.

Spreading Terrorism Across the World

The US military’s overthrow of governments in Afghanistan, Iraq, and Libya — all of which Rodham Clinton supported and directly enabled — resulted in a vast expansion of terrorist organizations. Afghanistan is now a haven for terrorist groups. A key source of terrorist funding, heroin production, was once suppressed by the Taliban. Modern Afghanistan is now home to a large number of poppy fields, and is the center the global heroin trade.

Iraq, once a somewhat stable country, is now home to a number of Takfiri extremist groups like ISIS. Shia communities in Iraq have formed militias to protect themselves from a wave of Sunni terrorism. Funding for violent Sunni factions in Iraq often comes directly from Saudi Arabia. Millions of Iraqis have died in the wave of instability and terrorism that followed the US invasion.

Rodham Clinton gleefully laughed and said, “We came, we saw, he died” in reference to the gruesome murder of Libya’s President Moammar Gaddafi. Since the US/NATO overthrow of the Libyan government, that country has also become a haven for terrorism.

Violent factions among the western-supported “Libyan rebels” now chaotically battle each other for power. Libyans are being recruited and taken to Syria to fight against the Syrian government. ISIS is now present in Libya, and conditions in what was once the most prosperous African country have become so bad that Libyans are packing into ships and drowning in the Mediterranean trying to flee it.

Rodham Clinton, like all major politicians in the United States, is an agent of big money. Terrorism in the Middle East and other parts of the world is highly beneficial to the rich and powerful.

Throughout her career as a politician, Rodham Clinton has worked to the direct benefit of terrorist organizations. She is financially tied to autocratic Gulf state monarchies that support terrorism. Clinton functions on behalf of Wall Street oil corporations which benefit from spreading instability around the world, especially in areas that are starting to develop independently.

Don’t be fooled by her campaign rhetoric. Clinton’s long record in the service of terrorism speaks for itself.

In Case You Missed It:  Joe Biden: Blacks and Hispanics Are Too Stupid to Figure Out How to “Get Online”
Posted in Terrorism and tagged Clinton, Democrats, Election, ISIS, terror, Terrorism.

Why is the government in the marriage business? As I explain in “Truth Overruled: The Future of Marriage and Religious...