Alarm bells rang across world markets today as a 9 percent dive in Chinese shares and a sharp drop in the dollar and major commodities panicked investors fearing a Chinese “hard landing”. State media has called it China’s “Black Monday”

Words such as ‘bloodbath’ have been used as stock markets in London, Paris and Frankfurt have opened sharply lower after their Asian counterparts slumped to 3-year lows as a three month-long rout in Chinese equities threatened to get out of hand – the Shanghai Composite in China closed down 8.5 per cent, the worst close since 2007.

London’s FTSE 100 was down by 2.5 per cent in early trade, 3 per cent by lunchtime. The FTSEEurofirst 300 index of European stocks has also dropped, heading for its worst four weeks of trading since the period following the Lehman crisis.

Major markets in France and Germany had also opened down by more than 3 per cent. All of the Europe’s national stock measures fell more than 2.4 per cent except for Iceland.

“Regardless of what the Chinese government and People’s Bank of China might be saying and doing, they are currently learning a lesson that many have learned before them. Namely that you can only fight against market forces for so long before you end up losing…

“…The volatility index has now doubled in less than three trading days and this is a clear example that panic rather than prudence is driving traders’ thinking. The overnight session gave little encouragement to those hoping for a bounce in the markets, although the dominance of equities in oversold territory does bear out the adage that it’s always darkest before the dawn.

“How long equity markets remain this negative should help clear up how much of the downward move is due to sellers dumping shares or whether it’s down to a short-term absence of buyers.”

“Over the last six years since the 2009 lows we’ve seen some hefty short lived sell-offs interspersed within the slow rise to record highs this year, but nothing like the events of the last few days.

“These sell-offs have usually been over concerns about a variety of factors including growth slowdowns, the withdrawal of central bank stimulus, as well as political and geopolitical instability, but last week’s bloodbath and this mornings continued sell off in Asia has an altogether different feel to it, coming as it does in conjunction will a plunging oil price, with US WTI crude traded below $40 a barrel for the first time since 2008.

“With that the prospect of a return to those 2008 lows at $35 a barrel almost seems inevitable,unless something drastic changes within OPEC, or there is some sort of supply shock, which generates a pullback.

“Factor in further uncertainty in Europe as Greece gets set for another election on September 20th, as well as elections in Spain and Portugal coming up before year end as well, and we have a recipe for a big cocktail of uncertainty.

“Against that back drop it appears that we are set for further heavy losses in the short term as investors await the next moves from central bankers, though with interest rates already at record lows, there is a risk that these toolboxes we hear so much about could be getting rather depleted.

“While it appears this month’s sell-off catalyst was a fairly innocuous and not unreasonable readjustment in the trading band for the Chinese yuan, this particular Chinese butterfly also appears to have triggered a complete turnaround in sentiment and reassessment of stock market valuations across the globe, reinforced with a particularly horrible manufacturing PMI number last week…

“…As we embark on the final full week of August the prospect of further large scale volatility seems almost inevitable as investors look towards Chinese markets in particular for further clues to market direction. Chinese authorities’ 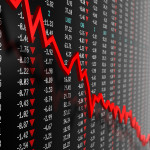 attempts to defend the 3,500 barrier in the Shanghai Composite look destined to fail with the break below the 200 day MA at the end of last week, likely to put further downward pressure on stocks.

“Against this backdrop it would take an investor with nerves of steel to contemplate dipping back into the market at this point.”

The BBC suggests that “investors might have to wait for several weeks for bargain hunters to come into the market to lift stocks.”

Bloomberg also reports on the wide-ranging effects of the Chinese economy:

“The rout that began with the devaluation of China’s currency, raising concern over a global economic slowdown, has sent the Stoxx 600 [a globally integrated index provider covering the world markets across all asset classes] into a correction, closing 13 per cent lower than the record it reached in April. Thirteen out of 18 western-European markets have fallen 10 percent or more from their high.

““Today everyone seems to be selling off, and there’s panic, there’s no rational choice anymore, no rational reaction,” according to Michael Woischneck of Lampe Asset Management GmbH, who helps oversee 6.2 billion euros ($7.1 billion). “There wont be a rebound today. The Americans will add to the European selling pressure in the afternoon, and that may drive us even lower.”

“The DAX [Germany’s blue chip stock market index], one of the biggest gainers at the start of the year, will be among the most hit due its exposure to China, Woischneck said. If it closes at the current level, it will be the first to enter a bear market among western-European gauges.”

Safe-haven government bonds and the yen and the euro rallied as widespread fears of a China-led global economic slowdown kicked in. Earlier today the single currency hit $1.1499, a six month high against the US dollar.

China’s decision to allow its main state pension fund to invest in the stock market has failed to calm matters, in China itself and beyond.

“Markets are panicking. Things are starting look like the Asian financial crisis in the late 1990s. Speculators are selling assets that seem the most vulnerable,” said Takako Masai, head of research at Shinsei Bank in Tokyo.

With serious doubts now emerging about the likelihood of a U.S. interest rate rise this year, the dollar slid against other major currencies. It was last 121.05 yen having gone as low as 120.73 in Asia, a level last seen on July 9.

The Australian dollar tanked to six-year lows and many emerging market currencies also plunged, whilst the frantic dash to safety pushed the euro to a 6-1/2-month high.

Copper, seen as a barometer of global industrial demand, tumbled 2.5 percent, with three-month copper on the London Metal Exchange hitting a six-year low of $4,920 a tonne. Nickel slid 4.6 percent to its lowest since 2009 at $9,730 a tonne.

People are predicting a possible ‘dead-cat-bounce’ next week, however most analysts seem to agree that the volatile conditions will stay with us until Christmas at the earliest. Nick Lawson and Gael Gunubu, analysts at Deutsche Bank, say it would be “strange now if the Fed kicks off their hikes in September,” adding, “even if we get a protracted bounce, the last couple of weeks have offered a vignette of what may occur if the Fed makes a policy mistake (though arguably the mistake had already been made in being too loose for too long).”

The Dow Jones index is predicted to open more than 300, possibly even as much as 400, points down. This follows Friday’s 3 per cent drop of 530 points.

Even amongst the chaos, labelled #GreatFallOfChina on Twitter, some have found cause for optimism. Reuters‘ Peter Thal Larsen says:

“…global investors appear to have lost their confidence in China’s leadership. The latest stock market decline only underscores the futility of its efforts to prop up share prices at higher levels in July.

If officials have now stopped trying to use government money to manipulate the market, the sell-off may actually be positive. Even so, blind faith in China’s ability to navigate its many economic challenges has gone for good.”

Reuters contributed to this article.

The Associated Press released a bombshell report on Wednesday that revealed that Iran will be allowed to use its own...