The liberal mainstream media peddled the delusion that the unfolding economic crash was merely a short term “correction.

Even as late as last week, news outlets like CNBC were urging viewers to invest in the stock market, ludicrously suggesting that the market was simply having a “dull year” and that this would be “good for investors”.

Even as the Dow plunged over 500 points on Friday, Bloomberg reported that the global selloff was just a “correction”. The Dow Jones suffered a further 1,000 point plunge at one point this morning, all of those Media claims are now looking completely ridiculous.

Years of bailouts and monetary expansion have created one of the most inflated and artificial economic booms in history, and now it appears that this global economic bubble is deflating. Markets across the board are melting down as we speak, and the financial crash that supposedly “fringe” analysts have been predicting since 2008, is finally upon us. Take a look at what’s going down right now.

That last one is very telling. You can always tell when the global economy is in bad shape based on the value of various commodities. It’s one of the strongest indicators for an economy, since it reveals how many real, tangible goods are being produced. Curiously, many of these commodities have been falling in value throughout the supposed recovery that we’ve been in since 2009.

Chinese real estate bubble has burst, leaving home-owners in the world’s most populous nation upside down and shopping malls empty. Even worse, Chinese authorities will try to devalue their way out of this debt morass, just as the US has been trying to do with a lower dollar.

This is very bad news for the global economy. 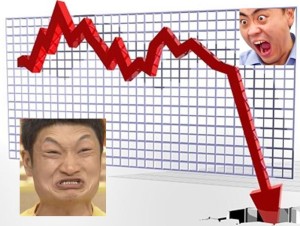 The only commodity that is doing well right now is gold, which has reached a six week high, and just had its best week since last January. Given the safe haven status that gold holds, it’s clear now that confidence in the US dollar and the global economy, is slowly slipping.

With all of this information at hand, it would be hard to deny that we may be finally witnessing the same kind of crash that we endured in 2008. Anyone who thought that we’ve been in a genuine recovery for the past 6 years, was foolish. But anyone who thinks that global markets will simply bounce back from what has occurred over the past few weeks, is downright crazy.

“The DOW is going to crash to a degree we haven’t seen since the Great Depression” said world-renowned economist Harry Dent.

Alarm bells rang across world markets today as a 9 percent dive in Chinese shares and a sharp drop in...