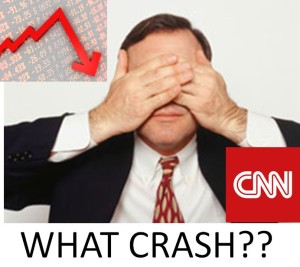 On Wednesday we witnessed the third largest single day point gain for the Dow Jones Industrial Average ever.  That sounds like great news until you realize that the two largest were in October 2008 – right in the middle of the last financial crisis.  This is a perfect example of what I wrote about yesterday.  Every time the market crashes, there are huge up days, huge down days and giant waves of market momentum.  Even though the Dow was up 619 points on Wednesday, overall we are still down more than 2,000 points from the peak of the market.  During the weeks and months to come, we are going to see many more wild market swings, but the overall direction of the market will be down.

Sadly, the mainstream media is still peddling the lie that everything is going to be just fine.  So millions upon and millions of Americans are just going to sit there while their investments get wiped out.  In the six trading days leading up to Wednesday, Americans lost a staggering 2.1 trillion dollars as stocks plunged, and the truth is that this nightmare is only just beginning.

Early on Wednesday morning, CNN published an article entitled “Why U.S. stocks aren’t headed for a crash“.  I had to laugh when I saw that headline.  If CNN is going to make this kind of a claim, they better have something very solid to base it on.  But instead, these are the five reasons we were given for why the stock market is not going to collapse…

This is exactly what all of the “experts” told us back in 2007 and 2008 too.  In America today, the homeownership rate is at a 48 year low, 46 million Americans go to food banks, and economic growth has slowed to a standstill (and that is if you actually buy the highly manipulated official numbers).  The truth, of course, is that things continue to progressively get worse as our long-term economic decline continues to unfold.  For much more on this, please see my previous article entitled “12 Ways The Economy Is Already In Worse Shape Than It Was During The Depths Of The Last Recession“.

Really? Go to just about any major retail store and start reading labels.  You will likely find far more things that were “made in China” than you will American-made products.  The global economy is more interconnected than ever before, and the Chinese stock market is the second largest on the entire planet.  Of course what is happening in China is going to affect us.

3. “American businesses are doing pretty well (outside of energy).”

Actually, they were doing pretty well for a while, but now things are turning.  Many large corporations are reporting declining orders, declining revenues and declining profits.  Unsold inventories are beginning to pile up and the pace of layoffs is starting to increase.  All of the things that we would expect to see just prior to another recession are happening.

This is laughable.  Ultimately, it isn’t going to matter much at all whether the Federal Reserve barely raises rates or not.  The era of “central bank omnipotence” is at an end.  Just look at what is happening over in Europe.  All of the quantitative easing that the ECB has been doing has not kept their markets from crashing in recent days.  Those that believe that the Federal Reserve can somehow miraculously keep the stock market from crashing this time around are going to end up deeply, deeply disappointed.

But let’s hope that CNN is actually right – at least in the short-term.

Let’s hope that markets settle down and that things stabilize for at least a few weeks.

In order for that to happen, markets need to become a lot less volatile than they are right now.  The rollercoaster ride that we have been on in recent days has been extraordinary…

The Dow traveled another 1,600 points during Tuesday’s trading session, adding to the 4,900 points the index traveled in down and up moves on Monday.

If you are rooting for a return of the bull market, you should be hoping for nice, boring trading days where the Dow goes up by about 100 points or so.  Wild swings like we have seen on Friday, Monday, Tuesday and Wednesday are very strong indicators that we have entered a bear market.

What we have been witnessing over the past week is almost unprecedented.  Just check out this piece of analysis from Bloomberg…

By one metric, investors would have to go back 75 years to find the last time the S&P 500’s losses were this abrupt.

Bespoke Investment Group observed that the S&P 500 has closed more than four standard deviations below its 50-day moving average for the third consecutive session. That’s only the second time this has happened in the history of the index.

Of course after such a dramatic plunge it was inevitable that we were going to have a “bounce back day” where there was lots of panic buying.  Initially it looked like it would be Tuesday, but it turned out to be Wednesday instead.

But if you think that the big gain on Wednesday somehow means that the crisis is “over”, you are going to be sorely mistaken.

Personally, I am hoping that we at least see a bit of a pause in the action, but there is absolutely no guarantee that we will even get that.

As the markets have been flying around, more and more Americans are becoming curious about the potential for a full-blown stock market crash.  The following comes from Business Insider…

This one’s pretty easy: according to Google search trends, more Americans are searching for “stock market crash” now that at any point since the last crash.

Right now, search traffic for the term “stock market crash” is hitting about 70% of the most volume this term has ever gotten through Google search.

And so while this data doesn’t convey absolute search volume for the term, we do know that Americans appear to be looking for information about a stock market crash at the highest level in about 7 years.

In addition, Americans are also becoming more pessimistic about the overall economy.  According to Gallup, the level of confidence that Americans have about the future performance of the U.S. economy is the lowest that it has been in about a year.

And remember – it isn’t just U.S. markets that are starting to go crazy.  All over the planet stocks are crashing and recessions are starting.  In fact, I can’t remember a time when there has been this much economic chaos erupting all over the world all at once.

So can the U.S. resist the overall trend and pull out of this market crash?

In Case You Missed It:  Get Ready for the Economic Collapse
Posted in Financial and tagged CNN, Economy, Recession, Wall Street.