According to recent reports, a group of nearly 200 retired generals and admirals just submitted a letter to Congress pleading with them to reject President Barack Obama’s nuclear deal with the Islamic Republic of Iran. 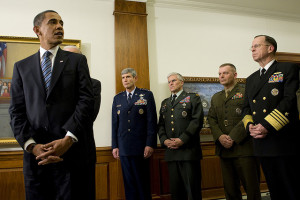 “The agreement will enable Iran to become far more dangerous, render the Mideast still more unstable, and introduce new threats to American interests as well as our allies,” the letter concluded.

It was written in response to 36 retired generals who wrote their own letter of support to Congress.

“What I don’t like about this is the number one leading radical Islamic group in the world is the Iranians,” Thomas McInerney told reporters. “They are purveyors of radical Islam throughout the region and throughout the world. And we are going to enable them to get nuclear weapons. Why would we do that?”

McInerney’s question is one many Americans have, and it remains unanswered to this day.

What do you think? Do you applaud these retired generals?

(Conservativepapers.com) Struggling to cope with thousands of refugees and migrants passing through the country, Macedonia's government declares a state of...