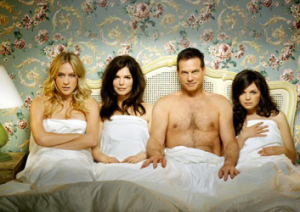 More Mormons are now referring to the Supreme Court’s decision on homosexual marriage. Here is the report:

Kody Brown and his four wives argue in court documents that their reality TV show “Sister Wives” shows polygamous marriages can be as healthy as monogamous ones.

“The Browns were investigated and no crimes or harm was found in their plural family,” attorney Jonathan Turley wrote in court documents filed Wednesday in front of the 10th Circuit Court of Appeals. He has said the family is prepared to take the legal fight to the U.S. Supreme Court if necessary.

The Browns are defending a legal victory they won in 2013, when a federal judge struck down key parts of Utah’s law banning polygamy. Advocacy groups for polygamy and individual liberties called the ruling a significant decision that removed the threat of arrest for the state’s plural families.

Unlike same-sex marriage advocates, the Browns are not seeking full legal recognition of polygamous marriages. That portion of Utah’s bigamy law prohibiting multiple marriages license was left in place by U.S. District Judge Clark Waddoups when he decided that a provision of the state law forbidding cohabitation violated the family’s freedom of religion.

In most polygamous families, the man is legally married to one woman but only “spiritually married” to the others.

According to recent reports, a group of nearly 200 retired generals and admirals just submitted a letter to Congress pleading...