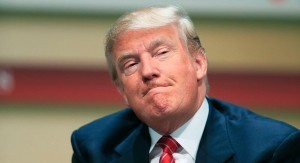 Jeb Bush, like his brother W., boasts of his ability to speak Spanish, as if doing so were a great cultural achievement indicating international sophistication or language diversity.

Actually, speaking Spanish in America is generally a sign that one mops floors, washes cars, waits tables, picks fruit, or is otherwise engaged in menial, low-paying labor left to the lower classes.

Jeb Bush also does it to please his Mexican spouse and family, and court illegal aliens.

Whatever Bush’s motivation, Donald Trump is rightfully outraged by the use of a foreign language by an American candidate for the US presidency!

Trump had harsh words for Sen. Marco Rubio (R-FL)80%
in this interview as well and lit into the donor class, all while saying that the “silent majority” in America is waking up and fighting to take back the country from the political class.

“I like Jeb,” Trump said. “He’s a nice man. But he should really set the example by speaking English while in the United States.”

“El hombre no es conservador,” Bush said in Spanish of Trump in Miami, according to the Tampa Bay Times. That means, according to that newspaper, that Bush is saying of Trump: “The man is not conservative.”

“Besides, he tries to personalize everything. If you’re not totally in agreement with him you’re an idiot, or stupid, or don’t have energy, or blah blah blah,” Bush continued in English, according to the Times.

Trump, in his exclusive with Breitbart News, ripped that argument—that somehow he’s not a conservative.

Trump also fired back at Rubio for aiming to undercut his campaign slogan, “Make America Great Again.” The campaign slogan was used by Ronald Reagan in the 1980 campaign for the White House alongside George H.W. Bush, Jeb’s father.

According to the New York Times, this week Rubio—while campaigning in Carson City, Nevada—said Trump’s campaign slogan isn’t an accurate assessment of the country. Rubio argued America is “great” now.

“There’s one other candidate running, he says he’s going to make America great again,” Rubio said at a community center before a crowd of 200, according to the New York Times. “I understand what he means by that. I don’t mean that as a slight.”

Trump, in response, told Breitbart News that this means Rubio is complacent with where America is now—and doesn’t believe there is room for improvement in the country. Trump also called Rubio “Jeb’s plebe.”

Rubio was trained by Bush in Florida politics before the two, along with 15 other Republicans including Trump, started competing against each other for the GOP nomination this cycle. Rubio and Bush have nearly identical political viewpoints on immigration and trade, and as Bush and his campaign keep slipping more and more, it’s expected the donor class paymasters will get behind Rubio down the road, because he would give them everything they want if he’s elected president, just like Bush would.

Trump thinks that no matter who the establishment puts forward as the donor class candidate—whether it be Bush, or if Bush continues failing then Rubio, or Ohio Gov. John Kasich, for instance—that “they are all controlled” by the paymasters funding their campaigns.

“They are controlling the politicians—and I used to be one of those people, at the highest level, I was one of them,” Trump said. “Nobody knows the game better than I do. I think part of the reason I’m resonating with the public is that I don’t want money. I feel oftentimes foolish when people want to give me millions and millions of dollars that I’m turning them down. I feel foolish. I just hope the public appreciates what I’m doing.”

Trump said that the donor class paymasters who he says are controlling the politicians like Bush and Rubio “are looking to benefit themselves or their company, whereas I’m looking only to benefit the people of the United States.”

When it comes to the border, Trump again noted that he’d build a wall if elected president.

“I know this: We need a wall, and we need it badly,” Trump told Breitbart News. “And it’s got to be an impenetrable wall. We’re taking in people legally, but we’re not taking in any more illegals, but we will take them in legally.”

When it comes to the next debate, Trump said he’s prepared for it, but he does “hope I’m treated better than I was at the last debate.”

“Everyone said I won the last debate—according to Drudge and Time, Drudge and Time did a poll and they said I won,” Trump said. “That’s Time Magazine. Yeah, I’ve bee, I think, preparing my whole life for the next debate.”

In Case You Missed It:  Cancer expert says U.K. seeing spike in "non-covid deaths," nobody willing to call out vaccine elephant in the room
Posted in Freedoms.

By Tim Dunkin When he authored the Kentucky Resolution of 1798,Thomas Jefferson based his arguments for nullification, in part, upon...