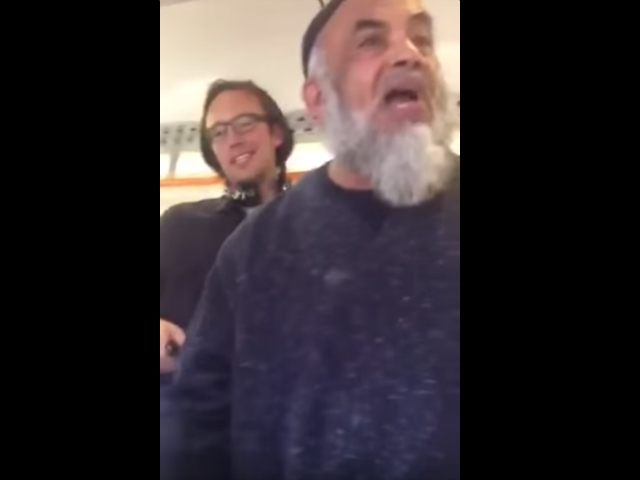 Some heated scenes from a London Overground train emerged on YouTube yesterday as a Muslim man appears to be shouting at a woman who later identifies herself as a Christian for putting her feet on the train seats.

The video begins with the man citing his objection to a lady – identified via Facebook as Ruby Butler – with her feet on the train seat next to her. He says that because he is a Muslim, he doesn’t pray with his shoes on.

At that point a man intervenes and tells him “she’s just not worth arguing with”. But the continues, shouting, “You should be in prison!” at her. Butler responds, “What? For putting my feet on a chair?”

Another man from the other end of the carriage then interjects. He can be heard saying, “This is England man, it’s England.”

“I live in England okay? I was born here,” says the Muslim man, who has a thick, Pakistani accent.

“Don’t argue with me I’m born here okay?” he continues. “I have as much rights as you have okay?”

“Who’s talking about rights?” the man says in response, and the two continue to argue before they agree to get off the train together for what appears to be an impending fight.

In Case You Missed It:  Court to Lawmakers: It’s Not OK to Treat Churches and Businesses Differently During COVID-19

“But I am a Muslim I can’t pray with you okay?” he replies.

“Listen, this is not a Muslim country,” Butler replies, before the man gets off the tube at Brondesbury in West London.

While the lady was in fact wrong to have her feet on the train seat, it arguably did not warrant that level of reaction from the man, especially not using religion as a rationale.

Breitbart London reached out to Ms. Butler for comment but at the time of publishing had not heard back.

The Hijrah Into Europe “Refugees” colonize a continent.

Robert Spencer Approximately 104,460 asylum seekers arrived in Germany during the month of August, setting a new record. That makes 413,535...