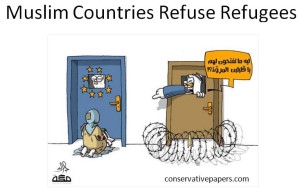 Five of the wealthiest Muslim countries have taken no Syrian refugees in at all, arguing that doing so would open them up to the risk of terrorism. Although the oil rich countries have handed over aid money, Britain has donated more than Saudi Arabia, the United Arab Emirates and Qatar combined.

Between 10 and 12 million Syrians have been displaced by the bloody civil war raging in their country. Most still remain within Syria’s borders, but around four million have fled over the borders into neighbouring countries, mostly Turkey Jordan and Lebanon, and beyond.

Lebanon, which has 1.1 million Syrian refugees, shut her borders to the Syrians in June of last year. Jordan, host to another 630,000, followed suit in August last year, preventing more Syrians from abandoning their country.

By early August 2015, European states had received nearly 350,000 asylum applications from Syrians, nearly a third of whom applied to Germany for asylum. Another 65,000 have applied Sweden and 50,000 in Serbia. Hungary and Austria have received close to 19,000 applications each although that figure is likely to rise, while the UK is processing 7,030 applications, according to the United Nations Refugee Agency (UNHCR).

Extraordinary failure to act by Arab countries. Everyone should know.
Hat-tip @CBCNews and @NatashaFatah pic.twitter.com/a0OW32cgjP

Yet amidst cries for Europe to do more, it has transpired that of the five wealthiest countries on the Arabian Peninsula, that is, Saudi Arabia, UAE, Qatar, Kuwait and Bahrain, not one has taken in a single refugee from Syria. Instead, they have argued that accepting large numbers of Syrians is a threat to their safety, as terrorists could be hiding within an influx of people. Sherif Elsayid-Ali, Amnesty International’s Head of Refugee and Migrants’ Rights, has slammed their inaction as “shameful”.

He said: “The records of Gulf countries is absolutely appalling, in terms of actually showing compassion and sharing the responsibility of this crisis… It is a disgrace.” None of the Gulf States signed the 1951 Refugee Convention, which legally defines a refugee as “A person who owing to a well-founded fear of being persecuted for reasons of race, religion, nationality, membership of a particular social group or political opinion, is outside the country of his nationality”. However, they have taken refugees in the past.

Twenty-five years ago, hundreds of thousands of Kuwaitis fleeing Saddam Hussein’s invasion were given refuge. According to Arabian expert Sultan Sooud al-Qassemi: “in Abu Dhabi, the government rented out entire apartment blocks and gave them to families for free.”

Instead the countries, all of which are within the Top 50 list of wealthiest nations by GDP, have opted to donate aid to those affected by the crisis. According to the Daily Mail, the UAE has funded a refugee camp in Jordan giving shelter to tens of thousands of Syrians, while Saudi Arabia and Qatar have donated funds, food, shelter and clothing to Syrians in Lebanon, Turkey and Jordan.

Total donations from the Gulf States are believe to total £589 million, less than a quarter of America’s £2.8 billion, and a fraction of the £65 billion they spent on defence in 2012 alone. The UK has handed over £920 million so far, but the Prime Minister yesterday pledged to increase that figure to £1 billion. He also promised to take in thousands more refugees.

In Case You Missed It:  Obama Holdovers with Terrorist Connections Still Employed by the DoJ

Al-Qassemi has argued in the that the standing that the Muslim countries now have in the world confer on them a moral obligation to step in. “The Gulf States have emerged as the nerve centres of Arab diplomacy, culture, media production, commerce and tourism, amassing an unprecedented degree of soft power unrivalled in the region and beyond,” he said.

They also form “the most influential bloc within the 70-year-old Arab League.”

“But with great power comes great responsibility. The Gulf must realise that now is the time to change their policy regarding accepting refugees from the Syria crisis. It is the moral, ethical and responsible step to take.”

by RAHEEM KASSAM Some heated scenes from a London Overground train emerged on YouTube yesterday as a Muslim man appears to...