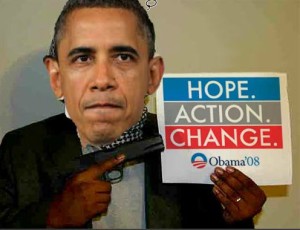 Murder rates are skyrocketing in large U.S. cities, but President Obama’s progressive pro-crime policies and endless racial provocations have nothing to do with it, the New York Times predictably declared in a recent article.

Nowadays Americans are being killed and maimed explicitly because of their race. Execution-style cop killings are becoming distressingly common. Killings and vicious assaults based on the skin color of the civilian victim are also becoming common.

That any of this is happening shouldn’t surprise anyone who follows public events. For years media outlets have acted as uncompensated publicists for the Obama administration’s ongoing campaign to turn America into the progressive paradise that is Robert Mugabe’s Zimbabwe.

And they’re still doing it today. Some downplay the evidence of a crime wave.

Smug left-wing journalists Jason Linkins of the Huffington Post and Jesse Walker of Reasonsnickered at the Manhattan Institute’s Heather Mac Donald when she argued in late May that after two decades of falling crime rates nationwide, anti-cop sentiment was boosting crime rates.

The “most plausible explanation of the current surge in lawlessness is the intense agitation against American police departments over the past nine months,” wrote Mac Donald in a Wall Street Journalop-ed. Walker wrote at the time that “any talk of a ‘nationwide’ crime surge is at best premature, at worst sheer fearmongering.” Linkins wrote that Mac Donald’s column contained “a load of hot nonsense.”

The legacy media has helped to inflame racial tensions in a country that had relative racial harmony before Barack Hussein Obama was inaugurated. So it shouldn’t come as a surprise to anyone who has been following the news that the dead-tree and TV network media outlets are now covering up Obama’s role and their own in stirring the pot.

Murders are up, but Obama and the Left are not to blame

Cities across the nation are seeing a startling rise in murders after years of declines, and few places have witnessed a shift as precipitous as this city. With the summer not yet over, 104 people have been killed this year—after 86 homicides in all of 2014. More than 30 other cities have also reported increases in violence from a year ago.

But Obama and the Left are not to blame.

Times reporters Monica Davey and Mitch Smith seem genuinely perplexed, scratching their heads wondering where all this bloody violence might be coming from.

Law enforcement experts blame “disparate factors” though “no one is claiming to know for sure why murder rates are climbing,” Davey and Smith write. Recycling boilerplate from old news article, they write that rivalries between “organized street gangs,” “the availability of guns,” and “a growing willingness among disenchanted young men in poor neighborhoods to use violence to settle ordinary disputes” as major factors.

Maybe it’s the “Ferguson effect,” they speculate, describing it as “the notion that less aggressive policing has emboldened criminals.” Although it “is a popular theory for the uptick in violence,” they write that “many experts dispute that theory.” They quote criminology professor Alfred Blumstein of Carnegie Mellon University saying, “[t]he equilibrium has changed between police and offenders.”

St. Louis, Mo., police chief Sam Dotson has been credited with coining the term the “Ferguson effect.” He was referring to the Left’s never-ending drumbeat against the police which is causing some cops to refrain from using force when it is appropriate. Recently in Birmingham, Alabama, a plainclothes police officer was beaten senseless by an angry black driver. The cop admits he hesitated in defending himself because he was afraid he might be called racist.

This pervasive cop-hatred contributed to civil unrest last fall in Ferguson, a St. Louis suburb, both before and after a grand jury decided not to indict white police officer Darren Wilson for killing young black male Michael Brown. Brown, who had just held up a convenience store minutes before, battered the policeman, and tried to grab his handgun. Wilson shot Brown in self-defense but the politically motivated lie that Wilson gunned him down while he was trying to surrender persists and the media perpetuates this lie by continuing to describe Brown as an unarmed black man instead of explaining the circumstances of the case. (One notable exception is the Washington Post‘s Jonathan Capehart, a black left-wing columnist who acknowledged in March that Wilson was a victim of Brown, and not the other way around.)

Of course the New York Times and the rest of the mainstream media have done everything in their power to ramp up racial hostility across the fruited plain during the Obama presidency.

They lied about why Darren Wilson had to shoot his would-be killer “gentle giant” Michael Brown. They turned racist, black, gay Obama supporter Vester Lee Flanagan II, who murdered two white former TV station colleagues (in part because they were white) during a live broadcast in Virginia, into an example of why more gun control was needed. They sat by silently as then-Attorney General Eric Holder let voter intimidation charges against New Black Panther Party members in Philadelphia slide because black-shirted black nationalists are an important component of the Obama coalition.

Then there is President Obama’s relentless anti-police rhetoric, a toxic blend of anti-white racism and Marxist cop-hatred. It is as if Obama pal Bill Ayers, the unrepentant terrorist and Black Power supporter who helped to launch Obama’s political career, were running the White House communications office.

Execution-style cop killings and assaults on police are becoming more commonplace ever since two New York City police officers were gunned down in their squad car last December.

Houston sheriff’s deputy Darren Goforth, a white man, was shot point-blank in cold blood 15 times last month reportedly by a black man named Shannon J. Miles. But there is no racial motive, we have been assured. “Mental illness” is to blame, the media report. The riots in Baltimore and Ferguson, Mo., were understandable “uprisings” against the unjust status quo that holds black people down, they say.

Obama’s progressive soulmates have also played a role in the new crime wave.

Steinle’s blood is on the hands of the radical left-wing sheriff, Ross Mirkarimi (D), who set Lopez-Sanchez loose on the streets over the objections of Immigration and Customs Enforcement (ICE). Federal officials had characterized the man as an “enforcement priority” and filed an “immigration detainer” asking jail officials to hold him until they could take custody. Mirkarimi let him go because like a good progressive he doesn’t believe the nation should have enforced borders. That any desperado who wants should be able to saunter in the United States is also apparently the view of the Obama administration.

Meanwhile, much of the anger in the streets that has turned into rioting and looting sprees has been underwritten by radical anti-American financier George Soros to advance the goals of the Black Lives Matter movement. Much of the rest of it has been inspired by the community organizer in the White House and his minion, the former Attorney General Eric Holder. The mainstream media has been playing a supporting role, turning every police shooting of a person of color into a cause celebre, regardless of the circumstances leading to the shooting.

And as each day goes by the rhetoric from the black-nationalist Left grows more chilling, unchallenged by the Obama administration and the mainstream media.

Last month Nation of Islam leader Louis Farrakhan openly called for the slaughter of white Americans. Farrakhan called for “10,000 fearless men” to come forward and get the massacres underway. “Retaliation is a prescription from God to calm the breasts of those who kill us. Stalk them and kill them let them feel the pain of death that we are feeling.”

It’s funny that now we’re moving to a time where the predator will become the prey.”

Today we live in a time where the white man will be picked off and there’s nothing he can do about it. His day is up. His time is up. We will witness more executions and killing of white people and cops than we ever have before. We see with the Houston, Texas shooting and we see with the news reporting shooting in Virginia, it’s about to go down. It’s open season on killing white people and crackers. The Black Lives Matter movement wasn’t enough.

It’s not safe no more to be white in America. Lurking behind any corner could be an angry black man ready to take yo # out. It’s a reality. It’s open season on killing whites and police and they better make some serious, serious changes, social changes, at this point, but it ain’t looking good.

Normally this kind of extremist rhetoric would be ignored or laughed at, but we do not live in normal times.

President Obama doesn’t condemn any of it, which is reason for all Americans to worry.

By Arthur Weinreb The picture of Alan Kurdi, nicely dressed and lying dead on a Turkish beach, went around the...