The Spanish government is warning that amongst the multitudes of refugees that are trying to penetrate Europe, there are ISIS agents trying to infiltrate the nation. According to the report:

Spain’s interior minister on Monday called for tighter controls to prevent members of the armed jihadist group Isis from infiltrating the “avalanche” of refugees arriving in Europe from Syria.

The Spanish government has rejected the Commission’s proposal to place refugees on its territory. The executive’s plan should be “proportionate, fair and realistic”, said Minister of Foreign Affairs Jose Manuel García-Margallo.

France warned on Tuesday that it would be a mistake for Europe to take in all refugees persecuted by Islamic State militants in Syria and Iraq, and called for a plan of action to ensure the Middle East’s diversity remained despite the mounting crisis.

French Foreign Minister Laurent Fabius “How can we doubt that, among this avalanche people who are not refugees could infiltrate themselves,” he added in the interview published in the conservative newspaper.”

French police are now blocking a hundred migrants from crossing from Italy in to France in the French border town of Vintimille.

“Europe’s borders must be protected. We cannot be like a piece of cheese with holes in it so that they [immigrants] can be crossing in and out. Serious police and military steps must be taken and also steps that they would remain at home,” Mr. Orban said in an interview on state radio on Friday.

Interior ministry spokesman Ivan Metik said that Muslims would not feel at home in Slovakia because there are no mosques in the nation.  Slovakian government said it will now be accepting Christians who are persecuted by Muslims, but no Muslim immigrants.

President Miloš Zeman of the Czech Republic had some forthright and unflattering things to say about Islam.

It is necessary to clearly name the enemy of human civilisation. It is international terrorism linked to religious fundamentalism and religious hatred. As we may have noticed after 11th of September, this fanaticism has not been focused on one state exclusively

Artur Fiser, spokesman for We Do Not Want Islam, told CTK.

“Islamic barbarism is infiltrating us with a growing speed, but it has not touched upon majority society,” Fiser said.

Dutch Partij voor de Vrijheid PVV leader Geert Wilders called the wave of refugees pushing into Europe an “Islamic invasion”, during a parliamentary debate on Thursday the party leader said “they threaten our prosperity, our security, our culture and identity.”

Polish Prime Minster Ewa Kopacz has said clearly that she opposes any kind of mandatory or quota system for asylum seekers.  Kopacz has agreed that Poland would admit only 60 families from Syria. Yet they would be selected based on religious critieria – the refugees should all be Christians only, No Muslims. Poland refuses to accept illegal immigrants landing each year on Italian, Spanish or Greek beaches.

Italians are resisting the huge influx of immigrants arriving on their shores, with some politicians calling on supporters to say “no, with every means, to every new arrival”

Giorgia Meloni, the head of Silvio Berlusconi’s centre-Right Forza Italia party, said boats departing from Libya “should be stopped as they leave,” while boats with smugglers on board “should be sunk”.

Conservative politicians called this week for boatloads of refugees to be sent back to Libya, while the system of migrant reception centres is on the verge of collapse.

The regional president of many Italian region of Italy are refusing to accept any more migrants in to their provinces.

Bulgaria is now building fence to keep out surge of Muslim illegal alien invaders from the Middle East and North Africa from entering their country.

Denmark shuts rail link to Germany off over the migration crisis, Danish police that also closed the main motorway between the two countries on Wednesday.

The ferry crossing at Rodby, one of the busiest in Scandinavia, would remain closed to trains, the authorities said. “We know that many of them want to go to Sweden, but naturally we cannot let that happen,” police spokesman Carsten Andersen said.

For security reasons, the police, in collaboration with German authorities, decided that for the near future no travellers from Syria, Iraq, etcetera will arrive in Denmark by ferry to Rødby,” police said in a statement. 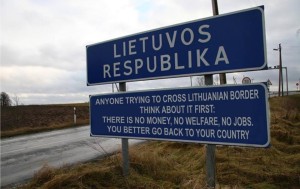 Take 6 mins out of your day and watch this abortion survivor, Melissa Ohden, testify before Congress

Take 6 mins out of your day and watch this abortion survivor, Melissa Ohden, testify before Congress. This is a...