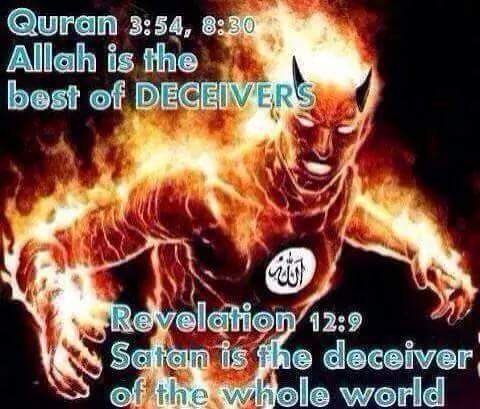 I am an atheist, so I don’t think that there is a Satan and God, but if I am wrong, if there is a Satan, Islam must be the words of Satan, not from a “holy” God. None of the “God” conceptions of other religions in the world are as cruel as so-called religion Islam. In fact, Islam is not a religion, but a barbaric death cult full of violence, savageness, mass murder, rape, sex slavery, pedophilia, necrophilia, plunder, occupation, forcing to convert by sword, cutting the throat of the “infidels” or burning them alive. Today there is not a “religion” in the world as cruel as that barbaric death cult Islam, but shamelessly Muslims represent Islam as “religion of peace”.

How can these verses of Quran can be considered from a “religion of peace”, coming from a “holy” God:

Surat Al-‘Anf?l
[Remember] when your Lord inspired to the angels, “I am with you, so strengthen those who have believed. I will cast terror into the hearts of those who disbelieved, so strike [them] upon the necks and strike from them every fingertip.”

Surat Al-?aj
These are two adversaries who have disputed over their Lord. But those who disbelieved will have cut out for them garments of fire. Poured upon their heads will be scalding water.

So when you meet those who disbelieve [in battle], strike [their] necks until, when you have inflicted slaughter upon them, then secure their bonds, and either [confer] favor afterwards or ransom [them] until the war lays down its burdens.

Surat At-Tawbah
And when the sacred months have passed, then kill the polytheists wherever you find them and capture them and besiege them and sit in wait for them at every place of ambush.

Surat Al-Baqarah
“And kill them wherever you overtake them and expel them from wherever they have expelled you, and fitnah is worse than killing.”

Surat At-Tawbah
The Jews say, “Ezra is the son of Allah “; and the Christians say, “The Messiah is the son of Allah .” That is their statement from their mouths; they imitate the saying of those who disbelieved [before them]. May Allah destroy them; how are they deluded?

When you critize Islam, some people idiotically mention about The Old Testament, The inquisition and The crusaders.Yes, some orders of Islam had been taken by Muhammed and written as Quran verses (so called words of Allah) from the Old Testament like stoning to death for adultery, but today there is no Jew applying this order. This brutal application had been ended by Jesus -who was from Jew community- with a smartly tactic:

“When they kept on questioning him, he straightened up and said to them, “Let any one of you who is without sin be the first to throw a stone at her.”
(Matthew 5:39) http://biblehub.com/matthew/5-39.htm

So, today all brutal parts of the Old Statement are out of order. Judaism had been reformed in historical process very long time ago and so did Christianity. Today there is no Christian burning any woman and blaming her to be a witch, there is no inquisition court in any part of the world. Christiany had been reformed hundreds of years ago, but so called “religion of peace”, Islam, has been never reformed. It is the only “religion” which has current applications just the same as they used to be in medieval age. That is natural because Islam cannot be reformed, because founder of this barbaric death cult Muhammed had said many times in the book written by him called Quran as “None of the words of Quran will be changed till doomsday”, so he had guaranteed that his orders will be valid till the end of existence of his own product death cult, Islam.

It is also idiotically to mention “crusades” against today’s barbaric actions of ISIS members. First of all, “crusades” were after 400 years of the occupation of homeland of early Christians and also Jews by Muslims and was absolutely a rightful struggle to get their own homeland under occupation of members of barbaric death cult Islam. Also ISIS members are killing humans currently in 2015 same as Muslims did in 7. century. They are occupying homeland of “infidel” people of Syria and Iraq like Yezidis and Orthodox Christians of that region like Arameans, Assyrians, Nestorians, killing and raping them, making them sex slaves, but today there is no violence caused by Christians. None of the Christians cuts throats of Atheists or Muslims or burn them alive like ISIS members currently do today to all non-Muslims. None of the Jews kills Atheists, Buddhists or Christians by being a suicide bomber. None of the Buddhists makes Christians or Muslims sex slaves. Even people calling themselves “Satanists” don’t kill so much human all over the world as Muslims kill. Look at the Bangladesh, many bloggers criticising Islam have been killed brutally by being craved just because of being secular and writing articles criticising Islam a few moths ago. In Saudi Arabia, secular blogger Raif Badawi has been whipped by the government and put in jail for 10 years just because of being a secular and freethinking human and criticising Islam, and he is still in jail, because Islam has no respect for human rights, freedom of expression and also no respect to women’s rights, chidren’s rights, LGBTI persons rights. As you know Quran verses and hadiths order to kill all homosexuals, transsexuals and trannies and according to this command of Islam, ISIS members have brutally killed many LBGTI persons by throwing from the top of high buildings. Women in Saudi Arabia have just got their right to vote 2015, in fact which is an ordinary human right in all civilized countries of the world and still it is forbidden for women in Saudi Arabia to drive a car. Is there any other outdated country in the world like Muslim countries?

In fact, this so-called “religion”, death cult named Islam was not produced/written by Muhammed with so original ideas, but a synthesis of monotheistic religions of current Arabian Peninsula like early Christianity, Judaism and also Sabie Religion which was a very popular monotheistic religion in that age in Arabian Peninsula.
(Sabians: https://en.wikipedia.org/wiki/Sabians)

Muhammed had chosen only brutal parts of these ancient religions like taking “stone to death for adultery” from the Old Testament, but he had never chosen peaceful parts of Christianity. Muhammad had never take any peaceful word of Jesus as example and put in its book Quran like:

“But I tell you, do not resist an evil person. If anyone slaps you on the right cheek, turn to them the other cheek also.”(Matthew 5:39) http://biblehub.com/matthew/5-39.htm

or another peaceful word of Jesus against violence like “Put your sword back in its place,” Jesus said to him, “for all who draw the sword will die by the sword.” (Matthew 26:52 ) http://biblehub.com/matthew/26-52.htm

Let me emphasize, please: You can NEVER reform Islam, because all possible reforming ways had been blocked since the founding of this death cult by its founder Muhammed as saying many times “None of the words of Quran will be changed till doomsday”. So you cannot even try to reform Islam, you will be blamed as being a heretic/infidel, and according to Quran verses you have to be killed by any Muslim:

also you can be killed too because of trying to reform Islam according to theQuran verses ordering to kill “apostates”:

So, you cannot even say “The world is round”. It is enough to be blamed as being an infidel/heretic or apostate which deserve to be killed according to the Quran written by war lord, pedophile, necrophile, lier and savage Muhammad. Acording to this ignorant, primative mentality against science, Abdul Aziz bin Abdullah bin Baz who was the Grand Mufti of Saudi Arabia (Supreme Religous of Saudi Arabia) had said “The earth is flat. Whoever claims it is round is an atheist deserving to be punished”. No matter the science had proved that the world is in fact round, no matter there are many photograps of world from space showing that is it round. The scince has no value in front of the verses of Quran written by Muhammad or “hadiths” which are the words of Muhammad that had been said to the people arround him or the “sunnah” which was about the all applications of Muhammad that is considered “holy” actions of the “biggest and last prophet of Allah” including raping the infidel women, making them sex slavery, torturing for learning the place of golds/money, abusing a girl in only 9 years old (Ayshe) as considering her a “wife” by a so-called marriage, in other words pedophilia, also necrophilia which had been done by Muhammed too on one of his wifes who was death (As you can remember, a Persian Islamist named Zemzemi Abdul Bari, had declared in 2011 that all Muslim men can make sex with their wifes after the death of them in 6 hours accordingt to the same action of Muhammad. A year later, in Egyptian Parlament, a permission, allowing to the necrophilia was discussed as declared by Zemzemi Abdul Bari referring to the same necrophile action of Muhammad and also they demanded to increase the offical marriage age of the girls to 14 years old).

So, if there is a Satan, it must be Muhammad and the orders of Satan must be Islam.

Putin: ‘We must aim to destroy ISIS at all costs’; Is it Time We Join Him?

Following Russia setting up an air base in Syria to help the Middle East country in its fight against ISIS,...