Submitted by Daniel McAdams via The Ron Paul Institute for Peace & Prosperity, 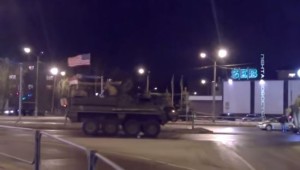 When a Russian bomber flew over international waters some 25 miles off the southwest tip of England last week, UK Defense Secretary Michael Fallon called Russia “a real and present danger.” The UK government scrambled jet fighters to meet the Russian aircraft as a show of force.

Said Secretary Fallon of the incident, “NATO has to be ready for any kind of aggression from Russia, whatever form it takes.” He added that, “NATO is getting ready,” warning particularly that Russia may soon move to invade the Baltic countries of Estonia, Latvia, and Lithuania.

Reading the feverish Twitter feed of NATO’s Supreme Allied Commander Europe, Gen. Phil Breedlove, one would get the impression that NATO is already at war with Russia. Fighter jets sit menacingly atop aircraft carriers as the General beams about NATO member countries’ commitment to contribute to the fight.

The message is clear: Russia is about to attack! NATO has, for no understandable reason, found itself in Russia’s crosshairs. NATO cannot figure out how it is that Russia could possibly feel threatened by its actions, which, unlike Russia’s are not in the slightest provocative.

Russian military plane over international waters 25 miles from the UK coast is “real and present danger” to NATO. Yet…

Yet yesterday US combat vehicles conducted a military parade and show of military force in Estonia just 300 yards — yards! — from the Russian border. That is just over 60 miles from downtown St. Petersburg.

This is not a provocation, we are to believe. This is not a “real and present danger” to Russia. NATO is exempt from the rules it imposes on its enemies.

In the Guardian’s review of a new book by Politics professor George Sakwa, the current fallout from a near quarter century of post-Cold War NATO policies is perfectly captured:

The hawks in the Clinton administration ignored all this, Bush abandoned the anti-ballistic missile treaty and put rockets close to Russia’s borders, and now a decade later, after Russia’s angry reaction to provocations in Georgia in 2008 and Ukraine today, we have what Sakwa rightly calls a “fateful geographical paradox: that Nato exists to manage the risks created by its existence”.

That line bears repeating: “Nato exists to manage the risks created by its existence.”

In Case You Missed It:  Kamala Harris Delivers Another Word Salad, Repeatedly Brings Up “The Significance of the Passage Time” (VIDEO)
Posted in Freedoms and tagged Border, Cold War, NATO, Russia, United Socialist States of America.

The below summarization of Barack and Michelle Obama’s 5 year reign in the White House is by far the best...