Europe is “not dealing with the cause” of the current refugee crisis, Syrian President Bashar Assad said in an interview with Russian media, RT among them, adding that all Syrian people want is “security and safety.” 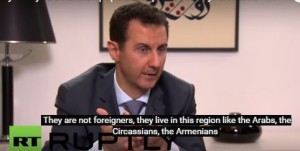 “It’s not about that Europe didn’t accept them or embrace them as refugees, it’s about not dealing with the cause. If you are worried about them, stop supporting terrorists. That’s what we think regarding the crisis. This is the core of the whole issue of refugees.

“If we ask any Syrian today about what they want, the first thing they would say – ‘We want security and safety for every person and every family’,” the Syrian president said, adding that political forces, whether inside or outside the government “should unite around what the Syrian people want.”

The “Syrian fabric,” as Assad has called it, includes people of many ethnicities and sects, including the Kurds. “They are not foreigners,” the Syrian president said, adding that without such groups of people who have been living in the region for centuries “there wouldn’t have been a homogeneous Syria.”

Assad said that the dialogue in Syria should be continued “in order to reach the consensus,” which cannot be implemented “unless we defeat the terrorism in Syria.”

“If you want to implement anything real, it’s impossible to do anything while you have people being killed, bloodletting hasn’t stopped, people feel insecure,” the Syrian president said.

““I would like to take this opportunity to call on all forces to unite against terrorism, because it is the way to achieve the political objectives which we, as Syrians, want through dialogue and political action,” Bashar Assad said.

Europe was on lock-down last night as states across the continent said they could take no more migrants and slammed...