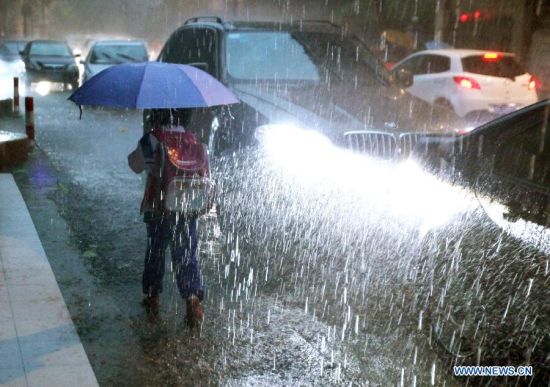 The developing El Nino is stronger than the last major event of its type in 1997.

According to the US National Oceanographic and Atmospheric Administration (NOAA) and the UK Met Office, this El Nino is shaping up to be the strongest since records began in 1950.

El Nino is a natural phenomenon which occurs every two to seven years and lasts between six and 18 months.

It manifests as a warming of the surface waters of the eastern equatorial Pacific Ocean. The current El Nino is so strong that in some areas sea surface temperatures (SSTs) are more than 2 degrees Celsius above the long-term average.

Aside from the devastating effect that El Nino has on the Peruvian fishing industry, the real significance lies in the change in weather patterns that it produces around the globe.

In the Pacific, the warmer waters in the eastern part of the ocean have spawned more typhoons, super typhoons and hurricanes than usual, with the tracks of those storm systems also being altered considerably.

Severe weather conditions have been experienced around the Asia-Pacific region.

Changes in the weather around the Pacific region are hardly surprising, but almost every continent is impacted by a strong El Nino.

In Australia, many parts of the country have had an exceptionally hot summer with temperatures regularly exceeding 40C.

In South America’s Atacama Desert, one of the driest regions on earth, the heaviest rain in 80 years resulted in severe flooding and the deaths of more than 20 people.

In North America, where much of the south and west has been experiencing the worst drought in a century, El Nino could bring the benefit of rain, although if the El Nino of 1997-98 is anything to go by, that rain could result in severe flooding and deaths.

Even Europe is not immune from the effects of an El Nino.

If this year’s event follows the pattern of previous ones, then winter weather here could be colder and drier than average and last well into spring.

No two El Ninos are the same.

There are lots of other short and long-term variables in the global weather patterns, but the coming months could see some unusual and spectacular weather in many parts of the world.

In Case You Missed It:  Joe Biden Says The ‘Protests’ In The Summer Of 2020 ‘Unified’ People Of Every Generation (VIDEO)
Posted in Freedoms and tagged California, United Socialist States of America.

For the second day in a row, Pyongyang raised the ante on rhetoric suggesting it might conduct a prohibited nuclear...