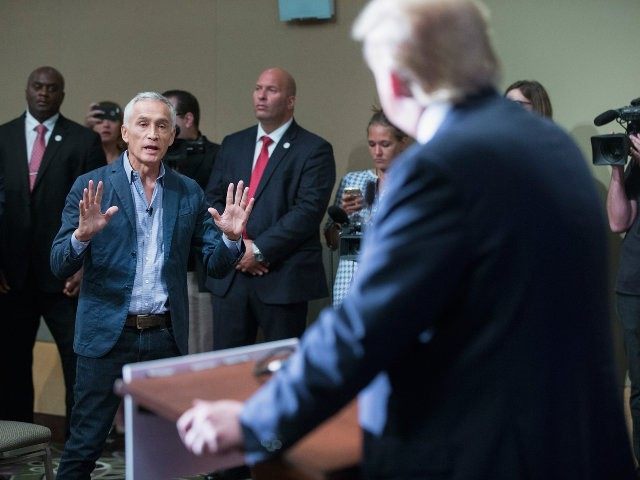 Ramos argues that manually deporting the nation’s entire illegal alien population in the span of two years would come at a one-time, catch-all price of $137 billion.

However Ramos, who has expressed support for an open-border immigration policy, fails to inform viewers of the far greater costs that could be saved by deporting the illegal population– a net total of $2.7 trillion in savings. Nor does he mention the benefits to community safety, public education, and our nation’s strained entitlement programs.

Ramos arrives at his $137 billion figure by applying the average $12,500 cost of deporting a single person to the 11 million illegal aliens in the country. Assuming Ramos’ methodology is correct (is it not), Ramos’ estimate means that for 3.6 percent of the federal budget the United States could permanently resolve its illegal immigration problem.

Ramos’ methodology, however, is fatally flawed. First, and most importantly, Ramos fails to take into account the funds that would be saved from removing the illegal population.

Studies show that, due to all of the federal benefits illegal aliens receive at taxpayers’ expense, the cost of keeping illegal aliens in the United States far exceeds Ramos’ inflated cost estimate for deportations.

In fact, deporting the illegal alien population would actually save U.S. taxpayers a net total of $2.7 trillion over the next 50 years, according to a 2010 study from Heritage scholar Robert Rector.

Each illegal alien household costs taxpayers a net total (i.e. federal benefits illegals receive minus taxes illegals contribute) of $719,350 over the course of that household’s lifetime. This is because the benefits illegal aliens receive in education, subsidized housing, food stamps, and medical expenses from U.S. taxpayers outweigh that which they contribute through taxes. Experts estimate that there are around 3.88 million illegal alien households in the United States– meaning that the removal of the illegal alien population would results in $2.7 trillion of savings.

As Rector wrote in his 2010 report, few “really understand the current size of government and the scope of redistribution… Unlawful immigrants, on average, are always tax consumers; they never once generate a ‘fiscal surplus’ that can be used to pay for government benefits elsewhere in society.”

Rector projects that the net cost deficit would only increase if the illegal population were to be legalized under an amnesty program because they would then be entitled to even more federal benefits.

Ramos’ deportation cost estimates, however, are also grossly exaggerated. The removal of roughly 11 million illegals would not require that many manual deportations. Experts have explained that most illegals would begin leaving en masse of their own accord– at no cost to U.S. taxpayers– at the first sign that the nation is serious about enforcing its immigration laws.

Ramos similarly did not tell his viewers that the removal of the illegal alien population would have a long-term positive impact on crime levels. As Breitbart News has previouslyreported, government data reveals there is a strong correlation between immigration and crime. This high correlation extends into second- and third-generation of immigrants, as the children of immigrants commit crimes at higher rates than their parents. This observation has caused Manhattan Institute scholar Heather Mac Donald to observe, “unless we can prevent immigrants from having children, a high level of immigration translates to increased levels of crime.”

Ramos also did not feel it necessary to mention how a reduction in the illegal population would also reduce the opportunity for legal chain migration through anchor babies– thus passing down taxpayers savings to generations of American citizens.

Nor did Ramos discuss how reductions in the illegal alien population would help to improve overburdened schools whose educational resources are being sapped by mass immigration. For instance, a new report details that in the majority-minority Boston public schools, students hail from 142 countries and speak 84 different languages. Boston schools have struggled to keep up with the inflow of a diverse student population. As the liberal website Vox recently reported, mass diversity has contributed to a drop in the nation’s SAT test scores. And in Boston, “only 1 out of every 5 black or Latino boys who start kindergarten in Boston will graduate from high school.” “Over the course of their lifetime, it costs us $400,000 per person who drops out,” estimates Anna Egalite, a Harvard post-doc who has studied minority school students.

Jorge Ramos’, however, does not send his children to these overburdened public school. As Breitbart News has previously reported, Ramos “sends his kids to elite private schools, including a Miami preK-12 school with tuition that reaches above $30,000 a year per student. ”

It is perhaps not surprising that Ramos does not share these facts and figures with his viewers. Ramos– who immigrated to this country in the 1980s– has long argued that the United States should dissolve its borders and implement an immigration policy with North America similar to that of the European Union.

“The taboo issue of an open border should be tackled. Not now. Politically it is impossible even to discuss that,” Ramos told Time Magazine in 2014, “But I don’t see why we can’t have in North America the same immigration that they have within the European Union.”

The United States already has the most generous immigration policy in the world. Most Americans say our immigration policy is too expansive. For every two immigrants admitted to the United States between 2000 and 2014 only one job was added, according to a report from the Center for Immigration Studies. Today 42.1 million U.S. residents are foreign born and in eight years time, the foreign born share of the U.S. population will reach an all-time high.

Ramos– who on his website notes that he “has been called ‘the voice of the voiceless’ for other immigrants like him”– has been open in his appeal to racial solidarity as a higher organizing principle than national solidarity. He has even gone so far as to describe Hispanics as better and more courageous than other Americans. The 2014 Time Magazine profile observed that in a television segment about two window washers who were trapped in the air by a broken support cable, Ramos made a point of calling the workers, “dos Hispanos.”

As the Time reporter wrote:

I ask [Ramos] why he identified them by ethnicity in his introduction. “Who else would risk their lives like that?” [Ramos] asks me in return… “It takes an Hispanic to dare to do a job like this,” says Maria Elena Salinas, his co-anchor, now speaking Spanish to an audience of more than 2 million. Ramos doesn’t miss a beat. “Our great workers are invisible to the rest of the United States,” he says, “but they are there in the most dangerous jobs.”

While Ramos does not think American citizens are entitled to borders, he certainly believes in them for himself and his family. This is not dissimilar from Facebook’s Mark Zuckerberg who has visited other countries to publicly criticize U.S. immigration law and advocate for open borders, all while enforcing a tight border perimeter around his multi-million dollar home.

El Nino set to be strongest ever

Richard Angwin The developing El Nino is stronger than the last major event of its type in 1997. According to...