“In a sign of increasing unrest that continues to unfold across Europe, Muslims have brought their wars from the middle east to Europes doorstep.  Turks and Kurds have taken to the streets of Sweden to fight one another, with makeshift explosive devices, and an outpouring of physical violence.

Last Thursday it was Germany’s turn, when Frankfurt police had to intervene in clashes between Turkish nationalists and Kurdish separatists.

Now immigrants from both sides of that battle are carrying their fight onto the streets of Frankfurt.

Meanwhile, Germany will mobilise 4,000 soldiers in the next 48-hours to help with the entry of up to 40,000 refugees in the country.

“Kurds and Turks went to war on the street of Europe once again today. A group of Kurdish independence supporters leaving a rally in the Swiss town of Bern were rammed by a car allegedly driven by a supporter of Turkish nationalism. Two are thought to have died, with twenty injured.

Europe already becoming a cesspool Islamic hellhole from Islamic immigration. Next year who knows what Europe will look like. 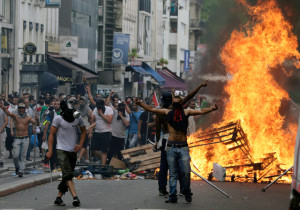 When Donald Trump said complete idiots are running this country, he is 100% correct. Earlier today, US Central Command Gen....