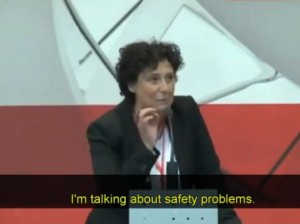 German politicians were elected to represent the German people, they have failed and instead have put foreigners interest first. The situation in Munich is dire, Munich has been inundated with refugees, with 13,000 arriving last Saturday alone, followed by another 6,000 people by Sunday afternoon. He said he expected an additional 4,000 people to arrive by day’s end.

Local governments have proved unable to cope with the large numbers. Now, they want Merkel to provide more support and pick up the bill.

On September 15, Brigitte Meier, Commissioner for Social Affairs in Munich, spoke at a meeting of the SPD (Social-Democratic Party of Germany) in Berlin about the “refugee” crisis in her city. She told the audience that Munich had reached the limit of what it could cope with, and unless the government could open up a rail hub further up the line, so that refugees could be transferred onwards, her city would be facing a humanitarian catastrophe.

0:00 We urgently need a hub,
0:04 and when the borders are possibly be opened this weekend,
0:08 you have to imagine what this means for Munich.
0:12 The Wies’n (Oktoberfest) begins. This cannot
0:16 be handled at the main station any more in a safety-related way.
0:20 7 million, 7 million … No, I’m talking about safety problems.
0:24 I’m talking about safety problems.
0:28 We can’t cope with that any more at the main station.
0:32 We can… We must direct the trains… We have to!
0:36 During the last 14 days, we had
0:40 55,000 arrivals at the main station in Munich.
0:44 55,000!
0:48 And we couldn’t send the trains any further.
0:52 You have refused the allocation plan
0:56 except for Lower Saxony and North Rhine-Westphalia. Thank you!
1:04 And if the borders are to be opened now,
1:08 and we’re not able to direct the trains further,
1:12 we cannot guarantee the safety of Munich any longer.
1:16 Where is the hub? Where is the hub?
1:20 For 14 days we’ve been saying, we need the next hub.
1:24 There is still none. And I don’t know how you imagine that.
1:28 It’s not about the Oktoberfest. It’s fundamentally about safety.
1:32 And the mood in Munich will shift then.
1:36 The helpfulness is tremendous, but if we’re not able to…
1:40 and we’re no longer talking about an emergency situation.
1:44 Last Friday we debated within the task force of the ministry for social affairs
1:48 about proclaiming a disaster situation.,
1:52 which happens in case of a flood. This wouldn’t have made a difference,
1:56 as we have already mobilized all emergency services in Bavaria.
2:00 The proclamation would have given us two more days breathing space.
2:04 We probably had been issued tents for two more days,
2:08 and maybe beds, but nothing else.
2:12 So, even the proclamation of a disaster situation
2:16 doesn’t help us in Munich. And that’s why we are so impatient,
2:20 for we have the impression that the Southern Bavarian situation…
2:24 and that’s not a party political matter, but it’s a matter of recognizing
2:28 what takes place at those borders
2:32 in Passau, in Rosenheim and in Munich.
2:36 And I ask you to pay a visit. I know what you undergo. I know.
2:40 I’ve got that normal business, too, as we usually
2:44 have to accommodate 500 refugees each week.
2:48 It’s true, and I know all that, but the situation in the south
2:52 of the republic soon won’t be manageable
2:56 regarding safety.
3:00 Now, one last thing. This weekend, we already wanted to open the Olympic Hall
3:04 on Saturday. We couldn’t open the Olympic Hall on Saturday,
3:08 for we didn’t know how. Beds… Beds…
3:12 We asked via twitter for air mattresses and thermal mats
3:16 to give those people, one thousand people, a place to sleep.
3:20 So, with help from volunteers from Munich,
3:24 we moved 1000 thermal mats and blankets
3:28 into the Olympic Hall.
3:32 The emergency services at their limits — as I said, disaster mode.
3:36 But I couldn’t open the Olympic Hall, as I didn’t know with which personnel.
3:40 THW (Technical assistance), BRK (Bavarian Red Cross)…
3:44 All refused, saying: “We can’t go on any longer.
3:48 We’re running on empty.” I would have opened the Olympic Hall
3:52 with the mountain infantry of the army,
3:56 fifty soldiers, lead by my social education workers,
4:00 as this would have been service within the army. So the
4:04 social services department would have told the soldiers
4:08 how to run a facility. That is the mode in Bavaria — everywhere.
4:12 In Rosenheim, Passau, Munich.

Russia is not the enemy

By Stephen Kinzer REAL ENEMIES ARE a threat to any country, but imagined enemies can be even more dangerous. They...