The Syrian refugee who tripped by a Hungarian reporter, Osama Abdul Mohsen, is a terrorist of the part of the al-Nusra terrorist organization, a major terror group. And now he is in Spain being treated like a rockstar. According to the report:

The Syrian refugee who was tripped by a Hungarian camerawoman earlier this month was a member of the radical al-Nusra Front and fought the Kurds on many fronts in Syria, the Democratic Union Party (PYD) said Saturday.

The video footage of Osama Abdul Mohsen being kicked by a camerawoman on the Hungary-Serbia border went viral and prompted uproar around the world.

Abdul Mohsen later landed in Spain where he was offered a job and welcomed by Real Madrid football club including famous footballer Cristiano Ronaldo.

However, the Kurdish group PYD alleged in its official media that Abdul Mohsen had fought alongside the Nusra Front before leaving Syria with his family in the spring of 2015.

Furthermore, the PYD claimed that Abdul Mohsen was involved in the violent suppression of Kurdish riots in the city of Qamishlo in 2004 following a football match were more than 50 Kurds were killed by the Syrian security forces.

The PYD said that he was an instigator behind the violence after the football match between al-Fatwa and Qamishlo’s Jihad club.

The PYD published a picture of Abdul Mohsen from his Facebook page before closing it down earlier this year where he identifies himself as a member of the Nusra Front, adding that he had fought the Kurds near Amudeh, Serekaniye and Afrin.

Why is this psychopath welcomed to Spain? Spain needs to take in the Christians! 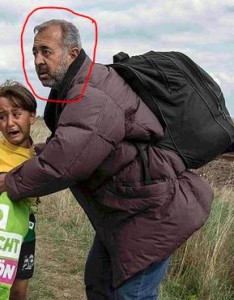 Endgame: Putin Plans To Strike ISIS With Or Without The U.S.

On Sunday, we noted that Washington’s strategy in Syria has now officially unravelled. John Kerry, speaking from London following talks...