(conservativepapers.com) THE European Union has lost control of its borders and risks total collapse if they are not sealed, Donald Tusk, president of the European Council, warned.

RISING tensions between central and east European countries over the escalating migrant crisis could be the spark for a catastrophic WORLD WAR, experts warned today.

The Yugoslav Wars conflicts fought from 1991 to 2001 inside the territory of the former Yugoslavia two of the countries are known today as Croatia and Serbia.

Tensions over the refugee crisis in these two countries is entering dangerous territory and the aftermath of the war that just ended 14 years are still present in bullet holes in building and mines still in may of the outlying areas.

Both countries are trying to push the immigrants onto the other, neither want them as they have their own poverty and problems to deal with.

They are facing a “critical point” and that the migrant crisis is now causing the 14 years of peace to be question if all out wars will start in Europe in the coming months.

This week Croatian border police have blocked Serbian citizens from entering their country as the feud over the migrant crisis between the two nations reaches a breaking point.

Croatia is blocking Serbian citizens and cars from entering, and Serbia has banned any Croatian cargo traffic in the growing dispute over the influx of refugees crossing the shared border.

Croatia just released the memo that “Serbian passport holders and cars registered in the country will be unable to enter Croatia until further notice”.

Tensions were already high after Croatia believed Serbia was directing the flow of migrants coming through the Balkan peninsula over their joint border.

More than 40,000 migrants have crossed from Serbia to Croatia since Tuesday.

Croatia has banned all lorries but those carrying perishable goods from entering the country from Serbia and shut seven of eight road border crossings, arguing that Serbia should direct refugees to Hungary and Romania too.

Both Serbia and Croatia were part of communist Yugoslavia but Croatia broke away in 1991 and fought a war against Serbia until 1995. Croatia joined the EU in 2013, and Serbia wanted to follow suit but is not having second options after the refugee crisis.

Minister Zoran Milanovic said “There will be no war or violence”.

There are already fears of an international conflict due to the migrant crisis.

Hungary and Serbia have also been at each others’ throats over the issue, with Budapest urging its non-EU neighbours to do more to help tackle the growing neighbours migrants.

It the Hungarian officials are sending troops armed to protect its borders.

The escalating situation on the continent has also drawn interest across the Atlantic Ocean.

Gerald Celente, who is a trend forecaster in the United States, said the current crisis draws huge parallels with a previous global conflict – in this case the Second World War.

He said: “We’re on the march to war. History is repeating itself. 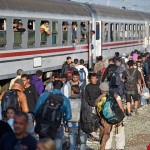 “We’ve got the panic of ’08, the Great Recession, currency wars, trade wars and now we’re seeing the refugees of war sweeping on the shores of Europe.”

He said another big terror attack on society will see an emotional outpouring across the Western world that will then transform into a catastrophic thirst for revenge.

Mr Celente said: “They are leading us to the next great war. All it is going to take is a terror attack and people will be tying yellow ribbons around everything that doesn’t move, waving American flags and we’re off to what Einstein called the whole war scenario.”

In Case You Missed It:  Abortion isn’t “reproductive health,” it’s the MURDER of an individual human being
Posted in Freedoms and tagged Croatia, Europe, Immigration, Serbia, War.

Preparation for mass during a papal visit takes water, flour, and the dedication of a group of Pennsylvania nuns hard...