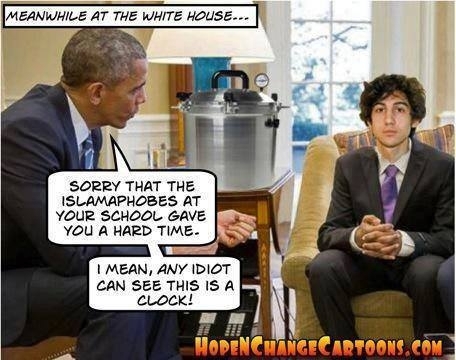 In just over a week, the Ahmed Mohamed clock controversy has become a global phenomenon: the young man brought a homemade clock to school and was subsequently arrested because school officials thought it looked like a bomb, leading to a worldwide outcry and hundreds of thousands of tweets, articles, and words of praise for the boy from Irving, Texas.

Ahmed has received commendation from the likes of Google, Facebook, Twitter, and even the president of the United States. Just recently, his family announced they will meet dignitaries at the United Nations; later, after a jaunt to Mecca in Saudi Arabia, they hope to meet with President Obama.

Mohamed has become an international superstar. But there are nonetheless several puzzling and troubling questions regarding his rise to fame. A great many people who have been mildly skeptical of this story have been denounced as “Ahmed truthers” and as people who are out to conduct a “smear campaign” against an innocent boy. But it’s actually reasonable and even necessary to be a bit skeptical of extraordinary stories such as this. You don’t have to have a vendetta against Ahmed to want the full story on the table, and asking honest questions about such a remarkable news event doesn’t mean you’re out to “smear” this young man.

With that in mind, here are six questions the media should be asking the Mohamed family to clarify some points that badly need it.

1. Why did Ahmed claim to build the clock if he didn’t actually build it?

From the beginning we’ve been told that Ahmed—a supposedly creative, clever, inventive young man—threw the clock together from parts in his bedroom in order to “impress” his teachers at school. Ahmed told Chris Hayes he put it together himself. He told the Dallas Morning News that he “made a clock,” elsewhere claimed “I’m the person who built a clock and got in trouble with it,” and claimed that the clock was “[his] invention.”

As it turns out, it’s almost certain he did no such thing. All the evidence points toward the conclusion that Ahmed didn’t build his clock at all, and instead just took apart an old digital clock and put the guts inside a pencil case. If this is true—and it almost certainly is—why did he claim he “built” such a device?

Photographs and videos of his workshop have shown a bench scattered with circuit boards, wires, and other electronic devices. If Ahmed is used to working in such conditions and with the guts and pieces of such technology, he should know the difference between “building” a clock and not building one. So what led him to claim he built something that, for all appearances, he didn’t?

2. At what point was the clock actually built?

From the first report of Ahmed’s arrest, we learn the boy threw the clock together “in about 20 minutes before bedtime on Sunday.” He subsequently took it to school the following Monday morning, at which point it was confiscated. He thus had the clock in his possession for around 12 hours, give or take.

Elsewhere, however, his father claimed that Ahmed “wakes up with [the alarm clock] most mornings.” This simply cannot be true: Ahmed allegedly only had the alarm clock for one morning. Perhaps the explanation is that Ahmed used to wake up with the original alarm clock before he disassembled it and put it in the pencil case, and his father was simply not speaking clearly. Pretty satisfactory explanation, right?

Not so fast. On MSNBC with Chris Hayes, Ahmed claimed to have “bought [the clock’s] parts and put it together in [his] room.” These stories do not jibe. At what point did Ahmed build the clock—and if he built it before the Sunday night in question, why did he lie about it?

3. Why did the clock go off during his English class?

When Ahmed showed the clock to one teacher, that teacher said he should not show it to anyone else (the teacher apparently thought it looked suspicious). One assumes he intended to follow that order and keep quiet about the clock for the rest of the day—but, according to NBC News, “the clock’s alarm went off during [another] class,” annoying another teacher and leading Ahmed to show her the clock after class in order to explain himself (this teacher subsequently reported him, which led to his arrest).

So the alarm went off and the teacher heard it. That’s a suitable pretext for showing her the clock, but it’s also—when you stop to think about it—really quite odd. Why was the alarm ringing in the middle of the class? Did Ahmed program it to ring while he was in the classroom? If so, why?

There might be and probably is a perfectly reasonable explanation for why the alarm went off. But all the reports I’ve read just claim the alarm “went off.” Alarm clocks don’t just go off: they are programmed to go off (clocks generally don’t just arbitrarily ring on their own; otherwise they’d wake people up all night long). Has anyone asked Ahmed why the clock was programmed to ring during his English class?

4. To what extent has Ahmed’s sister, Eyman, been involved in the whole affair?

We know from a Daily Beast report that Ahmed’s sister, Eyman, was suspended in middle school due to “this girl saying [Eyman] wanted to blow up the school.” She appears to still be fairly bitter about it, even all these years later, which is sort of understandable. She and Ahmed’s other sister created the @IStandWithAhmed Twitter account a couple of days after Ahmed was arrested.

But there is evidence Eyman has taken an even more proactive role in the whole affair. Mark Cuban claimed to have spoken with Ahmed on the phone and said his sister was “over his shoulder, you could hear, listening to the question, giving him the answer.” Ahmed is still a young man, but he is not a toddler, and is surely capable of answering questions. Why would Eyman feel it was necessary to instruct Ahmed on what to say? Has she played a larger role in this controversy then we’ve already seen?

5. Why did Ahmed assume the clock would look ‘suspicious’ or ‘like a threat’?

Ahmed claims that he used a cable to close the pencil case because he didn’t “want to make it seem like a threat” or “suspicious.” Why did he assume it would look that way? Did he believe it was suspicious-looking when he built it, and if so, why did he take it to school with him?

6. Why is the Mohamed family blocking the release of important records?

Irving Mayor Beth Van Duyne revealed this week that the Mohamed family is refusing to release records that could exonerate the police officers who handled Ahmed’s arrest. Both the Irving School District and the Irving Police Department have asked for the records to be released, but to no avail. Why would the Mohamed family feel it necessary to prevent such records from being released to the public?

All of these questions may have perfectly reasonable and unsurprising answers. But before we can get the answers, the media must ask the questions. Before this incident goes any further, members of the press should be asking the Mohamed family to clear up these uncertain and confusing gaps in the story.

Video: “Why immigration from the Third World makes no sense”

A very interesting and educational video about immigration and poverty. Conclusion: the only logical way to help poor people in...