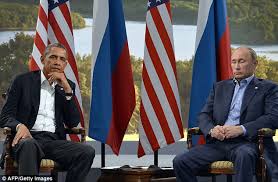 The Russian President Vladimar Putin has moved swiftly to seize control of the Middle East, as the Obama Regime’s catastrophic and disastrous Foreign Policy continues to self destruct in the Levant one brick at a time, Obama’s naive and dysfunctional foreign policy advisers have been out thought and out fought at every step of the game, as Putin and his Foreign Minister Lavrov have moved nimbly to secure and entrench Russian Hegemony over the entire Middle East, backed up all the way by their main ally China.

The litany of Russian Conquests grows steadily by the day, Putin fresh from his audacious annexation of Crimea and imperialistic advances into the Ukraine, has now moved significant military and naval hardware and forces into Syria to ensure the survival of his Syrian Proxy Leader Bashar Assad, and strengthen and reinforce his threshold nuclear armed counter force Iran, and their terrorist surrogates Hezbollah, to form a Russian/Chinese/Iranian/Hezbollah Ring of Fire around Israel and the Gulf States.

Coordinating all this sudden Russian/Chinese incursion into the Middle East through an Intelligence and Security Nerve Center in Iraq, which grants Putin and Xia total mastery of land, air and naval supremacy in all the war zones and crucial strategic waterways, heights and passes in Iraq, Syria, Iran, Israel and the Gulf States.

The implications for Israel are enormous, and the decline of American and Western influence in the Middle East under Obama is both profound and irreversible.

In Case You Missed It:  Op-Ed Bias: Are All Opinions Created Equal?
Posted in Freedoms.