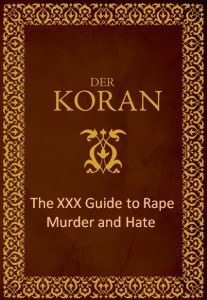 After Muslim terrorist attacks, we’re told that the killers just “misunderstood” their religion. They misunderstood the peaceful nature of Koranic verses such as “Kill them wherever you find them”, “They should be murdered or crucified or their hands and their feet should be cut off on opposite sides” and “Strike off their heads and strike off every fingertip of them”.

But the misunderstandings of Islam are just getting started.

The principal of Wilhelm-Diess-Gymnasium was concerned about his female students. So he sent a letter warning their parents that the Muslim refugees who had been put up next to the school gym “are marked by their own culture”. And now Germans were being “marked” by their culture.

The Koran states, “O Prophet! Tell your wives and your daughters and the women of the believers to draw their cloaks all over their bodies that they may thus be distinguished and not molested.”

The obvious implication is that women who aren’t dressed in a Burka may be “molested”.

Or as the commentary states, “It is more likely that this way they may be recognized (as pious, free women), and may not be hurt (considered by mistake as roving slave girls.)”

The Muslim migrants who have invaded Germany just might “misunderstand” and mistake the teen girls going to the gym as “roving slave girls”. And under Islamic law, that’s what they are. Islamic law permits Muslim men to rape even married infidel women in the Dar al-Harb. Let alone unaccompanied girls.

Unfortunately the misunderstandings are well underway in Germany. A letter about an asylum camp in Germany warns of a “culture of rape and violence” with “numerous rapes, sexual assaults” and “forced prostitution”. Even though the women in the camp are likely to be mostly fellow Muslims, who are well acquainted with the means of avoiding “misunderstandings” with a Muslim man (wear a hijab, wear a burka, never make eye contact, never smile), the misunderstandings still keep taking place.

On a large scale.

Because there was never any misunderstanding. As the letter points out, these men “regard women as their inferiors and treat unaccompanied women as ‘fair game’”.

The misunderstanding here isn’t on the part of the Muslim men who view women as fair game. When a mugger snatches a purse or a burglar breaks into a home, he isn’t the victim of a “misunderstanding”.

He just happens to have a different ethical code than the society he is victimizing. But these rapists are members of a society where rape is a crime for a woman, not for a man. The only misunderstanding here is on the part of the Westerners who allowed them in to commit their cultural crimes.

Muslim sexual offenders have used “misunderstandings” due to “cultural differences” as their defense.

The Pakistani rapists who went after eighteen women and girls claimed that they could rape a girl because “she was not related to us” and “she was not wearing any headscarf”. Their Grand Mufti agreed, saying, “It’s 90 per cent the women’s responsibility.”

“If you take uncovered meat and put it on the street, on the pavement, in a garden, in a park or in the backyard, without a cover and the cats eat it, is it the fault of the cat or the uncovered meat?” the Grand Mufti asked. “The uncovered meat is the problem.”

But if you get rid of the feral cats that show up in civilized countries, scratching at the door to be let in, the problem goes away. If the Grand Mufti and his favorite rapists were picked up by animal control, put in the pound, neutered and then released back into the wild that they came from, that would be it.

Germany has decided to take in huge numbers of Muslim men who come from a religion and culture where a woman who isn’t wearing a Hijab and isn’t escorted by a man can be raped.

And that leads to “misunderstandings” between the invaders and the native population.

In the UK, these “misunderstandings” have already led to over 2,000 children being victimized by the Muslim “misunderstanders” of such finer points of British law as the definition of pedophilia.

As Gatestone’s Soeren Kern documents, the tide of “misunderstandings” has reached Germany. A 16-year-old girl was raped on September 11 by an unidentified “dark-skinned man speaking broken German” near a refugee shelter. Parents were told not to let their children out unaccompanied.

This is just one of a long list of Muslim “misunderstandings” that have already taken place in Germany.

That last “misunderstanding” happened in the Park of the Victims of Fascism where the misunderstander lured the little girl away from her mother at the playground and into the bushes. It was a cultural difference. Her age was the same as that of Aisha, Mohammed’s wife.

In the Park of the Victims of Fascism, the little girl became the victim of the latest incarnation of fascism; Islamofascism.

The “refugees” are mostly migrants. They are not coming to be part of any country, but to exploit it and then conquer it and rule it. They are not bound by any moral or ethical code that we understand.

Their advocates talk about “human rights”, but in Muslim culture there is no such thing as human rights. Their cultures are tribal. There are no universal rights, only responsibilities to members of kin groups. When those kin groups remain intact, then members will prey exclusively on outsiders. When they fall apart, as they do during immigration and migration, then mass rapes and murders take place.

This is the underlying “misunderstanding” and this is what must be understood. Either Europe will end Muslim migration or surrender to the cultural difference of an Islamic society in which women are not allowed to walk the streets because they are property.

It’s time to clear up these misunderstandings.

Europe can either have free women, bars, churches, synagogues, cartoons, free speech, pork sausage and beer. Or it can have millions of Muslim migrants and their wide-eyed toddlers.

It can’t have both. Not for long. Because there will be “misunderstandings”.

Until finally the only way to end all these “misunderstandings” will be a submission to the Islamic State. We may finally understand then, but it will be too late.

Muslim migrants don’t misunderstand our laws or values. They don’t care about them. We misunderstand theirs. And so we do our best to accommodate their contempt for our values.

It’s time that we understood this cycle of submission and showed the invaders that they misunderstood our generosity as appeasement, our friendliness as weakness and our tolerance as surrender.

And then we can finally bring all these “misunderstandings” to an end.

BY ROBERT SPENCER Why did the Muslims torch the monastery? Were the monks drawing cartoons of Muhammad? Did they “talk...