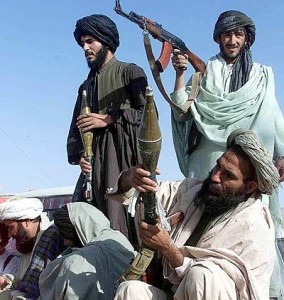 At just about the same time the news media swooned over President Barack Obama’s speech at the United Nations on Monday, hundreds of Islamist terrorists from the group the President boasted about was on the decline during a bloody ambush that recaptured the city of Kunduz in northern Afghanistan.

The members of the Afghan Taliban, who were said to be experiencing a decline in their power, are now in control of a major city for the first time since 2001 when the United States launched its retaliatory invasion against Osama bin Laden and his al-Qaida group and against the ruling Taliban who allowed bin Laden to use their country as a stronghold.

Meanwhile, at the U.N. Obama told the general assembly, “We are called upon to offer a different type of leadership. Leadership strong enough to recognize that nations share common interests, and people share a common humanity.” Which, to many listeners, is a common Obama flourish that upon examination means nothing.

According to Benjamin Delacruz, a former police-commando training officer, the Afghan security forces, city police and Afghan intelligence agencies claim they are in shock over this costly failure of security and intelligence to protect the Afghan people and their property.

The invasion and occupation of Kunduz by the radical Islamic fighters is being called a large-scale setback for the Afghan government in the days following U.S. and NATO troops taking a backseat in anti-terrorism operations.

The Afghan military high-command in Kandahar are telling the people that reinforcements are on their way to Kunduz.  According to Martin “Marty” Brenner, a former police counterterrorism unit sergeant, “I’m being told by colleagues still working for the government that the jihadists dispatched hundreds of heavily armed fighters into Kunduz where they killed and wounded untold hundreds of military and law enforcement officers and quickly commandeered government buildings and prisons freeing hundreds of prisoners, many of whom are convicted jihadists.

The international healthcare charity, Doctors without Borders, who are active in Afghanistan and other war zones in the Middle East, Africa and Asia reported to the news media that it’s medical staff has treated close to 200 wounded victims in Kunduz. Another 40 or so have been listed as being in critical condition. Most of them suffered from head wounds.

The Taliban announced their victory on social media websites such as Twitter and Facebook, but their messages of the “conquest” of Kunduz were taken off the Internet by intelligence agents. Both the Afghan and Pakistani Taliban have a history of merciless violence, and are known for their hostile treatment of women and children. Recently, a U.S. Army Green Beret was discharged for “roughing up” an Afghan police commander when it came to the Green Beret’s attention the cop had sexually assaulted a young boy.

According to Gen. Murad Ali Murad, the Army’s Vice-Chief of Staff, Monday’s attack force was drawn from Taliban members in the north and there were allegedly a sizable number of foreign fighters. Besides the Taliban and the remnants of “core” al-Qaida, members of the Islamic State of Iraq and Syria (ISIS) are competing with the Taliban for notoriety.

Also, U.S Rep. Mac Thornberry, R-Texas, Chairman of the House Armed Services Committee, made the following statement on the Taliban taking control of the Afghan city of Kunduz: “News reports that the Taliban has retaken Kunduz are discouraging, but not unexpected.  President Obama’s failure to fully resource his strategy for Afghanistan forces our troops and their leaders to focus on meeting next year’s withdrawal deadline, rather than America’s security needs.”

“The fall of Kunduz to the Taliban is not unlike the fall of Iraqi provinces to ISIL—it is a reaffirmation that precipitous withdrawal leaves key allies and territory vulnerable to the very terrorists we’ve fought so long to defeat. Next month, General Campbell will testify before the Armed Services Committee.  I look forward to his assessment of how American and Afghan security can be enhanced if his forces are allowed to stay beyond the end of 2016,” said the Congressman.

In Case You Missed It:  “Thank You Will Smith!” – Radical Democrat Ayanna Pressley Cheers Will Smith’s Violent Assault at Academy Awards Over a Joke
Posted in Terrorism, Tyranny and tagged Obama, Taliban, Terrorism, United Nations.

Cecile Richards, the president of Planned Parenthood, testified that she was unaware that unborn children can sometimes survive abortion attempts...