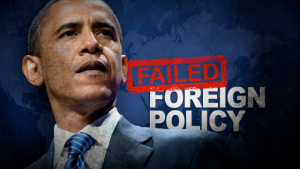 President Obama delivered his annual speech to the United Nations General Assembly on September 28th.  He spoke mostly in generalities, with his usual platitudes extolling the benefits of multilateral cooperation, diplomacy and international law rooted in what he called “universal,” “self-evident” truths.  He condemned “the belief that power is a zero-sum game; that might makes right; that strong states must impose their will on weaker ones; that the rights of individuals don’t matter; and that in a time of rapid change, order must be imposed by force.”

President Obama’s main examples in his speech of countries that “assert themselves in ways that contravene international law” were Russia and Syria. In both cases, unfortunately, Obama’s feckless foreign policy has made matters worse.

“Russia’s annexation of Crimea and further aggression in eastern Ukraine” had to be met with consequences from the international community, Obama said. However, Russia’s actions did not foreshadow a resurgent Russia, he claimed.

The truth is that Russia is resurging as U.S. power and influence have whittled away on Obama’s watch. Ironically, on the very same day as Obama’s speech, it was reported in the New York Times that “For the second time this month, Russia moved to expand its political and military influence in the Syria conflict and left the United States scrambling.” Following its earlier military build-up to support Syrian President Bashar al-Assad’s regime, Russia has just announced an accord with Syria, Iran and our ostensible ally Iraq to share intelligence in a common fight against ISIS.

Russian President Vladimir Putin is a strategist while President Obama cannot see the forest for the trees. Obama insists on a “managed transition away from Assad and to a new leader,” without any more of an idea of what would follow to stabilize the country than Obama had when he decided to back the forceful removal of Libya’s Muammar Gaddafi from power. Assad is a terrible man to be sure, responsible for many thousands of brutal killings and mass displacements of his people, but he has never posed the level of threat to the security of our nation and to the lives of our citizens as ISIS and its other jihadist brethren do.

The problem was that Obama never backed up his bellicose words with action. His red line in Syria simply disappeared

True, Obama did not ignore ISIS in his speech. He said that “when a terrorist group beheads captives, slaughters the innocent and enslaves women, that’s not a single nation’s national security problem—that is an assault on all humanity.” However, he still shied away from properly identifying who these barbarians are – Islamic jihadists. He said they have a “poisonous ideology,” but glossed over the fact that the source of this ideology lies in the doctrines of Islamic supremacy and jihad that are intrinsic to the Koran and sharia law.

In a show of “determination to ensure that there will never be a safe haven for terrorists who carry out these crimes,” Obama declared that “the United States makes no apologies for using our military, as part of a broad coalition, to go after them.”  In truth, however, his administration’s efforts to date against ISIS have been pitifully inadequate. By its own admission, the Obama administration has spent many millions of dollars to put four or five fighters on the ground in Syria from the more than 50 who were trained as part of a U.S. program. Meanwhile, ISIS continues to recruit many thousands more jihadists to its ranks.

President Obama did not wait very long in his speech to boast that, after two years of “complex” negotiations, the United States “and our partners—including Russia, including China” achieved “a lasting, comprehensive deal that prevents Iran from obtaining a nuclear weapon.” The truth is that even if Iran complies with its commitments the deal legitimates Iran’s development or acquisition in eight years of missiles designed to deliver nuclear weapons and paves the way for Iran to produce enough enriched material to very quickly make a nuclear bomb a few years after that. Meanwhile, Russia’s S-300 missile sale to Iran is going forward despite the UN arms and missile embargoes currently in place. The Obama administration stands helpless in the face of violations of these embargoes by its “partner” Russia, much less Iran.

In Case You Missed It:  Does Anyone Have the Balls to Indict Obama?

President Obama used a part of his General Assembly speech to take a veiled shot at his political adversaries at home. Obama said that the United States was not immune to “greater polarization” and “a politics of us versus them.” Just as he did during the domestic debate over his nuclear deal, Obama set up a strawman. Worrying about the intentions of our enemies – or even considering them enemies at all – is tantamount to a war mentality and is outdated in his worldview. Obama’s bottom line is that those who are skeptical about his naïve view of the world believe only in military solutions and reject diplomacy:

“Even as our economy is growing and our troops have largely returned from Iraq and Afghanistan, we see in our debates about America’s role in the world a notion of strength that is defined by opposition to old enemies, perceived adversaries, a rising China, or a resurgent Russia; a revolutionary Iran, or an Islam that is incompatible with peace. We see an argument made that the only strength that matters for the United States is bellicose words and shows of military force; that cooperation and diplomacy will not work.”

Never mind that we do face enemies who mean to do us harm. “Death to America” chanted by Iranians, right up to Ayatollah Khamenei himself, is not a figment of our imagination. Islamic jihad, whether accomplished through violence or stealth means of infiltrating our institutions, is going on whether Obama believes it or not. And never mind that President Obama was not averse to using bellicose words himself in demanding that Assad had to go and in threatening to bomb Syria if the Assad regime used chemical weapons against its civilian population. The problem was that Obama never backed up his bellicose words with action. His red line in Syria simply disappeared.

In Case You Missed It:  Principal files $5M lawsuit On Ann Arbor schools that discriminates against whites

“Shows of military force” and “diplomacy” are not incompatible, as Obama seems to believe. It is possible to engage in smart diplomacy while advocating a strong military to back up such diplomacy. Call it “peace through strength,” as Ronald Reagan did, or “speak softly and carry a big stick,” as Theodore Roosevelt did. As President Obama’s speech at the United Nations demonstrated once again, his whole approach to foreign policy has turned this long-standing, common sense strategy on its head.