“Berlin – A food queue fight in an overcrowded German refugee centre this week escalated into a mass brawl pitting 70 Pakistanis against 300 Albanians, fighting with fists, sticks and pepper spray.” 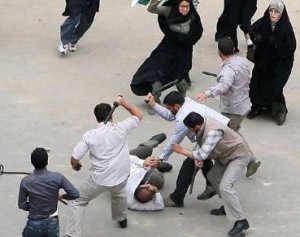 “Germany’s police union Tuesday called for refugees to be separated by religion — especially between Christians and Muslims — and by country of origin, to minimise the potential for conflict.”…

“Groups banding together by ethnicity, creed or clan were “attacking each other with knives and homemade weapons,” said union chief Rainer Wendt, calling for special protection for Christians, women and minors.

By the time it ended, 14 people were injured, including three of the 50 police called in to contain the riot in a former airport building housing 1,500 asylum-seekers from 20 nations near the central city of Kassel.

Burly security guards stood outside this week, checking the IDs of anyone walking in or out, next to a sign reading “no photography”.

The so called refugees waiting no time to start making demands and rapes in the cities increased as soon as the mass of refugees entered, these refugees are barbarians!

So far the massive immigration to Germany in the past few months has caused a serious situation in Europe, refugees making demands, fights, rapes, crimes are up,  European countries are fighting among each-other, the situation is perilous and could be the start of the end of the European Union!

Manfred Gerstenfeld With the election of Jeremy Corbyn as leader of the British Labour party the anti-Israeli incitement by European...