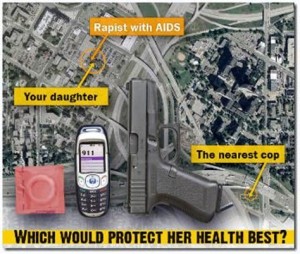 A gun-free zone is insanity personified! Only a deranged fool would suggest such a policy in our brutal, bloody, and barbaric society. Shooters may be vicious killers but they are not stupid. Since they want public attention they try to get more bang for their buck as they “make their statement” during a shooting. It is only logical that they will shoot up areas where there are no guns! Is that difficult for liberals to understand? Why make it easier for killers to kill?

I believe that school shootings, such as this week’s slaughter at an Oregon college, would disappear if everyone knew that each school had a few people who were armed and considered dangerous (to the bad guys), and willing to defend the defenseless. The answer to mass shootings is more guns in the hands of good people.

Guns are not the problem. People are. There are evil people among us. Pathetic pundits pontificate profusely proposing that vicious killers have to be sick–and some may be; however, most of them are simply evil. They do evil things because they are evil people.

We are living with generations of youth that have been dumbed down by public schools and emasculated of character (in home and church); devoid of purpose and without goals other than to satisfy immediate urges. They don’t understand that the urge of the moment will become the scourge of a lifetime: they distain education and live on welfare for a lifetime often with their posterity following them on the same destructive path. They satisfy sexual urges like barnyard animals and produce bastard babies that are themselves programmed for failure. These lost generations don’t seem to be able to connect the dots: light a match to gas and expect an explosion; pull the pin of a hand grenade and expect a blast; rock a canoe and it will turn over; jump from a high building and expect to fall–and hit hard. Actions produce consequences, often bad consequences.

Liberals removed God from the schools: no prayer, no Bible reading, no Ten Commandments, no teaching based upon the Bible. No speaking of Christ. After all, kids might really take those teachings to heart. They may decide not to lie, steal, fornicate, rape, and kill! They might honor and obey their parents, the law, and school officials. They might become kind, gracious, fair, honest, and principled! Heavens, we can’t have that can we? After all, progressives demanded a secular society. Well, we have it and our schools have become ignorance factories, sex clinics, self-esteem laboratories, sports clubs–and killing fields. Furthermore, homes have become poorly run bed and breakfasts and our churches have become unprincipled, unbiblical, and unnecessary social clubs.

I am weary of hearing radical leftists whine about how guns are corrupting young people (but the violent and sexual Hollywood movies aren’t bad!)

I am weary of hearing radical leftists whine about how guns are corrupting young people (but the violent and sexual Hollywood movies aren’t bad!) and are a deadly threat to all our citizens especially those in schools. However, guns are inanimate while people are initiators so the problem is not with guns but with people. Anti-gun parents are horrified to see their small children playing with guns and “shooting” each other. Has the world gone insane? Most of us grew up “shooting” other kids. I “shot” them with wooden guns, cap pistols, sticks and even my finger! Never once did I consider getting my dad’s shotgun or .38 revolver and really shoot anyone.

I believe the world has gone nuts. Don’t the “experts” know that girls enjoy playing house with dolls and miniature furniture and boys like to be more aggressive and play with guns? Males are more aggressive because of their God-given nature as a protector of the family. Kids should grow up with knowledge of guns and have experience in handling them.  For sure, gun training is far more valuable than most of the fluff classes in most schools.

I am weary of gutless politicians, even “conservative” Republicans who are so uninformed or so desire liberal approval that they cannot defend guns and the use of force when necessary to protect the innocent and helpless.

The Second Amendment is there to protect us against the tyranny of government. Our founding fathers were well aware of government’s propensity to evolve into tyranny and they knew a well- armed citizenry mitigated against that possibility. Politicians don’t just hate guns but they hate and fear guns in the hands of an aroused citizenry.

As knees begin to jerk all across America (left ones, of course) let me make it clear that I am saying what our founding fathers knew might someday be required: that our government might someday become so despotic that citizens must do again what they did in the 1700s! Yes, it could be that Americans might have to defend themselves against their government and that could only be possible if those Americans are armed! That is the reason that non-principled politicians whine constantly about controlling guns.

Guns are not evil and only a flunky, fool, or fanatic says they are. In fact, guns are used over two and a half million times per year by honest citizens to protect themselves against criminals determined to do them harm! Armed citizens kill about 3000 criminals each year while the police kill about 1000.

I have never heard a gun controller (read: confiscator) tell me what they will do about the bad guys out there who will continue to have their guns when supine Americans are browbeaten into surrendering theirs. Does any sane person think the criminals will register or surrender their weapons? Since the police show up after a crime, the citizen must protect his own family?

I would like to see more guns in the hands of honest citizens! When good guys are armed the bad guys will be a little slower to act out their hostility. When a shooting took place in a Mississippi school a few years ago, the assistant principle ran to his car, grabbed his gun (good thing the gun-grabbers didn’t get there first) and stopped a massacre. He should be commended, not criticized!

Now, a question for the gun-grabbers: Would it not have been desirable for one of the teachers in Oregon to pull his or her gun and drop the killer before so many innocent victims were killed? I wait for an answer.

All sane, sensible people would agree that fewer deaths would be preferable, but no one says the gun-grabbers are sane, sensible people. At least, I don’t. They are fallacious, frivolous, fruity, foggy, fluttery, flimflamming, feverish, frightful, frenzied, fraudulent, foolish fascists. For those educated in public schools, I am saying that gun-grabbers are irresponsible, dishonest fanatics.

If common sense is ever resuscitated, guns will be prevalent in the schools and those determined to do harm to innocent ones will be blown away before they blow away helpless people. Start awarding gun permits to teachers and school officials before more innocent kids are killed! We need more guns in schools and society, not fewer!

In Case You Missed It:  RON PAUL: What We’re Facing Today Is ‘A Lot Worse’ Than The Depression (VIDEO)
Posted in Freedoms and tagged Constitution, Freedom, US Citizen.

A dramatic video posted to YouTube on Wednesday allegedly shows Russian planes striking a post of Tajamu al-Izza from the...