Following the invasion of Poland, Hitler’s plan to punish the country, in addition to labor conscription and shipment of food to Germany, included shipping in Gypsies and communists literally by the trainload.

Poland was to be a dumping ground for the “human detritus” in Europe, and this was rightly recognized as an aggressive act against Poland. Hitler had no desire to annihilate France in this way, because he didn’t hate France, and didn’t punish them with unwanted immigrants. That was done by market liberal and socialist parties in France.

When the United States defeated Germany and Japan during World War 2, despite initially considering the Morgenthau plan, they shifted to the Marshall plan in response to the growing threat of the Soviet Union. The United States did not punish either Germany or Japan with mass immigration. 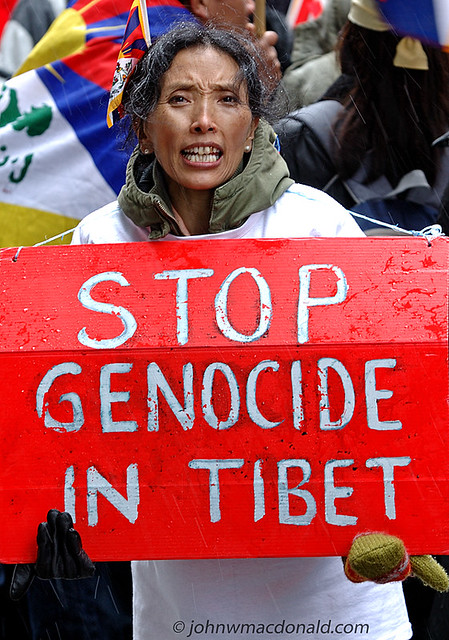 The Chinese invasion of Tibet ripped down Tibet’s immigration barriers, and the Chinese government encouraged Chinese people to move into Tibet. This program of displacement was rightfully seen by the world as an aggressive act, a human rights violation and “cultural genocide”.

In 2010, Libyan dictator Muammar Gaddafi threatened to make Europe “another Africa” if he did not receive 5 billion Euros. He said:

“We don’t know if Europe will remain an advanced and united continent or if it will be destroyed, as happened with the barbarian invasions”

Italian MP Silvana Mura recognized this blackmail as mafia-style tactics, correctly realizing that mass immigration would be a form of violence inflicted on Europe.

More recently, ISIS forces in Libya, which control the center of Libya, have threatened to send 500,000 Africans into the Mediterranean toward Italy, which would be most of the roughly 700,000 on the coast waiting to board. ISIS recognizes that a mass influx of Africans would harm Europe and view them as a destructive military force.

Emmanuel Agius, the Deputy Mayor of the city of Calais in France, which is 21 miles across the English Channel from Dover, threatened to “let the migrants through” the Channel Tunnel into the UK. This was in response to some comments made by David Cameron about sending troops to Calais.

In Dresden, following activism by the newly established organization “Patriotic Europeans Against the

Islamisation of the West”, Angela Merkel allocated a city park in Dresden to 2,000 non-Germans, called “refugees”. This was done overnight with zero consultation with the Dresden city council. The “refugees” were about 79 percent male and 12 percent female, not including the 8 percent who were children.

Israel’s Muslim enemies have a similar strategy known as Al-Hijra, which is the name of the Muslim Brotherhood’s doctrine of mass Muslim immigration. Our friend Gaddafi once again states the situation plainly:

“There are signs that Allah will grant victory to Islam in Europe without swords, without guns, without conquest. We don’t need terrorists, we don’t need homicide bombers. The 50+ million Muslims [in Europe] will turn it into a Muslim continent within a few decades.”

It is also arguable that the Palestinians are being positioned as a demographic bomb against Israel somehow – either through “unification” of the country rendering Jews in Israel a minority, or through somehow destroying Israel’s borders.

The Free State Project can be described as libertarian immigation. Their goal being to move en masse to

This is out of a mere 1,791 “early movers” and 2,532 “in-state friends” of the project, in a state which has a population of 1.33 million. So their number of seats won per capita is a testament to just how politically active they are.

It is odd that these libertarians can understand that demographics is destiny in the case of New Hampshire, but not with the “Reconquista” of the southwestern United States. Although really we should be so lucky as to merely have to cede the southwest US to Mexico or to release Aztlan, as they do far more damage influencing policy in their coalition with Africans and idiot whites. To amputate would be to get off easy.

Mass immigration is a form of biological warfare. But its conquest is far more vicious and permanent than anything the British did in Africa or the Soviet Union did in Eastern Europe and Central Asia. “Genocide” is probably hyperbolic, but it is destruction of a people as an independent group in a way that a military occupation by itself does not do.

Never in history has it been seen as anything but, and in tense situations when one lacks the mental energy to maintain PC filters, even parrots of University Social Science Consensus will reveal that they see mass immigration as a violent act as they threaten and punish their opponents with African “refugees”.

The chart shows that for every 1 net American born to today’s population—births minus deaths—the federal government will add 7 more people to the country through future immigration. 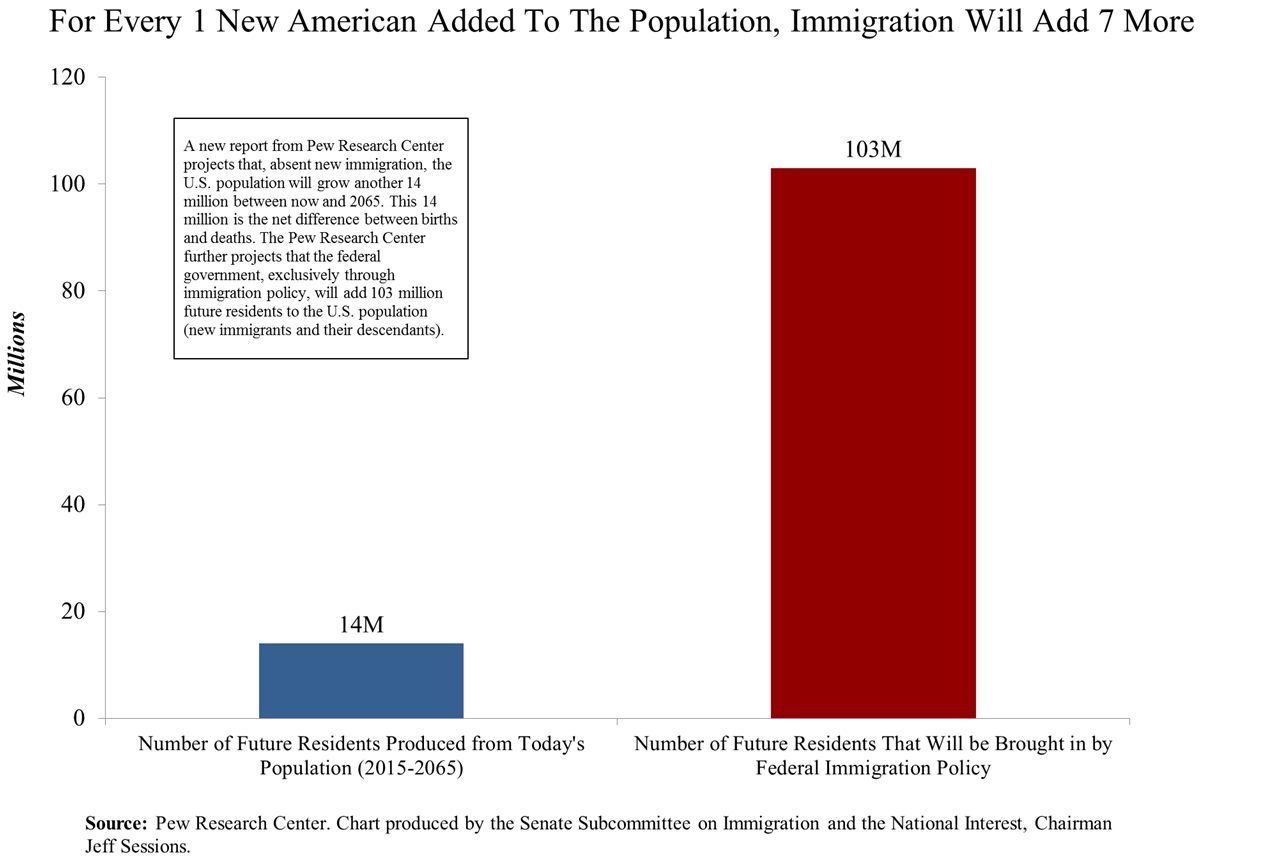 In 1970, fewer than 1 in 21 Americans were foreign-born; today, nearly 1 in 7 are foreign-born. The United States has taken in four times more worldwide immigrants than any other nation on Earth. Over the next five decades, Pew projects that new immigration, including the descendants of those new immigrants, will add 103 million to the current U.S. population

Pew research found that, by more than a 3-1 margin, Americans wished to see immigration rates reduced – not raised. Unless such reductions are enacted, the foreign-born share of the U.S. population will soon eclipse the highest levels ever recorded in U.S. history and will keep climbing to new all-time records every decade of the 21st century. Pew projects that by 2065, more than 1 in 3 U.S. residents will either be foreign-born or have foreign-born parents, assuming no law is passed to reduce immigration rates.

Sen. Jeff Sessions (R-AL), the chairman of the subcommittee, responded to the startling data his committee uncovered by telling Breitbart News there should be immigration controls put in place immediately.

“We should not admit people in larger numbers than we can reasonably expect to vet, assimilate, and absorb into our schools, communities, and labor markets,” Sessions said. “It is not compassionate but uncaring to bring in so many people that there are not enough jobs for them or the people already here. Over the last four decades, immigration levels have quadrupled.

In Case You Missed It:  Goya Foods CEO says “we are on the precipice of a global food crisis”
Posted in Freedoms and tagged Border, Genocide, Illegal Immigration, Immigration.

Right Now There Are 102.6 Million Working Age Americans That Do Not Have A Job

By Michael Snyder The federal government uses very carefully manipulated numbers to cover up the crushing economic depression that is...